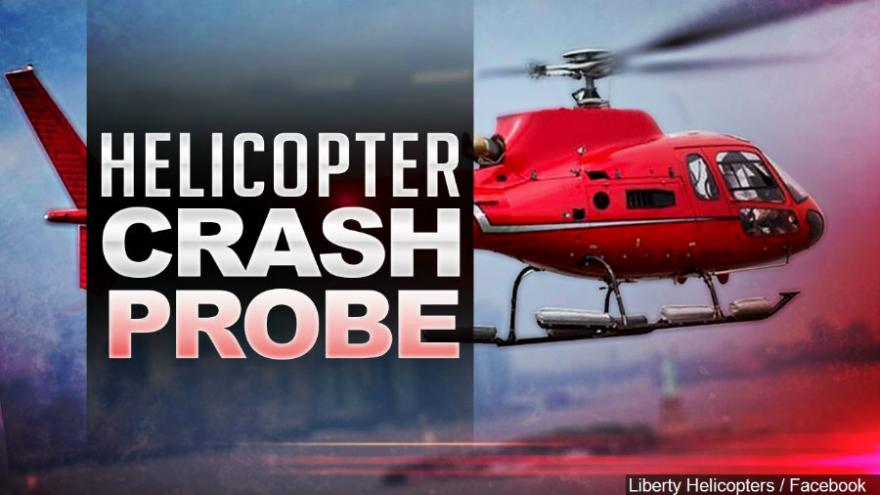 "Safety has been a concern amongst my clients for a while now," attorney Debra Katz said. "They also have a tremendous concern about retaliation within both companies."

Five people died when the Liberty Helicopters chopper crashed on March 11. The pilot, who managed to free himself, was the sole survivor.

The passengers had chartered the trip for a private photo shoot through FlyNYON, a tourist helicopter company.

The helicopter, with the doors removed so passengers could take unobscured photographs, had engine problems and crashed in the East River.

The pilots were not identified, but Katz said some still work at Liberty Helicopters and others had been employed by the company.

But executives at FlyNYON "bristled at the pilots' concerns, insisting that the operation" was safe, The New York Times reported, citing internal documents.

In a statement to the newspaper, FlyNYON CEO Patrick K. Day disputed the claim "that anyone at FlyNYON did not heed issues raised by pilots" at Liberty Helicopters and that management "failed to respond to safety concerns."

CNN has reached out to Day, Liberty Helicopters and FLYNYON for comment, but has not yet heard back.

It was Liberty Helicopters' third crash in the past 11 years.

The commercial air tour industry is facing increasing scrutiny after the crash.

After what experts described as years of scant oversight, the Federal Aviation Administration is conducting a top-to-bottom review of its rules governing the industry.

The FAA issued an order suspending "doors off" flights involving "restraints that cannot be released quickly in an emergency."

The NTSB had said the harness used by the passengers on the chopper was not evaluated by the FAA. The system was not installed by Liberty Helicopters but was a collection of "off-the-shelf components" provided to the passengers by FlyNYON, the agency said.

The level of instruction offered to passengers has also come into question since there's no requirement to specifically instruct passengers on escaping harnesses during an emergency.

"This accident has the potential to be a watershed event for the industry," Peter Goelz, a former managing director of the National Transportation Safety Board had said.

Before the crash, the pilot "observed engine pressure and fuel pressure warning lights and believed he had experienced an engine failure," according to a preliminary report by the National Transportation Safety Board.

As the pilot made his way to the East River to execute an emergency landing, "he reached down for the emergency fuel shutoff lever, he realized that it was in the off position. He noted that a portion of the front seat passenger's tether was underneath the lever."

The pilot attempted to restart the engine as the helicopter fell toward the river, but the engine "wasn't spooling up fast enough," leading him to turn off the emergency fuel lever again, the report says.

The NTSB said it had interviewed Liberty Helicopters' personnel, including the pilot, adding that the helicopter's engine showed no sign of abnormalities."

When the helicopter crashed, the five passengers drowned because they were unable to break free from harnesses meant to prevent them from falling out.

The pilot told NTSB investigators he provided a safety briefing to the passengers before takeoff. The briefing included a description of how to use a cutting tool to cut their restraints, the pilot said.