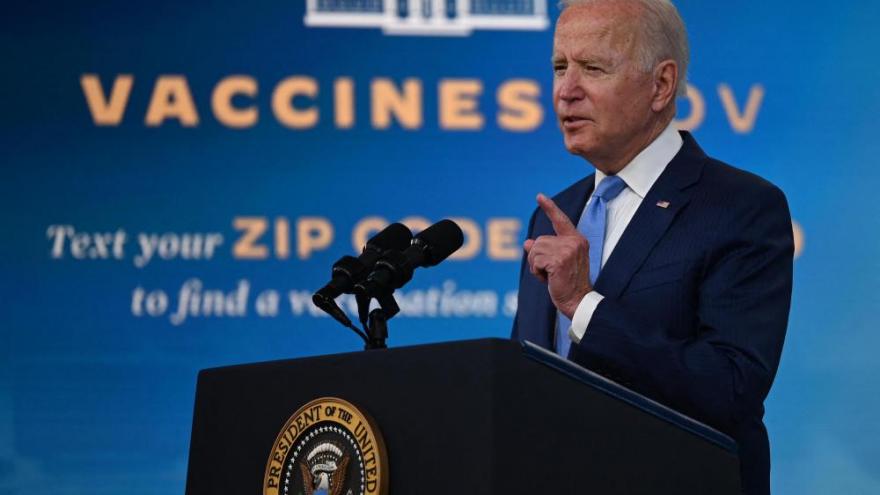 US President Joe Biden delivers remarks on the Covid-19 response and the vaccination program at the White House on August 23, 2021 in Washington,DC.

(CNN) -- Challenges to the Biden administration's vaccine mandate targeting employers with more than 100 employees will be consolidated and heard by a federal appeals court to be chosen Tuesday by a ping-pong ball lottery.

The dramatic announcement could determine the ultimate fate of President Joe Biden's most controversial push to date to ensure that as many Americans as possible are vaccinated against Covid-19, especially after the emergence of a new strain of the virus.

The selection of one appeals court to hear the challenge also highlights the ferocious battles that have played out in recent years after President Donald Trump confirmed a record number of appeals court judges during his four-year term, changing the faces of some of the courts. The Biden administration is now racing to fill remaining vacancies with judges that share President Biden's outlook on the law. The ideological gap between the 12 circuits is at times stark and Republican critics of the mandate were hoping that a conservative-leaning court, like the 5th US Circuit Court of Appeals would be randomly selected, while liberals were pushing for an appeals court with a more liberal reputation such as the 9th Circuit.

The Occupational Safety and Health Administration ,which falls under the US Labor Department, unveiled the new rules on November 4, citing its authority to issue an emergency temporary standard to protect employees if they are exposed to a "grave danger." It requires employers with 100 or more employees to ensure that their employees are fully vaccinated or undergo regular testing and wear a face covering at work. It is set to take effect January 4.

The mandate came under immediate challenge from Republican-led states and some private employers who charge that OSHA exceeded its power in issuing such a rule. After the first wave of lawsuits, liberal-leaning unions joined in too, arguing in some cases that OSHA has the authority to go further and issue a more stringent mandate. Both sides filed their disputes in circuits they thought might be the most favorable to their position. Under a statute governing OSHA, all 34 lawsuits from across the country filed in 12 different court of appeals are required to eventually be consolidated and handled by one court chosen by lottery.

The DC-based Judicial Panel on Multidistrict Litigation will conduct the lottery. Under the unusual system mandated by Congress, officials will the name of each of the judicial circuits with an active challenge on a ping pong ball which was then placed in a solid wood raffle drum. And official, with a witness, then will pull out one of the balls.

The 5th Circuit moved aggressively last week to rule on the mandate, well aware that if it wasn't ultimately chosen to hear the dispute, the Justice Department could move quickly to dissolve the order. The move may have been an attempt to influence other judges --or even Supreme Court justices -- who may ultimately rule on the case. The panel of judges on the conservative court called the mandate "staggeringly overbroad."

In a blistering 22-page opinion, the court said that the vaccine mandate is "fatally flawed" and both "overinclusive" and "underinclusive."

"Rather than a delicately handled scalpel, the Mandate is a one-size- fits-all sledgehammer that makes hardly any attempt to account for differences in workplaces (and workers) that have more than a little bearing on workers' varying degrees of susceptibility to the supposedly 'grave danger' the Mandate purports to address," the court held.