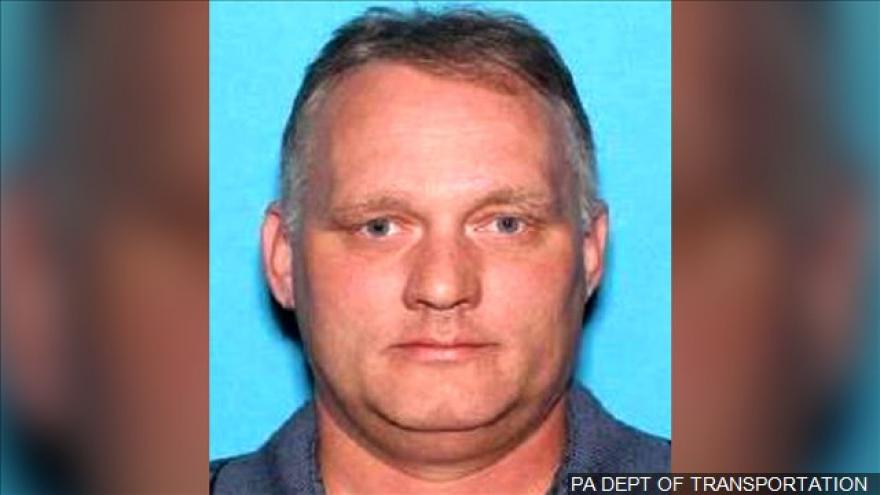 Robert Bowers, 46, is the suspect of the synagogue shooting in Pittsburgh, Pennsylvania. He\'s accused of killing 11 people and is facing 29 federal charges. Photo courtesy PA Dept of Transportation

(CNN) -- The man accused of killing 11 worshippers in a Pittsburgh synagogue is expected to appear in a federal court Monday.

Bowers was taken into custody after a shootout with police. He is being treated in a hospital for gunshot wounds.

He is scheduled to make his first court appearance at the Joseph F. Weis, Jr. US Courthouse in Pittsburgh at 1:30 p.m. ET Monday.

The US attorney in Pittsburgh, Scott Brady, is seeking approval from Attorney General Jeff Sessions to seek the death penalty against Bowers, according to a Justice Department spokesman.

When asked if the shooting could be considered an instance of domestic terrorism, US Attorney Brady said there would need to be evidence the suspect tried to propagate a particular ideology through violence.

"We continue to see where that line is. But for now, at this point in our investigation, we're treating it as a hate crime," Brady said.

Bowers has also been charged with 11 state offenses, including attempted homicide and aggravated assault.

The shooting struck the heart of Pittsburgh's historically Jewish Squirrel Hill neighborhood and reverberated across the United States, closing out a week of traumatic events with common roots in hate. President Donald Trump ordered flags flown at half-staff in honor of the victims.

On Sunday, visiting dignitaries joined community leaders, politicians and residents of the metropolitan Pittsburgh area at the University of Pittsburgh for an interfaith service. They pledged to support the community and fight hate speech.

"We will drive anti-Semitism and the hate of any people back to the basement, on their computer, and away from the open discussions and dialogues around this city, around this state and around this country," Pittsburgh Mayor Bill Peduto said.

A trail of hate leads to suspect

Sunday's vigil, the second since the Saturday morning shooting, came as a fuller picture began to emerge of the suspect.

"They're committing genocide to my people," Bowers told police during the shootout, according to an FBI affidavit. "I just want to kill Jews."

Investigators searched Bowers' home with a robot on Saturday and searched his vehicle on Sunday, the FBI said. They're looking for surveillance footage from the area that could provide clues.

For weeks before the shooting, Bowers targeted Jews in frequent posts on Gab, a social media platform that bills itself as "the free speech social network." He used anti-Semitic slurs, complained that President Donald Trump was surrounded by too many Jewish people and blamed Jews for helping migrant caravans in Central America.

Four hours before the shooting, Bowers posted about Trump. Minutes before storming inside the building, he logged onto Gab again and wrote to his followers.

"I can't sit by and watch my people get slaughtered," he wrote. "Screw your optics, I'm going in."

Gab denied supporting violence and said its mission is "to defend free expression and individual liberty online for all people." Gab said it has backed up the suspect's profile data, suspended the account and contacted the FBI.

The victims have been identified

Robert Jones, the FBI special agent in charge of the Pittsburgh office, called the shooting "the most horrific crime scene" he'd witnessed in 22 years with bureau. It began as a peaceful morning as dozens of people filed inside the building to celebrate Shabbat services with three congregations, Tree of Life, Dor Hadash and New Light.

Rabbi Hazzan Jeffrey Myers with Tree of Life said the shooting began shortly after he started services at 9:45 a.m.

"My holy place has been defiled," he said at Sunday's service. He vowed to rebuild his congregation and called on those in the audience to do their part.

"Words of hate are unwelcome in Pittsburgh. It starts with everyone in this room, and I want to address for a moment some of our political leaders who are here. Ladies and gentlemen, it has to start with you as our leaders," he said to a standing ovation.

"My words are not intended as political fodder, I address all equally. Stop the words of hate."

Authorities on Sunday released the names of the 11 victims, all of whom were from Pennsylvania. They included a married couple, a pair of brothers and a beloved physician.

One officer was released Saturday and three remain in the hospital. All four were "in good spirits" when visited by a union representative on Saturday, said Robert Swartzwelder, president of the Pittsburgh Fraternal Order of Police.

Squirrel Hill residents heard screams and gunshots coming from the synagogue. In minutes, police officers in tactical gear arrived and urged them to stay indoors.

Police said they received 911 calls about an active shooter around 10 a.m., five minutes after Bowers made his last social media post. When officers entered the building, they found the victims' bodies and survivors hiding. They rescued at least two people from the basement and scrambled to evacuate people as they looked for the gunman.

Two officers encountered the gunman as he was attempting to leave the building, according to a criminal complaint. The gunman fired at them, shooting one officer in the hand before fleeing back inside the synagogue. The other officer suffered several cuts to his face from shrapnel and broken glass.

SWAT officers found Bowers on the third floor of the building and exchanged gunfire with him until he surrendered, authorities said. Two SWAT officers were injured in the gunfight, along with Bowers.

Bowers used a Colt AR-15 rifle and three Glock .357 handguns during the attack, police said. Bowers legally purchased the three Glock .357s, a law enforcement official familiar with the investigation told CNN. It's not clear whether the AR-15 was purchased legally.

In addition to those four guns, investigators recovered a shotgun in the alleged shooter's car that was not used in the shooting, Doyle said, referencing information he learned from law enforcement briefings.

Jewish organizations said the violence at Tree of Life synagogue underscored the dangers of unchecked hatred in a time when anti-Semitic acts are on the rise.

In 2017, anti-Semitic incidents in the United States surged nearly 60%, according to the Anti-Defamation League. It found 1,986 cases of harassment, vandalism or physical assault against Jews and Jewish institutions last year. The ADL said Saturday's shooting is the deadliest attack on the Jewish community in US history.

The United States Holocaust Memorial Museum said the shooting is a reminder of "all the dangers of unchecked hatred and anti-Semitism, which must be confronted wherever they appear."

"Nearly 80 years since Kristallnacht, when the Jews of Europe perished in the flames of their houses of worship, one thing is clear: Anti-Semitism, Jew-hating, is not a distant memory," Bennett said. "It's not a thing of the past, nor a chapter in the history books. It is a very real threat."

Adam Hertzman, director of marketing for the Jewish Federation of Pittsburgh, said it was too early to say if the community will add permanent security to synagogues in the area.

"Our focus at the moment is on mourning those who have passed and trying to comfort the people who are bereaved," Hertzman said.