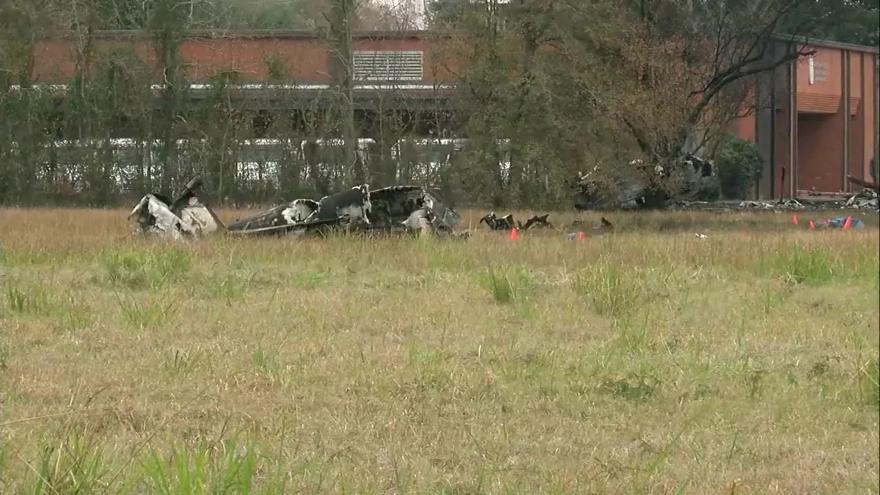 (CNN) -- No distress call was sent from the airplane that crashed in Lafayette, Louisiana, killing five people on board, an official with the National Transportation Safety Board said at a Sunday briefing.

There was no distress call from the aircraft, he said, and no flight data was recorded on the aircraft.

The cause of the crash is unknown and at this point of the investigation "there's not a lot to go on," Landsberg said.

The eight-passenger plane left Lafayette Regional Airport, about 130 miles west of New Orleans, and was headed to Atlanta, where Louisiana State University played -- and beat -- the University of Oklahoma in the NCAA's Peach Bowl.

Weather conditions at the airport were listed as foggy throughout Saturday morning, according to the National Weather Service. The FAA control tower reported visibility was about three-quarters of a mile with 5 knots of wind, Rodi says.

Three people were injured on the ground, Lafayette Fire Chief Robert Benoit said in a news conference. Two were treated for smoke inhalation and are doing fine, he said.

Alton Trahan, fire department spokesperson, identified one of the people injured on the ground as Danielle Britt.

He said Britt had just driven into the post office lot when the plane crashed, causing her vehicle to flip upside down. Britt extricated herself from the burning vehicle, Trahan said.

Britt was taken to the University Medical Center in New Orleans, he said. Details on her condition were not immediately known. CNN has reached out to her family.

Bystanders rushed to help victims of the crash in the minutes before first responders arrived, Trahan said.

A sports reporter and a tech executive among victims

The New Orleans Pelicans began their Saturday game with a moment of silence for McCord, their in-game host.

She was a sports reporter with the television station WDSU in New Orleans and the daughter-in-law of Louisiana State University Offensive Coordinator Steve Ensminger, the station said.

"Carley's passion for sports journalism and her deep knowledge of Louisiana sports, from high school to professional ranks, made her an exceptional journalist," WDSU president and general manager Joel Vilmenay said. "As we reflect on her impressive body of work, we offer our deepest condolences to her family."

Crispwas an executive for nearly 10 years at Global Data Systems, an IT company based in Lafayette.

"Vaughn has more than 30 years of experience in the telecommunications and data industries, from field tech for a local telephone company to successfully building his own cabling business," his company bio states.

The vice president of sales at the company, Wade Berzas, survived the crash. He is in critical condition, Lafayette Fire Department spokesman Alton Trahan said in a news release.