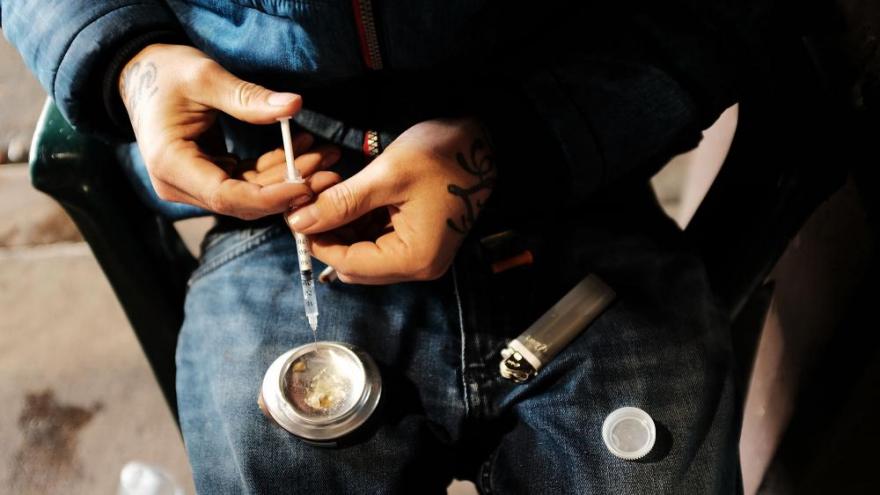 Plans to open a Philadelphia facility that would allow and supervise the injection of illegal drugs have been put on hold. A man uses heroin under a bridge where he lives with other addicts in the Kensington section of Philadelphia which has become a hub for heroin use on January 24, 2018 in Philadelphia, Pennsylvania.

(CNN) -- Plans to open a Philadelphia facility that would allow and supervise the injection of illegal drugs have been put on hold.

On Thursday, the nonprofit group looking to open the site, Safehouse, delayed the opening to have "community conversations" with concerned neighbors. Then the building owner decided to not move forward with the lease.

"The concerns we were hearing from the neighbors were apparently too much for the landlord," Safehouse Vice President Ronda Goldfein told CNN, "and he canceled after we delayed."

Safehouse planned to open the facility -- which would have been the first of its kind in the US -- next week for four hours a day Monday through Friday.

News of the delay came after a federal judge ruled Wednesday the facility could open in South Philadelphia. Last February, a US Attorney in Pennsylvania sued Safehouse, saying the injection sites violated federal law.

In a letter to its tenants Thursday, building owner Constitution Health Plaza confirmed it had canceled the plans.

Initially, Constitution Health Plaza wanted to "play a positive role in providing an innovative way to bring needed services to those suffering from addiction," the letter said. "As one of the largest institutions in our community, we felt we had a responsibility to do something to save lives."

The letter went on to thank the tenants for their "honest communications" with the company in recent days.

"We want you to know that we have listened. We apologize," the letter said. "And we want to ensure open lines of communication moving forward."

Constitution Health Plaza went on to thank Philadelphia Mayor Jim Kenney and Safehouse for their work aimed at addressing the opioid crisis.

Some were opposed to safe-injection site

Safe-injection sites are meant to get heroin, fentanyl and other drug use the streets and into supervised facilities. Organizers hope such facilities will prevent overdose deaths, prevent the spread of HIV and Hepatitis C, limit drug-related crime and litter, and offer social, legal and housing services.

"The goal is to get people off the street, save their lives and get them into treatment when they're ready," said Goldfein, who also serves as the executive director of the AIDS Law Project of Pennsylvania.

Goldfein said at a news conference Wednesday that Safehouse would operate the safe-injection site and it would be privately funded.

But local residents interrupted parts of the news conference to express their opposition. One argued drug users would bring crime and dealers. City Councilman Mark Squilla, who initially supported the initiative, accused Safehouse directors of choosing a location under "the cloak of darkness" without consulting the council or residents.

"There's really no safe way to do this, and our goal should be trying to get people treatment," Squilla told CNN.

Kenney supported the safe-injection site and publicly endorsed the concept in early 2018. In a statement Thursday, the mayor said the decision will give Safehouse more time to examine options and engage the community.

"It will allow those with concerns more time to get answers," he said. "And it will allow everyone to take a deep breath and focus on the ultimate goal of this effort: to save the lives of fellow Philadelphians who are struggling with addiction."

In January 2019, the National Safety Council found that, for the first time on record, the odds of dying from an opioid overdose in the US are now greater than those of dying in a vehicle crash.