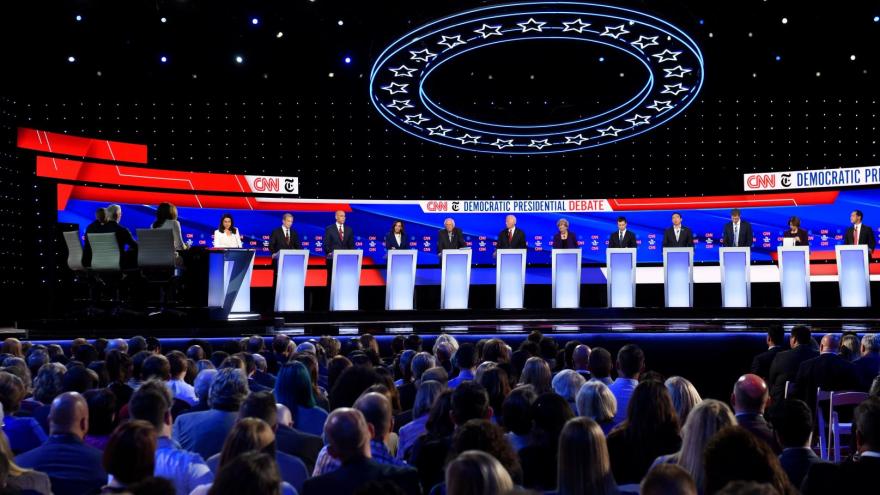 Democratic presidential hopefuls participate in the fourth Democratic primary debate of the 2020 presidential campaign season co-hosted by Democratic candidates shown at the New York Times and CNN debate at Otterbein University in Westerville, Ohio, on October 15, 2019. The podium order for the CNN/Des Moines Register Democratic presidential debate has Former Vice President Joe Biden and Sen. Bernie Sanders center stage with Sen. Elizabeth Warren to the left of Biden, and Pete Buttigieg to the right of Sanders. Tom Steyer will stand next to Warren, and Sen. Amy Klobuchar will be next to Buttigieg.

Sen. Elizabeth Warren of Massachusetts will be to the left of Biden, and former South Bend, Indiana, Mayor Pete Buttigieg will be to the right of Sanders. Businessman Tom Steyer will stand next to Warren, and Sen. Amy Klobuchar of Minnesota will be next to Buttigieg.

The debate, which will air on Tuesday at 9 p.m. ET exclusively on CNN, is the final face-to-face gathering of the candidates before the February 3 Iowa caucuses. CNN's Wolf Blitzer and Abby Phillip, as well as The Des Moines Register's Brianne Pfannenstiel, will moderate the debate at Drake University in Des Moines, Iowa.

The podium order was based on an average of qualifying polls released in January. Candidates with the highest averages were placed in the center of the stage.

In order to qualify for the debate, candidates needed to meet polling and fundraising minimums, which had been raised from the previous debate -- which took place in December -- by the Democratic National Committee. Candidates were required to have received 5% in at least four DNC-approved national or early-voting-state (Iowa, New Hampshire, South Carolina, Nevada) polls, or 7% in two early state polls. Candidates also needed to have received donations from at least 225,00 unique donors and a minimum of 1,000 unique donors per state in at least 20 states.

The deadline to qualify for the debate was Friday.

The debate will stream live in its entirety, without requiring log-in to a cable provider, exclusively on CNN.com's homepage; across mobile devices via CNN's apps for iOS and Android; via CNNgo apps for Apple TV, Roku, Amazon Fire, Chromecast and Android TV; and at DesMoinesRegister.com.

The full debate will be available exclusively the day after the airing on demand via cable/satellite systems, on CNNgo (at CNN.com/go on your desktop, smartphone and tablets, and via CNNgo OTT apps) and CNN mobile apps on iOS and Android.