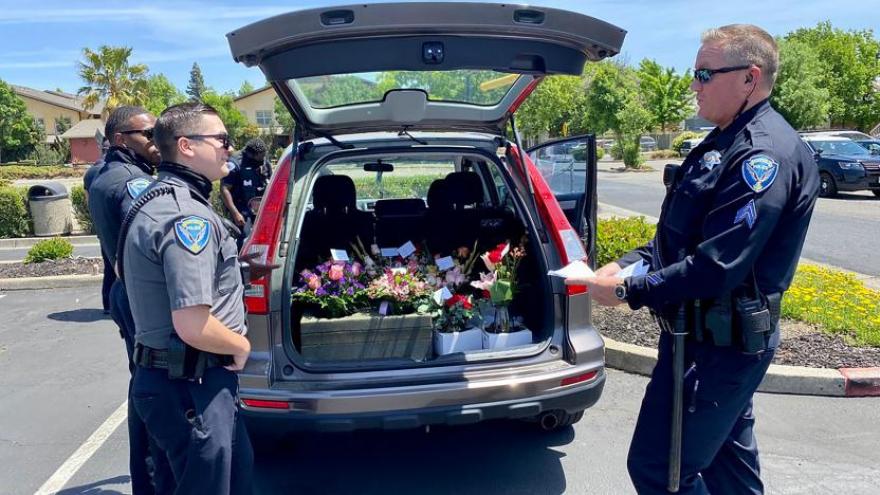 Fairfield, California, police officers delivered flowers on Mother's Day after arresting the delivery driver for driving under the influence.

(CNN) -- Police officers responding to a collision in Fairfield, California, made sure nothing got in the way of moms in the area receiving their Mother's Day flowers.

Lt. Jausiah Jacobsen told CNN no one was hurt in Sunday's crash, which caused "very minor damage." Police arrested the driver they said was at fault for driving under the influence. When taking inventory, they noticed around 10 bouquets of flowers in the vehicle.

Jacobsen said one of the officers jokingly suggested they deliver the flowers, but the officers soon realized it was actually possible. An invoice showed where the flowers were supposed to go, so the officers divided up the deliveries geographically, and delivered them throughout the Fairfield area in about a couple of hours.

"Our thought was that we could just leave them there and then the people that paid for them would be out the money. The people that were supposed to get them would be out it," Jacobsen said. "They're just going to go bad obviously sitting in the car so this is what we can do to try to help out everybody and still give some cheer for a bunch of mothers on Mother's Day."

Jacobsen said some people were at first skeptical that police would be delivering flowers, thinking it was a joke or a prank. But once they realized it was true, everyone was "shocked in a positive way."