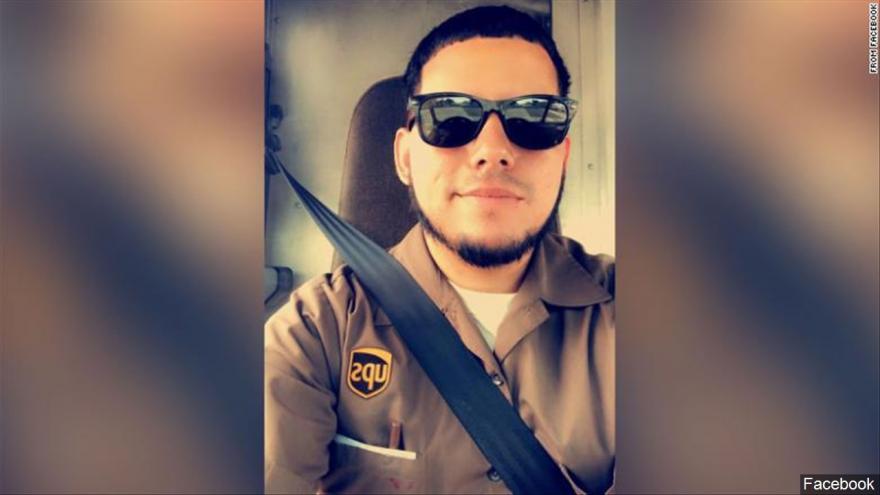 (CNN) -- The scene was a nightmare: After a long, televised police chase of a hijacked UPS truck ground to a halt at a jammed South Florida intersection, gunfire erupted seemingly from everywhere Thursday evening -- with stunned motorists' vehicles serving as officers' impromptu shields.

Gunfire exploded toward and from the truck. A bystander crouched on a median, then scrambled away as officers closed in.

In the end, four people were shot dead at the intersection in Miramar, authorities said, including two robbery suspects, a bystander, and hostage UPS driver Frank Ordonez -- a man who relatives say had been subbing for a colleague who had called out from work that day.

Numerous questions about the chase and its finale remain, including from Ordonez's stepfather, who says he can't understand why his stepson is dead.

"For this to happen, I think, is just unnecessary," Joe Merino told NBC's "Today" show Friday morning. "Other tactics should have been applied, and they weren't, so when I say the word devastated, it's an understatement."

The chase began with a jewelry store robbery

Police got a call about a silent holdup alarm at 4:17 p.m. from Regent Jewelers in Coral Gables, city Police Chief Edward J. Hudak Jr. said. At least one woman was hurt in the robbery, police said.

The suspects then hijacked the UPS truck, took the driver hostage and sped away.

Soon after, police received a call of gunshots -- believed to have been fired by the escaping suspects, Hudak said -- at Coral Gables City Hall, just within sight of the jeweler's shop. A bullet struck the building, which went into lockdown.

A long chase on a highway and city streets

The UPS truck then fled over at least 25 miles, through city streets and along an interstate. Police caught its trail, and some of their pursuit unfolded on local television as news helicopters captured the scenes from above.

Police radioed that gunfire occasionally erupted from the truck -- its back doors sometimes open -- even as police chased it on or near I-75, CNN affiliate WSVN reported.

The truck hopped curbs, spun U-turns and maneuvered around other vehicles and police.

Emergency vehicles trailed the hijacked truck, stretching at one point for about half a mile.

Then, as the truck approached the intersection of Miramar Parkway and Flamingo Road in Miramar around 5:35 p.m., the chase ground to a halt. Traffic was stopped, and the truck was boxed in. More than 40 emergency vehicles, their lights flashing, queued up in its wake.

Shots rang out as officers closed in

Police officers jolted from their vehicles and approached the UPS truck, weapons drawn. They used cars -- their own and bystanders' -- as shields so they could land in better position.

The person driving the UPS truck left the steering wheel.

Then, shots rang out, though who fired first -- someone inside the truck or police -- remains an open question.

Muzzle flashes could be seen inside the truck, helicopter footage from WSVN shows. Smoke began to rise.

Then, gunfire exploded, seemingly from everywhere, a video recorded by someone in a car and posted to Twitter shows.

A bystander in a median crouched, then scurried away as officers moved in all around, the video shows.

Then, no more than a minute later, the bedlam turned to quiet.

Police haven't released the names of the four people who were killed; Ordonez's family revealed his fate and name.

Whether the UPS driver and the slain bystander were shot by police is under investigation, FBI Special Agent in Charge George Piro said. The Bureau of Alcohol, Tobacco, Firearms and Explosives also is investigating, Hudak said.