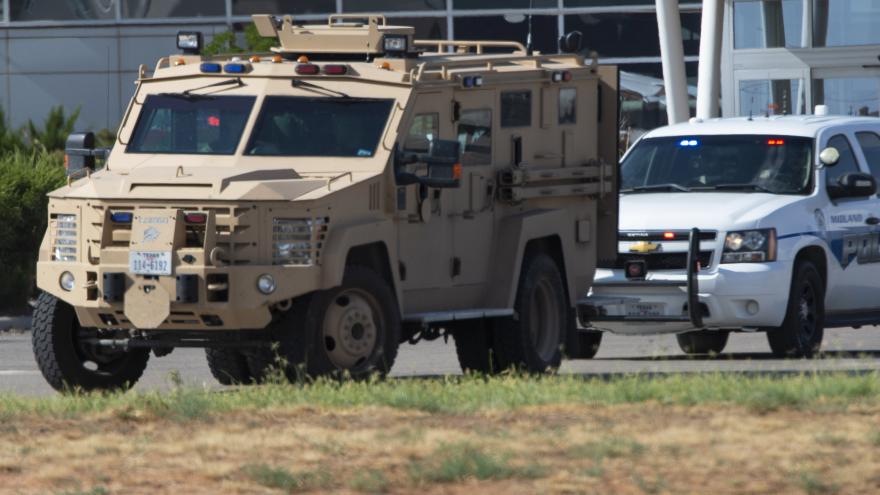 Her son had refused to take his mental-health medication. He was delusional about a government conspiracy against him and had threatened to end his own in life in a shootout with police.

When Amarillo, Texas, police officers arrived at her home the night of February 7, 2011, they found what they interpreted as preparations for an attack -- a machete hidden in her son's bed and an underground shelter he had dug in the backyard. In a recording the mother shared with police, her son declared, "911 will bow down before me."

The officers were so troubled by what they encountered that they recorded floor plans of the property and shared the information with the city's SWAT team, according to incident reports. The woman's then-28-year-old son, they concluded, was volatile and might hurt somebody someday.

Those concerns were tragically realized when the woman's son—Seth Ator—engaged police in a wild shootout not unlike what officers feared might happen eight years earlier.

Ator killed seven and wounded 25 in last month's shooting rampage in West Texas. He was also killed in the shootout.

The 2011 incident reports, obtained by CNN through a records request, raise additional questions about whether more could have been done to prevent Ator's shooting spree in the cities of Midland and Odessa, and about how Ator, who once failed a background check for an attempted firearm purchase, acquired the AR-15-style rifle he used in the attack.

Supporters of gun control say deadly assaults such as Ator's might be avoided, if legislators implemented a universal background check for all gun transactions and embraced so-called red-flag laws, also known as extreme risk protection orders, which allow police or family members to ask courts to temporarily remove guns from individuals at risk of harming themselves or others.

In their 2011 encounter with Ator, police were clearly concerned. "There seemed to be some indication of some planned stand-off with police," one of the responding officers wrote in a report.

Another officer stated in an incident report at the time that he believed Ator "will attempt to harm the police and the public."

When police notified Ator's mother that they had located a machete in his bed, she was alarmed. She said her son had previously said he planned to kill her and family friends with a machete, police reports state. She also told police that Ator said he had access to a shotgun and armor-piercing bullets, though they did not locate any, the records show.

After inspecting the home, officers transported Ator to a hospital, where he was medicated and admitted to The Pavilion, a mental health treatment facility, according to the report.

Police reports note that while in that facility Ator told security, "The police can't be everywhere." An officer stated, "I took this as a threat against the public."

The day after Ator's mother called police, an officer took photographs of the property and shared those images as well as a report about their encounter with Ator with the department's SWAT team, according incident reports.

Two days later, Ator's mother notified police that The Pavilion was releasing her son. Records do not indicate she reported additional issues.

Attempts by CNN to interview Ator's mother were unsuccessful.

In an interview with CNN, Amarillo Police Department Chief Ed Drain described the records of his department's prior interactions with Ator as "disturbing," but he says he doesn't know what more Amarillo police could have done to prevent last month's shooting.

"It's clear that the shooter had mental problems, but we have something called the Constitution, and that prohibits us from just locking people up," said Drain, who joined the department as chief in 2016, after the interactions with Ator. "Broad criteria like these threats are not enough to bring criminal charges."

"This shooter fell off our radar," said Drain. He added, "we did deal with him before and we took all precautions. I don't know what could have been done about Midland and Odessa, which are four hours away."

The incident involving Ator and Amarillo police in 2011 was just one of at least a dozen interactions law enforcement in Texas had with Ator or others reporting concerns about him before the shooting in August, not including traffic-related incidents, according to records reviewed by CNN.

Those records indicate Ator had struggled with mental health challenges throughout his life.

In 2001, Ator attempted suicide and was hospitalized, records show. Days later, he became so "uncontrollable" at a psychiatric facility in Waco, Texas that nurses had to lock themselves in a room, according to another police incident report. When an officer arrived to assist the facility's security, Ator approached the officer holding a pipe and the officer sprayed Ator in the face with pepper spray to detain him.

Ator had also been committed to an unidentified institution in McLennan County in 2006 because he was deemed a danger to himself and/or others, CNN previously reported.

In 2012, an officer in Amarillo noted that Ator displayed "behaviors of mental health issues" after he reported that people had been photographing him for years without his permission, according to another police report.

Ator failed a background check during an attempted firearm purchase in 2014 because he had earlier been adjudicated "a mental defective" and temporarily committed to an institution, three law enforcement sources previously told CNN.

Despite failing a background check, Ator managed to buy the firearm he used in last month's attack in the last couple of years. Federal investigators searched a home in Lubbock associated with the alleged seller of the firearm earlier this month.

Because the transaction was a so-called private sale, the seller is not required to conduct a background check on the buyer, which is required in sales by licensed gun dealers.

Adelyn Allchin, senior director of public health and policy for the Coalition to Stop Gun Violence, said Ator's case highlights the need for federally mandated universal background checks, where all firearm transactions include background checks, as well as red-flag laws.

Seventeen states and the District of Columbia have adopted red flag laws. Texas has no such law.

Allchin said Ator "had a history of threatening violence and that is a clear indicator of someone who should be getting an extreme risk protection order. These types of laws are in place for these exact situations."

Like Ator's mother, Patrick Crusius' mother also called police with concerns about her son, who allegedly killed 22 people in El Paso, Texas in August. CNN previously reported that Crusius' mother contacted police because she was worried about her son owning a firearm given his age, maturity level and lack of experience handling such a firearm, which attorneys for the family said he was legally allowed to purchase.

In the wake of a string of mass shootings this summer, discussions about legislative actions to reduce gun violence have intensified on Capitol Hill.

The House Judiciary Committee voted earlier this month to approve several bills, including red-flag legislation and a measure to ban high-capacity magazines, though it's unclear what gun control legislation the GOP-controlled Senate would take up and what President Trump would support.

James Densley, a professor of criminal justice at Metropolitan State University in St. Paul, Minnesota, said based on the available information, police shouldn't be blamed for not doing more to prevent the shootings in Midland and Odessa.

He said to reduce gun violence, in addition to red-flag laws and other firearms controls, police need additional resources, such as increased partnerships with mental-health experts, to assist in handling such situations, especially if no crime has been committed.

"Law enforcement are often asked or expected to do things outside of their capacity," Densley said. "We need to increase the number of options they have."

Jeffrey Swanson, a professor in psychiatry and behavioral sciences at Duke University School of Medicine, agreed that it's unfair to retrospectively conclude that an act of violence should have been predicted and prevented.

He said a core issue is that individuals prohibited from possessing firearms in the US can easily acquire guns through private sales or other means without background checks.

"We have a policy problem," Swanson said. "If you go to all the effort to limit a risky person's ability to buy a gun from a licensed dealer but he's living in a state with guns all over the place it's not going to do much good."