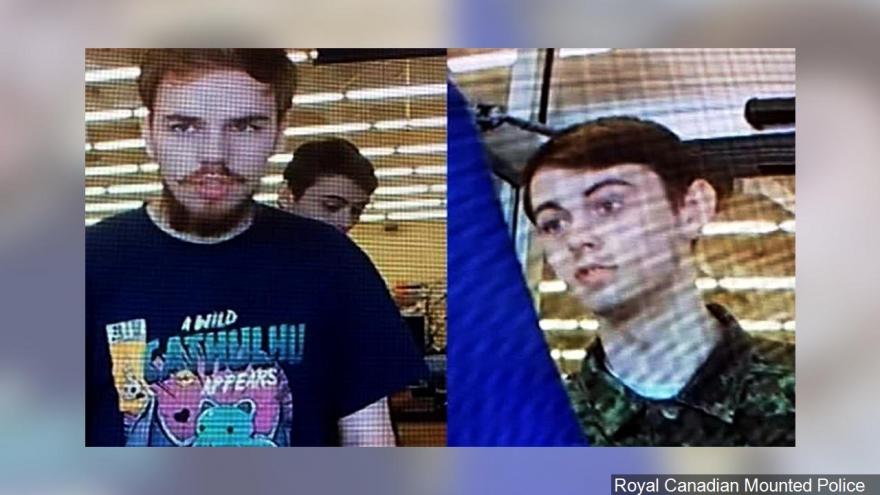 (CNN) -- Authorities in Canada announced Wednesday that they will begin scaling back efforts to locate two teenage murder suspects believed to be hiding in a remote and inhospitable region of northern Manitoba.

Police in Canada have used helicopters, drone and even military resources in the hunt for Kam McLeod, 19, and Bryer Schmegelsky, 18, who are suspected of killing a university botanist and a road tripping young couple last month.

At a press conference in Winnipeg, Wednesday, Manitoba Royal Canadian Mounted Police (RCMP) Assistant Commissioner Jane MacLatchy said there had been no recent confirmed sightings of the two young men, whose burned out vehicle was located on July 22.

According to MacLatchy, the RCMP have searched more than 11,000 square miles (28,489 square kilometers) and would now begin to reduce their search efforts over the next week, including a phased withdrawal of some specialized personnel.

"I know that today's news is not what the families of the victims and the communities of northern Manitoba wanted to hear. But when searching for people in vast, remote and rugged locations, it is always a possibility that they are not immediately located," said MacLatchy.

MacLatchy, who described the terrain in northern Manitoba as "immense and unforgiving," said an unspecified number of officers would remain in the town of Gillam to continue to investigation.

"I want to assure everyone that the RCMP is continuing to work on this investigation and will not stop until there is a resolution," said MacLatchy.

McLeod and Schmegelsky are suspected of killing Chynna Deese, a 24-year-old American, and Lucas Fowler, her 23-year-old Australian boyfriend, whose bodies were found on a remote Canadian highway close their Chevrolet van, on July 15 near Liard Hot Springs in northern British Columbia.

The two men have also been charged with second-degree murder in the death of Len Dyck, a lecturer at the University of British Columbia, whose body was found about 300 miles (482 kilometers) from the away from the murdered couple, on July 19 near Dease Lake in British Columbia.

The young Australian-American couple had been traveling across the region to visit Canada's national parks when they were killed. "To lose someone so young and vibrant, who was traveling the world and just enjoying life to the full, is devastating," Fowler's family said in a short statement after learning the news.

Police found Dyck's body about a mile (1.6km) from where a vehicle and camper belonging to McLeod and Schmegelsky were found burning on the side of Highway 37.

Dyck was a sessional lecturer in the University of British Columbia's Department of Botany and a research associate at the university's DeWreede Lab, and his research focused on seaweeds.

"The UBC community is shocked and saddened by this news and we offer our deepest condolences to Mr. Dyck's family, friends and his colleagues at the university," the university said.

The RCMP said earlier that they were searching cottages, cabins, waterways and other areas in Manitoba province for the two teenagers, after the pair were sighted in the area in late July.

A second burnt-out vehicle belonging to the suspects was also found in the area of Gillam in Manitoba on July 22.