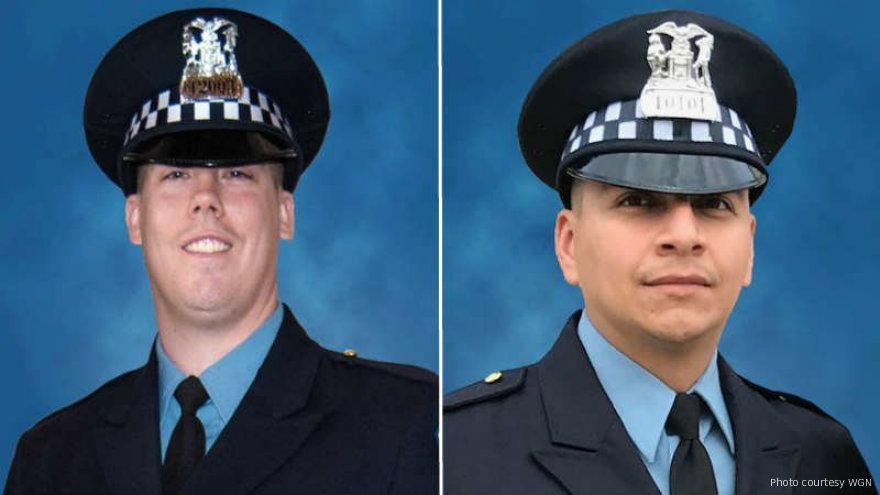 By Nancy Loo and Courtney Cousman

Chicago, IL (WGN) -- Two Chicago police officers were struck and killed by a train Monday while searching for a suspect in a shooting on the city’s South Side.

36-year-old Eduardo Marmolejo and 31-year-old Conrad Gary were responding to a call of shots fired at 103rd Street and Dauphin Avenue just after 6 p.m. Monday.

When officers arrived, a suspect made his way onto the tracks and the officers pursued.

Police said the two officers were searching the elevated tracks when they saw and heard a northbound train approaching on a different track.

Police said that train drowned out a southbound South Shore commuter line train that was approaching them from the other direction.

The two officers were hit from behind.

“There they were responding to shot spotter, doing their job trying to protect the rest of us,” Chicago mayor Rahm Emanuel said.

Chicago police said officers’ body cam footage showed Officers Marmalejo and Gary communicating with each other up to the moment when they were hit.

Throughout the night, a force of Chicago police worked to painstakingly retrieve the remains of officers Marmalejo and Gary.

Superintendent Johnson was among them as well as the first deputy superintendent, police chiefs, commanders, and detectives.

“It’s been an immensely difficult year for the Chicago Police Department. Especially for the men and women of the 5th District,” Police superintendent Eddie Johnson said. “They have faced tragedy after tragedy this year. I am asking all of you in Chicago, pray for the families of these two heroic young men.”

Those remains then moved to two awaiting ambulances and around 5 a.m. a procession for the officers made its way to the medical examiner’s office.

That procession went by the 5th District, where those officers were based and then lit up the Dan Ryan with blue lights.

“It just highlights how dangerous this job can be,” Johnson said.

Chicago police recovered a weapon from the scene and are questioning person of interest.

Counselors were on hand at the CPD's 5th District headquarters. The deaths of Marmolejo and Gary bring the total officer deaths in the district to five. Earlier this year, two officers in the 5th District committed suicide in separate incidents. A third officer died after collapsing on duty.

There have now been four Chicago police officers killed in the line of duty this year, and one firefighter.

Cmdr. Paul Bauer was killed outside the Thompson Center in February, and Officer Samuel Jimenez was killed in the Mercy Hospital shooting in November.

CFD diver Juan Bucio died after a rescue attempt in May.

The 100 Club says they will continue to be there for the first responders' families.