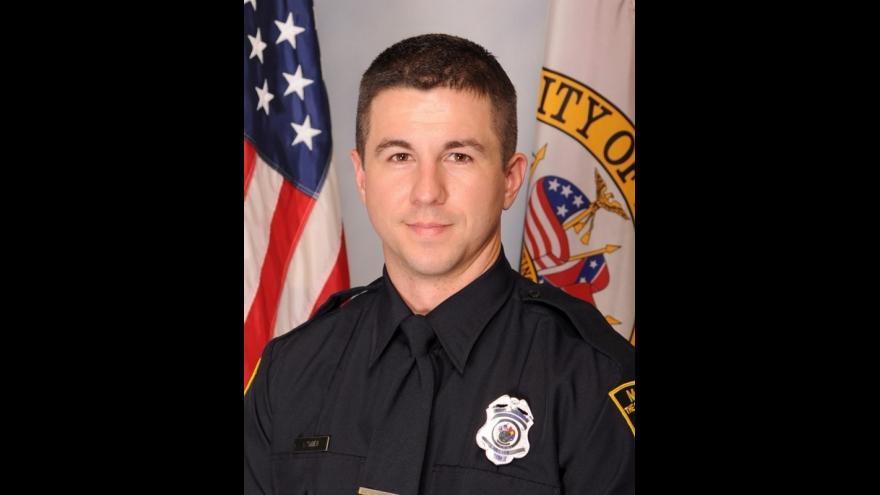 Sean Tuder, a Mobile, Alabama police officer, was shot and killed in the line of duty Sunday.

(CNN) -- An Alabama police officer has died after being shot Sunday, according to the Mobile Police Department.

Officer Sean Tuder, 30, was shot by a suspect with prior warrants while doing follow-up work on an investigation, Police Chief Lawrence Battiste told a news conference covered by CNN affiliate WKRG.

The suspect, Marco Perez, 19, was taken into custody, he said.

Perez made an initial court appearance Monday. Mobile County District Attorney Ashley Rich said Perez has been charged with capital murder. He is scheduled to be arraigned January 29.

Officer was 'a true leader'

Battiste told reporters that Tuder had been with the department less than five years.

"He was one of those guys that certainly resonates in your mind as somebody that's a true leader and had a true commitment to doing his best in this community to keep it safe and to be a role model for others," he said.

"He was really just getting into that part of his career where he started having an impact on not just the people in the community but the men and women who work here in this department."

Battiste asked for the community's prayers, saying: "Keep Officer Tuder's family in your prayers; his wife, his mom and dad, and his in-laws because this is going to be a difficult time."

The police chief also urged media to be patient as authorities investigated the shooting. "Right now we're just really trying to make sense of it and trying to hold each other up, and so please work with us," he said.

The Mobile Police Department website lists Tuder as Officer of the Month in July 2017.

It said Tuder had joined the Mobile Police Department in March 2016 and worked in a high-crime area in Precinct 1. Prior to that he had experience as a K-9 officer.

"Tuder is commended for his numerous drug arrests, with four cases being sent for federal prosecution, and recovering six firearms," a media release on his award said.

Tuder is the fifth US police officer to be gunned down in the line of duty so far in 2019.

Eight other officers have been killed on the job in 2019: -- four in firearms related deaths, three in traffic-related incidents and one who died in a medical emergency while he was in his patrol car, according to the National law Enforcement Officers Memorial Fund.

He and another officer had encountered two suspects when one of them pulled out a weapon and fired. The officers and one of the suspects were shot. A second suspect was taken into custody.

In Davis, California, a man on a bicycle shot Officer Natalie Corona, 22, on January 10 as she responded to a triple-car crash, police said.

A manhunt ended hours later, when police found the suspect dead with a self-inflicted gunshot wound.

Provo Master Police Officer Joseph Shinners, was shot and killed in Orem, Utah, on January 5, the Officer Down Memorial Page says. It says Shinners was with officers from the Provo and Orem police departments who were trying to arrest a fugitive, when the fugitive opened fire.

The officer died in the hospital that night from his injuries , it said.

In Shreveport, Louisiana, newly hired Officer Chatéri Payne was in uniform and getting ready for work when she was gunned down January 9, police said.

At the time police said it was not known what led to the killing.