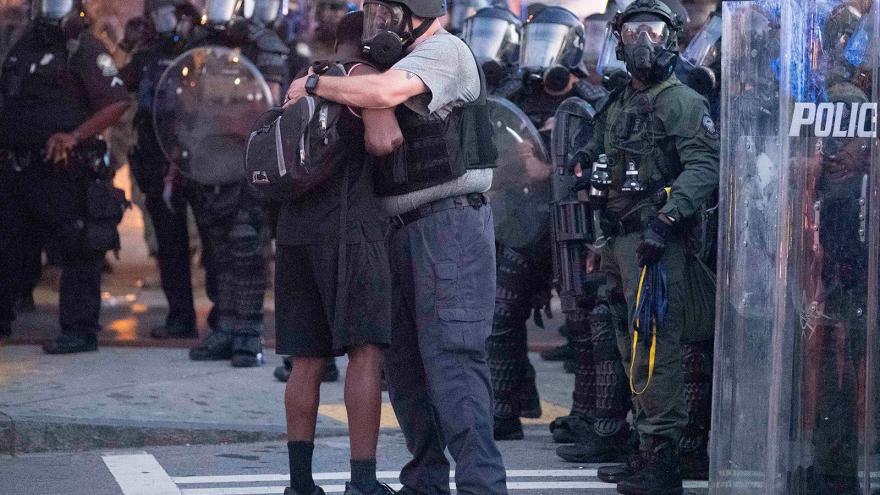 An officer clad in a helmet and mask hugs a protester.

(CNN) -- Americans have been protesting the death of George Floyd at the hands of Minneapolis police for days on end in dozens of cities throughout the United States.

While tensions between police and demonstrators have heated up in many places, some officers have shown solidarity with the movement by hugging protesters, praying with them, mourning with them, and taking a knee to honor Floyd.

In Atlanta, Georgia, a line of police officers holding shields during a protest Monday near Centennial Olympic park kneeled in front of demonstrators.

In another image, an officer wearing a gas mask, helmet and vest was seen embracing a demonstrator in a hug on the fourth day of protests in the southern city.

The Denver Chief of Police Paul Pazen joined in with demonstrators Monday, linking arms with attendees.

On Sunday, Pazen said dozens of his officers had been injured while responding to the protests but were eager to return and protect the rights of demonstrators.

In New York, Chief of Department of the New York City Police, Terence Monahan, embraced a demonstrator during a protest in his city Monday.

On the west coast, protestor Kevin Welbeck of Cre8 The Change shook hands with a California Highway Patrol officer during a protest in the Van Nuys area of Los Angeles.

At least two officers in Connecticut joined demonstrators as they marched through Bristol Monday.

Bristol Police Officer Nick Travisano was hugged by a protester as he joined a march with fellow officer Chris Bird.

In Minnesota, the state where Floyd was killed, an officer and a demonstrator shared an emotional embrace during a protest in St. Paul.