Suspect who claimed to have a bomb near US Capitol has surrendered, sources say 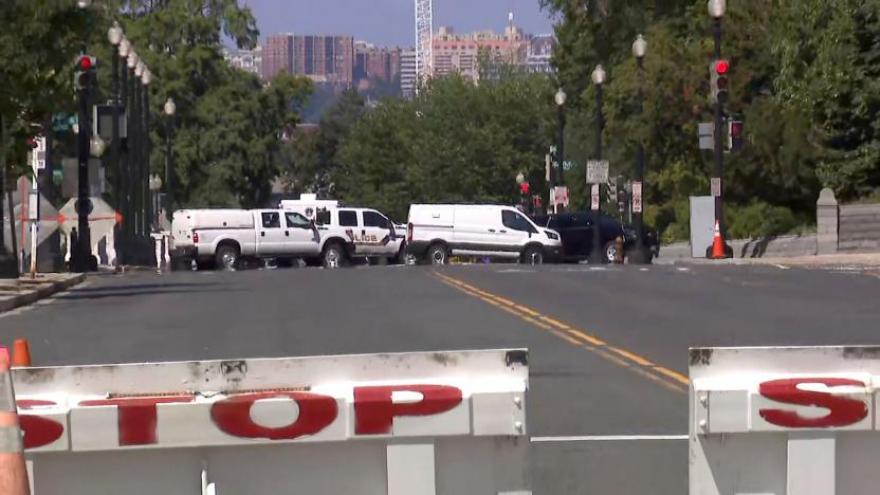 Police respond to the scene of a "suspicious vehicle" near the Library of Congress on August 19.

(CNN) -- A suspect who claimed to have an explosive device in a truck near the US Capitol has surrendered to authorities, two law enforcement sources tell CNN.

The incident prompted multiple buildings in the area to be evacuated Thursday as authorities responded to an "active bomb threat investigation," the US Capitol Police wrote on Twitter.

A man drove a black pickup truck onto the sidewalk in front of the Library of Congress at 9:15 a.m. ET, claiming he had a bomb and displayed what looked like a detonator to the officer on the scene, according to US Capitol Police Chief Tom Manger.

Negotiators were in communication with the suspect and were trying to come to a "resolution," Manger told reporters at a press conference near the Capitol.

Manger said the suspect had been live-streaming and that officials have a "possible name," but added "we don't have much information about him at this time."

"We don't know what his motives are at this time," he said.

Video has been posted on Facebook by the suspect, a law enforcement official told CNN. CNN is not yet naming the suspect. A video that lasts about a half hour shows an individual from inside a truck, holding a cannister that he says is a bomb and speaking about a "revolution."

The pickup truck the man drove to the scene does not have license plates, sources told CNN.

Two Library of Congress buildings -- the Jefferson and the Madison -- and the Cannon House Office Building are being evacuated due to a suspicious vehicle in the vicinity, according to alerts sent to staffers viewed by CNN.

The Supreme Court has also been evacuated on the recommendation of US Capitol Police, according to a spokesperson for the court, which is closed to the public because of Covid-19.

The FBI said in a statement that its Washington field office's National Capital Response Squad is responding to the incident. The Bureau of Alcohol, Tobacco, Firearms and Explosives is also responding, the agency said on Twitter.

The White House is monitoring the situation on Capitol Hill and is receiving updates from law enforcement, a senior administration official told CNN.