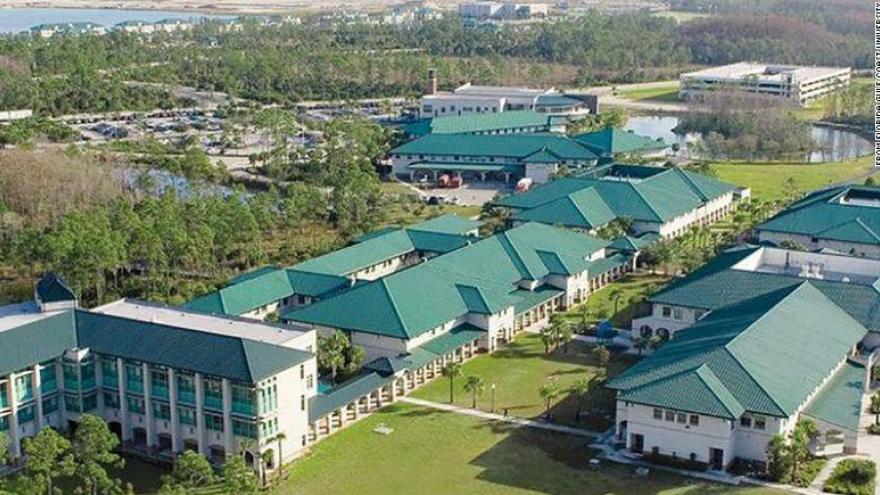 (CNN) -- A Florida university posted campus police outside a sociology class titled "White Racism" after the professor was flooded with harassing emails and messages -- some of them openly racist.

"All that it takes is that one person to act on their views," said Ted Thornhill, assistant professor of sociology at Florida Gulf Coast University, in a phone call with CNN. "We've got to be cautious because you don't know what people are capable of."

Tuesday was the first day of class, and there were no incidents reported. But Thornhill's course has been creating headlines, and controversy, since it was announced last fall.

A course description says the class will "interrogate the concept of race; examine the racist ideologies, laws, policies, and practices that have operated for hundreds of years to maintain white racial domination over those racialized as non-white." It also aims to "discuss ways to challenge white racism and white supremacy toward promoting an anti-racist society where whiteness is not tied to greater life chances."

The class filled quickly to the maximum of 50 students.

One, Bryan Oliva-Infante, told CNN he felt uncomfortable attending the class Tuesday because of the controversy. On his way to class he said he noticed extra university police officers nearby.

"Although I was a bit nervous, sitting through the class felt like a sigh of relief," said Oliva-Infante, president of FGCU College Democrats and FGCU for Dreamers.

"For the first time, ever, at FGCU, I was in an academic setting where the majority of people were students of color," he said. "It was beautiful to see that many of my classmates had cultural backgrounds similar to mine. One thing we all have in common was that our communities all suffer from white racism."

Thornhill, who is African American, said he decided to title the course "White Racism" because he believes it accurately signifies the material.

"I understood that many white Americans, and some people of color, would find it provocative," he told CNN.

The professor said he wasn't surprised when he was besieged with messages -- most of them negative -- and some hate mail in the days and weeks after the course was announced. Even so, he said he was shocked by their vitriol.

Thornhill shared with CNN 46 pages of emails he has received about the course. A few FGCU parents threatened to pull their tuition. Some writers asked why the course was called "White Racism" when racism exists among all ethnic groups. Others said Thornhill should devote class time to black racism.

Still others pelted him with insults and racial slurs.

"Cancer(Stage 4) is what you and your family deserve for spreading hate, lies, & in tolerance." read one email.

"I would ask that you stop using the name Ted and Thornhill, as I feel you are using a cultural appropriation. Change it to Obongo Deviantray you racist pig," said another.

A third said, "I BET MEMBERSHIP IN THE KLAN IS PROBABLY SKYROCKETING BECAUSE OF RADICALS LIKE YOU."

Others called him "a pitiful little boy," "a subhuman mongrel" and an "alt-left piece of sh*t."

Asked about the outcry, Thornhill told CNN, "It is not my job to provide white people with comfort."

He later said, "I never at any point entertained the possibility of changing the course title to accommodate the racial bigotry of the individuals who would send me these kinds of messages."

Thornhill's experience is not unusual. Last year more than 100 incidents of harassment targeting professors were reported on college campuses around the country, according to the American Association of University Professors.

And like at FGCU, safety concerns have been raised as a result of controversial subject matter taught in classrooms.

This also is not the first time a course called "White Racism" has caused an uproar. In 1995 Noel Cazenave, a sociology professor at the University of Connecticut, began teaching a class with the same name and subject matter. It too, was controversial.

The outcry over the course was so intense, Cazenave told CNN, that the school tabled it twice amid widespread publicity.

"It went global," he said. When it was announced that the class would finally be taught, Cazenave described seeing the press outside his window, lining up "like I discovered the cure to cancer."

At FGCU, Thornhill's class will meet again on Thursday. The university did not say whether police will be stationed outside.

"Our University Police Department will determine going forward if there's anything new that would warrant attention beyond their normal campus rounds," FGCU spokeswoman Susan Evans said in an email to CNN.

For his part, Thornhill says his course is about a search for truth.

"My White Racism course is not anti-white; it is anti-white racism," he said in a written statement sent to CNN and other news outlets. "Clearly, not all white people are racists; some are even anti-racist. However, all people racialized as white derive, in some measure, material and psychological benefits by virtue of being racialized as white."