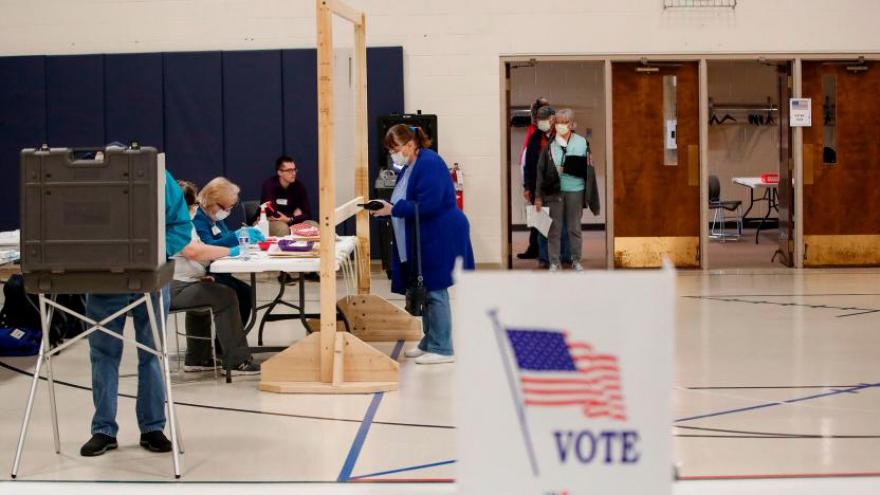 A woman checks in to cast her ballot during a Democratic presidential primary election at the Kenosha Bible Church gym in Kenosha, Wisconsin, on April 7.

(CNN) -- As more early voting sites open across the country, election officials have faced a significant challenge: Staffing those sites with poll workers. And amid the coronavirus pandemic, the stakes are higher than ever.

During the 2016 election, nearly 1 million poll workers staffed voting locations across the country, according to the US Election Assistance Commission. And even before the pandemic, 65% of jurisdictions reported it was "somewhat difficult" or "very difficult" to attract enough poll workers. They also found more populous jurisdictions had a harder time recruiting.

Now, the public health threat from the pandemic combined with projected record turnout and CDC guidance to keep as many polling places open as possible has created a perfect storm -- and headache -- for election officials.

A surge in sign-ups

With recruitment deadlines approaching, election officials are reporting that many people have answered the call. Across the country, they have reported a surge in poll worker sign-ups, assuaging some of the concerns building over the summer amid the pandemic.

On Friday, Power the Polls reported 500,000 sign-ups since the group began recruiting in June -- all people who want to serve as poll workers. The nonpartisan newly formed group's website helps users navigate at times complicated state and local election websites to connect them with election officials.

"We're going to keep charging right up until the election officials tell us they won't be taking any more people," Power the Polls' co-director Scott Duncombe told CNN.

ELECTION 2020: Send us your stories about voting issues

It's more than double the group's goal, surpassed through a combination of digital advertising on platforms like Snap and Instagram, corporate partners like Old Navy and Target encouraging their employees, plus nonprofit groups across the political spectrum recruiting their members.

"I never want to say we're going to stop recruiting, because we won't," said David Garreis, president of the Maryland Association of Election Officials and deputy elections director of Anne Arundel County, Maryland. He sounded the alarm about Maryland's need for poll workers this August -- saying the state needed nearly 14,000 more election workers in order to open every polling location on Election Day.

Now, recruitment has picked up -- and the state consolidated voting locations, reducing the number of staff needed but keeping the same number of machines used to cast ballots.

"I don't want to put it out in the press that we're good because I don't want people to not sign up," Garreis said. "But a lot of the pressure is off right now."

'I didn't have an excuse not to'

In Anne Arundel County alone, all 1,600 poll worker slots are filled, along with the 800 extra applications on hand, according to Garreis.

Tammy Russel is one of those new sign-ups. She considered becoming a poll worker in the past. But this year, she admitted she didn't have a reason not to sign up. "In a way, part of it was I didn't have an excuse not to, to be honest," Russell said.

She's one of the thousands of new poll workers to sign up for the first time this summer.

In North Carolina, officials estimated they would need 25,000 to 30,000 poll workers. Over the last two months, they've received 33,000 submissions to become a poll worker.

"We were a lot more worried at the beginning than we are now," said Noah Grant, elections communications specialist with the North Carolina Board of Elections. "And there is still a need, in several counties, but it's definitely not as dire as we thought it was a few months ago."

Yet Charlotte's Mecklenburg County, North Carolina's most populous, needs 2,800 poll workers according to data compiled by the state and shared with CNN. No other North Carolina county reported needing more than 800 poll workers. The others with big outstanding gaps include Durham, Cumberland, Buncombe and Henderson.

In Ohio, officials are touting the 44,000 who have signed up to be poll workers -- already above the minimum of 37,507 needed by the state. But that's not without some hiccups.

Officials in Cuyahoga County mistakenly sent an email to as many as 1,000 potential poll workers saying no positions were currently available.

"I hate that that email went out," Cuyahoga County Board of Elections Director Anthony Perlatti told the Cleveland Plain Dealer and Cleveland.com on Wednesday. "It shouldn't have gone out." He urged potential poll workers to disregard the email.

The Plain Dealer first reported the mistake. Perlatti did not return a request for comment.

But the county still needs another 3,678 workers, according to the state's database, which is the biggest deficit in the state.

Staffing at a higher rate

Wary of last-minute cancellations from committed poll workers, election officials are recruiting even more people to work the polls than in previous years.

In Ohio, LaRose set a 150% staffing goal for each county -- and is publicly releasing each county's recruitment efforts in a database online called the Poll Worker Tracker.

"If we can see which county is struggling to reach the 150% goal that I have set for them, then we can get the resources to them," LaRose said.

Even with Election Day approaching, officials aren't letting up.

"Especially in counties that don't have as many reserves, it's getting late in the game to recruit but that's why we're still doing this," Grant said of North Carolina's outreach efforts. "There could be an outbreak in a city and we could lose a lot of workers. That's just hypothetical but with this election you kind of have to prepare for anything, especially with this year. We're just making sure we have enough."

In Milwaukee, Woodall-Vogg is staffing 20% over the non-pandemic election goal of 2,400 election workers, all to ensure all 173 election sites are open without lines for voters on Election Day.

Finding poll workers is only the first step. Especially with an influx of new workers, training is crucial -- and it needs to be done sooner rather than later.

"By the end of this month, we need to have this pretty well finalized so we can get these folks trained and ready to report for duty on Tuesday, November 3," LaRose said.

In April, Milwaukee experienced a worst-case scenario. The state was forced to proceed with its primary election in the early weeks of the pandemic. So few poll workers showed up for the April primary that the city could only open five polling locations. Those who did vote faced lines as long as 2.5 hours.

"As hard as it is to stomach, Milwaukee was kind of the poster child for what that looks like," said Milwaukee Election Commission Executive Director Claire Woodall-Vogg.

"I think the only good thing to come out of our April 7 election where we had only 5 polling places, was it really gave community members a visual of what poll worker needs were," Woodall-Vogg said. "And what happens when you don't have enough poll workers."

Now, Woodall-Vogg's office is working to stay in touch with those who have volunteered and gone through training through weekly newsletters with extra information and updates. The office is "connecting and keeping them on our radar, so they're more likely to show up," she said.

Poll workers are traditionally older retirees -- exactly the group more at risk amid the pandemic. Officials and adovcacy groups have specifically targeted younger people who might feel more comfortable and be at lower risk to step up.

20-year-old Kennedy Mattes plans to work at her local polling location in Cincinnati this fall for the first time. She's also the co-founder of Poll Hero Project, which has worked to recruit high school and college students to work the polls. The group says it has reached more than 20,600 people since July.

"We are in a unique moment where the older generation is counting on young people to step up," Mattes said. "By becoming a poll worker, you're aiding in the effort to prevent the closure of polling locations, so that you're giving more people the ability to vote so we can have a government that's more representative of the people of the country."

There's also the potential that this becomes a lifetime habit for a new generation of poll workers.

"Hopefully with this next generation, it's going to become a civic tradition," said Power the Polls' co-director Scott Duncombe said. "We're really excited to see what happens after the emergency is over."

Officials credit the efforts of National Poll Worker Recruitment Day, on September 1, as well as businesses and state governments incentivizing employees to sign up to work the polls.

"We're in a lot better place where we were, for sure," said US Election Assistance Commission Chairman Ben Hovland. "That being said, there are still needs around the country."

Officials do worry about an October surprise from the pandemic, with the threat of new outbreaks upending elections plans.

"One of the big concerns on all of the election officials minds around the country is we don't know what October is going to hold and if there's going to be a resurgence of Covid or anything like that, which would cause people to start dropping out en masse again," Garreis said. "But we're cautiously optimistic."

Garreis said Anne Arundel County is seeing about 50 applicants drop out a week, but officials still have enough applications on file that they can make up the difference.

For those who have reached out about becoming an election official but haven't heard back, sit tight.

"Officials are slammed this time of year," Hovland said. "If people are willing to serve, they can sign up and they've done their part, and if they're needed, their election official will get in contact with them."