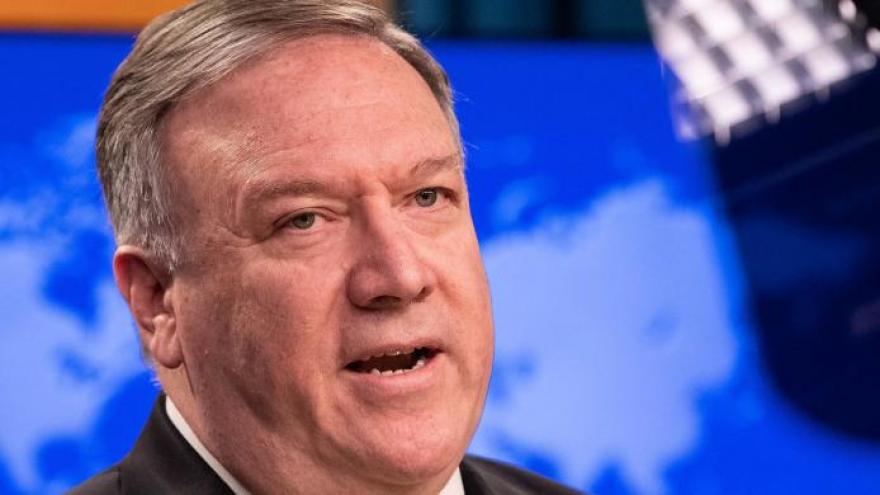 Mike Pompeo again denied that he recommended the removal of the State Department inspector general in retaliation for an investigation into the potential misuse of government resources by the top US diplomat and his wife.

(CNN) -- Secretary of State Mike Pompeo again denied that he recommended the removal of the State Department inspector general in retaliation for an investigation into the potential misuse of government resources by the top US diplomat and his wife.

Pompeo also offered to have one of his top officials testify on the circumstances of the ouster of Steve Linick, the inspector general.

In a series of letters dated Thursday to the top Democrat on the House Foreign Affairs Committee, the secretary of state and his deputy, Stephen Biegun, both said that Pompeo had no knowledge of the probe at the time he made the recommendation to the President. Pompeo called it "a nasty insinuation" by the chairman, New York Democratic Rep. Eliot Engel.

He also offered to allow State Department Undersecretary for Management Brian Bulatao to "voluntarily testify at a public hearing before the full House Committee on Foreign Affairs" on June 22 or 23.

On Friday, Engel accepted the offer for Bulatao to appear but noted "that such an appearance in no way negates the requests by this Committee, along with the Committee on Oversight and Reform and the Senate Foreign Relations Committee, to hear from a number of other Department officials. Those requests remain in effect, and we expect them to be honored."

The letters obtained by CNN were sent a day after a transcript from the ousted inspector general's interview with lawmakers revealed that he was given no reason for his ouster and that he was looking into five matters related to the State Department at the time he was fired. The work on those matters has not been shut down by the new inspector general, according to a source familiar with them.

Linick testified that he told Bulatao and Biegun about the review into Mike and Susan Pompeo's potential misuse of government resources.

"I wanted to make sure everybody was aware so that they wouldn't be surprised," Linick said, noting that he "didn't tell them not to tell anybody, including Secretary Pompeo, about them."

However, according to the letter from Biegun to Engel, none of the officials told Pompeo about the probe.

"We can confirm unequivocally that, to the extent that any of us were made aware of any 'investigation' of this nature, none of us briefed Secretary Pompeo on, or otherwise discussed with him, this purported 'investigation' at any time before the President removed Mr. Linick from his position," Biegun said. "Indeed, I have maintained a 'firewall' related to any Inspector General discussions to preclude -- to the maximum extent practicable -- the Secretary of State's involvement in any specific investigations."

Pompeo has maintained he was unaware of this particular investigation, saying in one of the letters that none of the officials "ever discussed with me any such 'investigation' before the President removed the Inspector General from his position."

"Because I had no knowledge of this alleged work by the Inspector General at the time I recommended to the President that Mr. Linick be removed, it is not possible that Mr. Linick's work on this matter could have provided a retaliatory motivation for my recommendation," he said.

Pompeo again insisted he made the recommendation to fire Linick because the inspector general failed "to properly perform his duties over a series of many months."

In his testimony to lawmakers and staff, Linick said that he has been given no reason for his ouster and disputed the reasons that Pompeo had publicly cited for his loss of confidence. Those included a failure to promote the State Department's mission statement and disapproval of the way Linick handled a probe into a potential leak to the press about an inspector general report into potential retaliation by political appointees.

In one of the letters to Engel, Pompeo again referenced Linick's "strange and erratic behavior" with regard to the probe, which found no evidence of the leak.

However, in his testimony, Linick explained his moves on that investigation, saying he initially tried to refer the investigation to the agency State recommended, but was told it was not in their purview. He instead referred it to the Pentagon inspector general. Linick said he did not turn the report over to the State Department for fear of retaliation against his investigators.

Pompeo and Biegun's letters were accompanied by a document entitled "Three Things Democrats Won't Tell You About Linick's Testimony," which contained selective quotes from the transcript and refutations aimed at showing "Linick's poor judgement, inconsistent, and inappropriate behavior," that he "repeatedly broke IG rules and precedents," and that "State Department Leadership Acted 100% Appropriately."