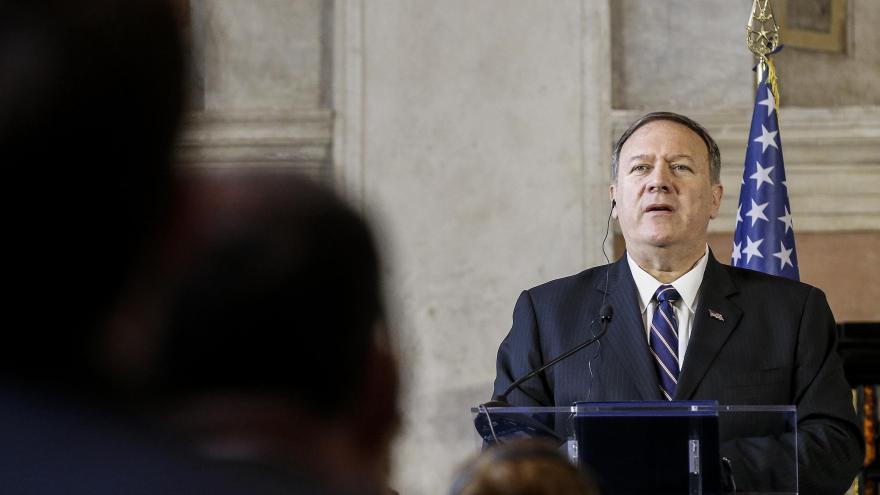 (CNN) -- Secretary of State Mike Pompeo on Friday failed to meet a subpoena deadline from the House to produce Ukraine-related documents.

A House Foreign Affairs Committee aide told CNN that "Secretary Pompeo has failed to meet the deadline to produce documents required by the subpoena. However, the State Department has contacted the Committees on this matter and we hope the Department will cooperate in full promptly. Apart from the outstanding subpoena, we look forward to hearing from Ambassadors Sondland and Yovanovitch next week."

CNN has reached out to the State Department for comment.

On Saturday, Pompeo told reporters that the US State Department had sent a letter to Congress Friday night with its "initial response" to the document request.

"We'll obviously do all the things we are required to do by law," Pompeo said, during a press conference in Athens, without elaborating on what the department's response said.

The lapse comes after the chairmen of three House committees subpoenaed Pompeo last week over his failure to produce documents related to Ukraine, and following his admission on Wednesday that he had been on the controversial July call when Trump pressured Ukrainian President Volodymyr Zelensky to investigate former Vice President Joe Biden -- Trump's potential Democratic rival -- and Biden's son Hunter. There is no evidence of wrongdoing in Ukraine by Joe or Hunter Biden.

House Foreign Affairs Chairman Eliot Engel of New York said Friday that despite no indication that the State Department would meet the deadline, the committee is "hopeful that we will get things that we need."

"Maybe not in the next two hours, but we're hoping we're going to get some answers," Engel told CNN's Chris Cuomo just before the deadline.

The battle between Pompeo and House Democrats has been raging for several weeks. The Democratic chairmen of the House Foreign Affairs, Intelligence and Oversight committees wrote to Pompeo on September 9 with a request for six categories of documents by September 16 "related to reported efforts by President Trump and his associates to improperly pressure the Ukrainian government to assist the President's bid for reelection."

After another letter later in the month demanding action or "our Committees will have no choice but to move towards compulsory process this week," Reps. Adam Schiff of California, Engel and Elijah Cummings of Maryland issued a subpoena request.

"Pursuant to the House of Representatives' impeachment inquiry, we are hereby transmitting a subpoena that compels you to produce the documents set forth in the accompanying schedule by October 4, 2019," they wrote in a letter to Pompeo last week.

In addition to the subpoena, the chairmen informed Pompeo in a separate letter that they had scheduled depositions for five State Department officials who have been mentioned in relation to the inquiry.

Pompeo said on Tuesday that the proposed timetable for witnesses to testify in the coming days was too compressed, accusing lawmakers of "intimidating and bullying" State Department officials by calling them for depositions related to the Ukraine inquiry. House Democrats in turn issued a stark warning to Pompeo that any effort to prevent those officials from speaking to Congress "is illegal and will constitute evidence of obstruction of the impeachment inquiry."

Pompeo's admission that he had been present on the call between Trump and Zelensky that prompted much of the inquiry adds a new layer to a controversy.

"I was on the phone call," Pompeo said Wednesday during a news conference in Rome with Italy's foreign minister, hours before the State Department inspector general's "urgent" private briefing with senior congressional staff members about documents related to the Ukraine scandal.