Pompeo says Hong Kong is no longer autonomous from China 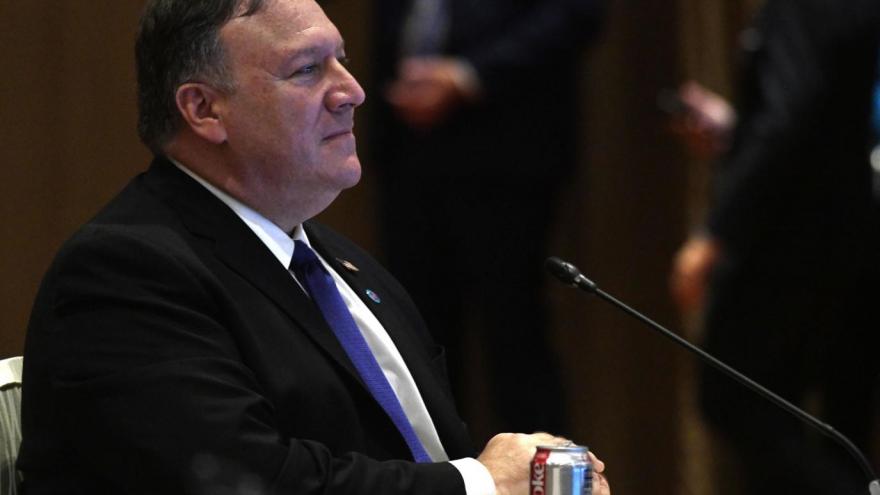 Secretary of State Mike Pompeo said he certified to Congress Wednesday that Hong Kong no longer enjoys a high degree of autonomy from China -- a decision that could result in the loss of Hong Kong's special trading status with the US and threaten the autonomous region's standing as an international financial hub.

(CNN) -- Secretary of State Mike Pompeo said he certified to Congress Wednesday that Hong Kong no longer enjoys a high degree of autonomy from China — a decision that could result in the loss of Hong Kong's special trading status with the US and threaten its standing as an international financial hub.

President Donald Trump and Congress will decide what actions to take as a result of the certification which comes at a time of increased tensions with Beijing as the two countries trade barbs over the coronavirus pandemic. Ending a special trading relationship that has existed for decades would carry costs for American business, rattle an already fragile global economy and hurt Hong Kong more than China, experts warn.

"The State Department is required by the Hong Kong Policy Act to assess the autonomy of the territory from China. After careful study of developments over the reporting period, I certified to Congress today that Hong Kong does not continue to warrant treatment under United States laws in the same manner as U.S. laws were applied to Hong Kong before July 1997," he said in a statement. "No reasonable person can assert today that Hong Kong maintains a high degree of autonomy from China, given facts on the ground."

Under the "One Country, Two Systems" policy, Hong Kong retains limited democracy and civil liberties despite being under Beijing's control.

Last year, Congress passed and Trump signed into law the Hong Kong Human Rights and Democracy Act in support of the region's pro-democracy protesters. Under that law, the US must annually verify to Congress that Hong Kong remains autonomous from China, or it risks losing its special status.

Pompeo's decision comes after Beijing introduced controversial national security legislation for Hong Kong -- legislation that he again denounced in Wednesday's statement as a "disastrous decision." Last week, the top US diplomat warned that the passage of the legislation would be a "death knell" for Hong Kong's autonomy.

The proposed law has prompted protests in Hong Kong and has been denounced internationally, with observers warning it could curtail many of the fundamental political freedoms and civil liberties guaranteed in the agreement handing the city over from British to Chinese rule in 1997.

A congressional aide told CNN that the certification does not automatically trigger action and the President will determine the next steps.

Trump is expected to take executive action on what will happen in regard to Hong Kong's status with the US as soon as Friday, two sources familiar with the administration's thinking and two Republican congressional aides told CNN. But the sources say discussions are still ongoing as to how far the executive action will go, and to anticipate that further action will be taken in addition to what is expected to be rolled out Friday.

David Stilwell, the top US diplomat in the Bureau of East Asian and Pacific Affairs, would not go into specifics about what action the US might take, but said they were looking at options "across the spectrum."

He told reporters Wednesday that there could be visa or economic sanctions, but noted that he did not want to get ahead of the White House. He would not address timing. Stilwell said the actions would reflect a "whole of government approach" and would be "as targeted as possible to change behavior."

The administration is likely to announce a review process to determine exactly how they'll act on Pompeo's decision, said Kurt Tong, a former US consul general to Hong Kong who left that post in July 2019.

"The administration's primary objective is to show decisiveness," said Tong, now a partner at The Asia Group, a business consultancy. But the former consul general said taking action that undermines Hong Kong's status as an economic hub could be double edged.

"There's a moral justification for what the administration might do on Hong Kong, when you think about people in Hong Kong risking their lives for their personal freedoms," Tong said. "There's another way to look at it more strategically: Is it going to help the US? Will it hurt Hong Kong-ers and their pocketbooks? And that's where the strategy of disrupting the US-Hong Kong relationship starts to look less powerful."

"Ultimately if Hong Kong becomes less operative as a place to do business, it could also hurt China somewhat," which benefits from Hong Kong's role as a hard currency finance center, Tong said. "but it's indirect and it's mutual: Anytime you destroy an aspect of the US-China business relationship, both sides lose."

Bonnie Glaser, the director of the China Power Project at the Center for Strategic and International Studies, noted that it "could have further effects such as making it more difficult for Hong Kongers to travel to the United States because they will have to get visas through a different process that is similar to what applies to the mainland." She said it could also bring an end to the US-Hong Kong Extradition Treaty, which could cause criminals "to see Hong Kong as a safe haven, a place where they can continue to function, and not be living in fear that they would be extradited to the United States."

"That's worrisome for for Hong Kong's reputation as being transparent and open and lacking corruption and criminality when it comes to financial interactions," she said.

Robert Manning, a senior fellow with the Scowcroft Center for Strategy and Security and its Strategic Foresight Initiative at the Atlantic Council, said it is a question of how severe the response is. He described the "nuclear option" as "taking completely away Hong Kong's differentiated status and applying all the same China policy to Hong Kong which would end up, I think, hurting he people in Hong Kong we're trying to help as well as be a huge disruption of business and finance."

Potential 'exodus' of US companies

The loss of Hong Kong's special trading status would have significant financial implications. The US Consulate General in Hong Kong says it represents more than 1,200 US companies doing business there -- more than 800 are either regional offices or headquarters. Hong Kong was the US' 21st largest goods trading partner in 2018, according to the Office of the US Trade Representative. According to the US Census Bureau, the US exported $6.36 billion in goods and imported $952 million in goods from Hong Kong in the first quarter of 2020.

Stilwell said that "the State Department writ large is talking to American businesses and others, but we also know that they are -- everyone's reading the writing on the wall."

Bill Reinsch, the Scholl Chair in International Business at CSIS, predicted that a loss of status would result in "an exodus, and not just American companies going elsewhere."

"It's bad news for Hong Kong as a financial center. Money goes where it's safe," he told CNN. "It will also be a signal for banks to be very, very careful about Hong Kong."

"Watch and see what London does, wamtch and see what Tokyo does. It's going to change and the victims will be the people of Hong Kong -- Xi Jinping doesn't suffer at all," he said referring to China's leader.

Stephen Orlins, president of the nonprofit National Committee on United States-China Relations, said ending the special status would be "catastrophic."

"If we end Hong Kong's separate status we hurt the people of Hong Kong more than it hurts the people of mainland China. It will devastate them. So the people who you try to protect, you are shooting," he told CNN.

Pompeo said the decision on Hong Kong's autonomy "gives (him) no pleasure," noting that "Hong Kong and its dynamic, enterprising, and free people have flourished for decades as a bastion of liberty."

"But sound policy making requires a recognition of reality," he said. "While the United States once hoped that free and prosperous Hong Kong would provide a model for authoritarian China, it is now clear that China is modeling Hong Kong after itself."

Rep. Michael McCaul, the Texas Republican who chairs the China Task Force, said the decision was "regrettable, but the Chinese Communist Party left us no choice."

Sen. Lindsey Graham, a South Carolina Republican and close ally of the President, called on the Senate to "act on bipartisan legislation sanctioning China for the destruction of Hong Kong's democracy and freedom."

Chairman of the House Foreign Affairs Committee Eliot Engel, a New York Democrat, said in a statement that "the U.S. response to the Chinese government's actions must be decisive, clear, and taken to protect U.S. national interests and to support autonomy and democratic freedoms in Hong Kong provided under international law."

"U.S. policy toward Hong Kong should not be a pawn in whatever games Secretary Pompeo or President Trump is playing with Beijing," he said.

Orlins said that the administration's certification on Hong Kong fits in with the larger strategy of blaming China.

"The Trump campaign had decided to deflect action from its bungling of the coronavirus pandemic to blaming China. So a finding that the mainland government violated the 'One Country, Two Systems' model and therefore Hong Kong is not to benefit anymore from the separate tariff entity system would be perceived as bashing China and would fit into his reelection plan, but it is so terrible to the people of Hong Kong," he told CNN.

Under the 1997 handover agreement between the UK and China, Hong Kong's Basic Law was meant to ensure the territory's high degree of autonomy, with an independent executive, legislative and judicial system and control over its financial system, human rights and freedoms. Beijing also promised that Hong Kong citizens could elect their own local government by 2017. But in the last two decades, China has taken steady steps to infringe on Hong Kong's autonomy, culminating in the new proposed security law that bypasses the territory's legislature.

Pompeo said in past weeks that he had delayed the required report to Congress on Hong Kong autonomy because the State Department was "closely watching what's going on there." He noted last week that "pro-democracy legislators were man-handled while trying to stop a procedural irregularity by pro-Beijing legislators. Leading Hong Kong activists like Martin Lee and Jimmy Lai were hauled into court."

China has tried to enforce legal and psychological obedience in Hong Kong, pushing from 2012 for education to instill "patriotism" in Hong Kong's children. In 2019, a proposed law allowing criminals to be extradited to China brought thousands of protestors into Hong Kong's streets, afraid that the territory's special status was being steadily corroded.