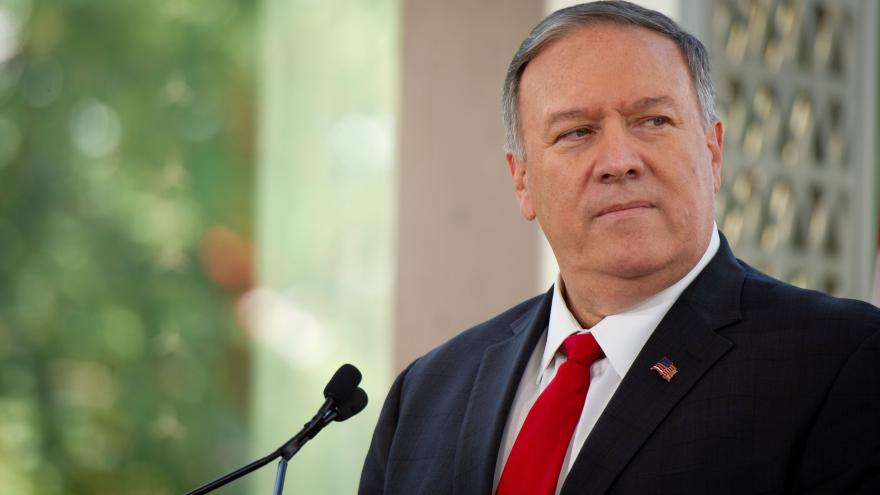 (CNN) -- Secretary of State Mike Pompeo issued four tweets on Christmas Eve. Two of them — from his official government handle — focused on Iran and thanked members of the US military.

The others came from a new personal account and struck a vastly different tone. In one, he's playing cards while drinking a bottle of Sam Adams. In another, he's smiling in front of a Christmas tree.

Amid growing speculation that Pompeo may depart his post as America's top diplomat to run for the US Senate from Kansas, the new social media accounts are raising eyebrows inside the Trump administration and among Republican operatives. The casual, family-centric Twitter and a similarly personable Instagram make for a stark contrast with the stately persona Pompeo has cultivated as President Donald Trump's top envoy.

The new accounts, which began posting in mid-December, are viewed by some inside the White House and State Department as platforms for Pompeo to begin building a personal brand ahead of a potential run, even as it remains unclear when and even if he will decide to depart the administration.

While some of Trump's advisers view it as a foregone conclusion that he will enter the Kansas US Senate contest, others are less sure he'll decide to reenter electoral politics (Pompeo served in the House of Representatives for six years).

Trump, who has said Pompeo would run if there were a risk of Republicans losing the Kansas seat, has received briefings from Senate Majority Leader Mitch McConnell on Pompeo's polling strength in the state, people familiar with the matter said.

And inside the White House, names of potential secretary of state replacements have been bandied about as advisers wait to learn Pompeo's decision.

Publicly, Pompeo has downplayed and even dismissed the idea that he is considering a run, despite taking regular trips to Kansas and sitting for interviews with Kansas media outlets.

But the new social media accounts aren't helping to quiet the speculation. In his new online image, Pompeo is a homegrown, all-American family man -- with almost no mention of his role in Washington. In addition to the photos of card games at his kitchen table and drinking beer, Pompeo is seen washing dishes in a pair of gym shorts and attending college football games.

Pompeo introduces his followers to his wife, Susan, his son, Nick, and his Labrador retriever, Sherman. On Christmas Day, Pompeo -- who has largely cast himself a no-nonsense secretary of state -- even tweeted a goofy GIF of the movie "Elf."

"Merry Christmas!" he wrote, followed by emoji of a Christmas tree, a wrapped present and a cross.

State Department officials who have worked with Pompeo chuckled at the images, observing that they seemed to portray him as a "man of the people."

The new Twitter account -- which accrued more than 17,000 followers in less than two weeks -- caught the attention of White House officials, some of whom expect Pompeo to depart his post in the near future.

But Pompeo, who has remained in lockstep with Trump throughout his time in the administration, didn't go rogue in launching the new account on the President's favorite messaging platform. Before creating the new handle, the State Department held discussions with the White House about the legalities of setting up a personal account.

"There were discussions about the rules relating to official vs. personal accounts, and under what mechanisms senior officials could keep their accounts and followers," an administration official said.

The State Department did not reply to a request for comment on these discussions, nor on why Pompeo felt the need to launch a personal Twitter at this particular juncture. The White House also did not respond.

If Pompeo does decide to run, he will need to leave behind his official secretary of state Twitter handle, but he can maintain his new account.

Pompeo's prospective run may have no bigger supporter than the man who oversees the Senate Republican conference: McConnell. The Kentucky Republican has been effusive in his praise for the former House member and unabashed about his desire to see Pompeo as the next senator from Kansas.

Repeatedly, McConnell has said publicly that he wants Pompeo to run. He invited Pompeo to speak at his alma mater, the University of Louisville, as part of a speaker's series at the endowed institution that bears his name: the McConnell Center.

Ahead of that appearance, Pompeo had denied reports that he was preparing to make a run, declaring them "completely false" in an interview on Fox News.

Privately, McConnell has been forceful in expressing that desire, sources say, noting that the Senate would serve as an ideal place to continue the secretary of state's service, expand his profile and broaden his portfolio as he considers his next political move.

Those conversations haven't been only with Pompeo. They've also occurred inside the Oval Office. In a fall meeting at the White House to discuss the political landscape, McConnell showed Trump the numbers from what he and his team were seeing in Kansas -- numbers, sources said, that underscored GOP concern about the state of the primary there.

Kansas hasn't had a Democratic senator since 1932, but Sen. Pat Roberts' looming retirement has become a cause for concern within the GOP establishment.

Their worry is that the party will nominate Kris Kobach, an anti-illegal-immigration firebrand and voter-fraud crusader who lost the governor's race last year to a Democrat. Kobach then turned around and announced his candidacy for Senate in July.

Democrats also made gains in the Kansas 2018 congressional races. The GOP worry is that a Senate race with Kobach could become a repeat of the governor's race, paving the path for a Democratic victory. Roberts himself has wondered publicly if Kansas is shifting politically, telling CNN he didn't know if Kansas was "deep red anymore" and was now "maybe purple."

While no specific ask was made in McConnell's conversation with Trump, it was made clear that unlike those already in the race, Pompeo would have a much clearer path to victory in his home state.

Upon seeing the numbers, Trump previewed the response he would give publicly on Fox News a short time later: If a Pompeo run was necessary to assure that Republicans would hold on to the seat, he'd not only be supportive of the idea, but also would make clear to Pompeo that a run was necessary.

"If he thought that there was a chance of losing that seat, I think he would do that and he would win in a landslide because they love him in Kansas," Trump said in an interview on "Fox & Friends." "Mike would win easily in Kansas. Great state. And it's a Trump state. He'd win easily."

Planning for an exit

With the polling figures and softened social media persona as the backdrop, the White House is working on developing a list of potential Pompeo replacements, a source familiar with the discussions said.

Treasury Secretary Steven Mnuchin, national security adviser Robert O'Brien and Deputy Secretary of State Stephen Biegun are all being discussed as part of the list, the source said, but cautioned the effort is a work in progress and could change at any time.

The Washington Post first reported on some of the efforts to develop replacement options for Pompeo.

Mnuchin is said to want the job, though he is not aggressively campaigning for it, the source said. Mnuchin, however, is close with Qatar, which is viewed as a negative in the eyes of Jared Kushner, Trump's son-in-law and senior adviser, who is close with the Saudis, a regional rival.

Terry Branstad, the current US ambassador to China and former governor of Iowa, has also been suggested to Trump as a potential Pompeo replacement, another source familiar with the discussions said. The President views Branstad as a interesting pick, given his role in China and his connection to Iowa, but it is unclear if Trump is seriously considering him as the nation's top diplomat.

The sources said the discussions were still preliminary, and indicated there is no definite list of potential heirs apparent. Trump is known to change his mind on a whim, and can be swayed by those he is close with outside the White House. It wasn't clear if other names were also being thrown his way.

Unless directed otherwise, Biegun would take over as acting secretary of state if Pompeo were to depart. Well-liked within the administration and on Capitol Hill, he could remain in the acting role for a while as a permanent replacement is sought, two sources said. Trump has made known his preference for "acting" Cabinet members.