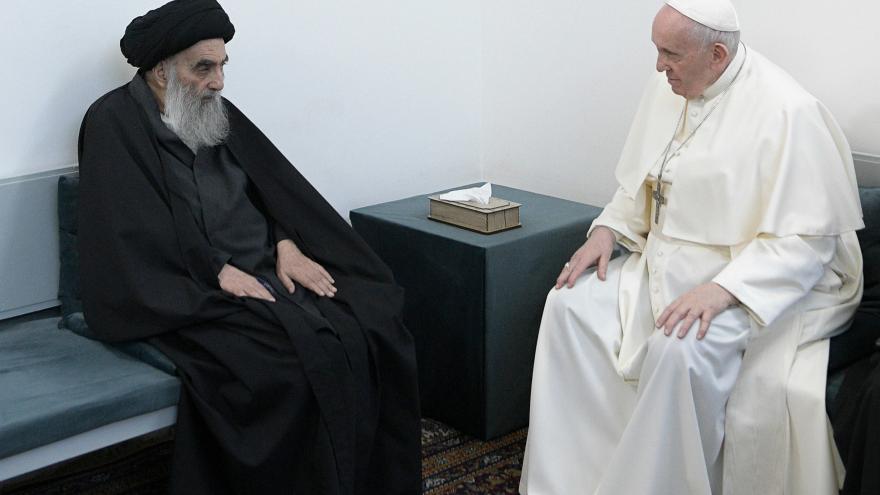 (CNN) -- Visiting Ur, the ancient Iraqi city where Jews, Christians and Muslims believe their common patriarch Abraham was born, Pope Francis denounced extremism as a "betrayal of religion."

The Pope visited Ur on Saturday, the second day of the first ever papal visit to Iraq. Addressing a meeting of inter-faith leaders, Francis condemned the violence that has plagued Iraq in recent years and called for friendship and cooperation between religions.

"All its ethnic and religious communities have suffered. In particular, I would like to mention the Yazidi community, which has mourned the deaths of many men and witnessed thousands of women, girls and children kidnapped, sold as slaves, subjected to physical violence and forced conversions," he said.

Francis also praised the recovery efforts in Northern Iraq, where ISIS terrorist destroyed historical sites, churches, monasteries and other places of worship. "I think of the young Muslim volunteers of Mosul, who helped to repair churches and monasteries, building fraternal friendships on the rubble of hatred, and those Christians and Muslims who today are restoring mosques and churches together," he said.

The speech calling for cooperation between religions came just hours after the Pope held a historic meeting with revered Shia Muslim cleric Grand Ayatollah Ali al-Sistani in the holy city of Najaf. The 45-minute papal meeting with the 90-year old al-Sistani -- who rarely appears in public -- represented one of the most significant summits between a pope and a leading Shia Muslim figure in recent years.

During the meeting, broadcast on al-Iraqiya state TV, al-Sistani thanked Francis for making an effort to travel to Najaf and told him that Christians in Iraq should live "like all Iraqis in security and peace, and with their full constitutional rights," according to a statement released by the Grand Ayatollah's office.

The Pope in turn thanked al-Sistani and the Shia Muslim community for "[raising] his voice in defense of the weakest and most persecuted, affirming the sacredness of human life and the importance of the unity of the Iraqi people," according to a statement from the Holy See.

Pope Francis's four-day tour of Iraq across six cities is Francis' first trip outside Italy since the coronavirus pandemic began.

The Pope touched down in Baghdad on Friday, where he was met by Iraqi Prime Minister Mustafa al-Kadhimi. Francis later met with clerics and other officials at a Baghdad church that was the site of a bloody 2010 massacre. He returned to Baghdad on Saturday afternoon and was scheduled to celebrate Mass at the Chaldean Cathedral of Saint Joseph.

Iraq has imposed a total curfew for the entirety of the four-day papal visit to minimize health and security risks. Francis is scheduled to leave Iraq on Monday.