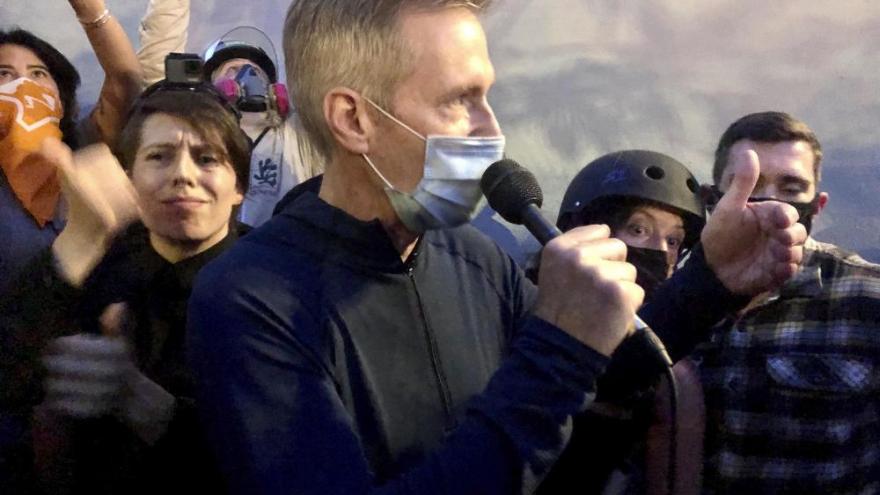 Mayor Ted Wheeler is calling for an immediate meeting with acting Homeland Security Secretary Chad Wolf and other top officials at the department to "discuss a cease-fire" and the removal of federal officers sent there to quell protests.

(CNN) -- The Democratic mayor of Portland is calling for an immediate meeting with acting Homeland Security Secretary Chad Wolf and other top officials at the department to "discuss a cease-fire" and the removal of federal officers sent there to quell protests.

Mayor Ted Wheeler said in a tweet Monday night that both he and Portland City Commissioner Jo Ann Hardesty are calling for a meeting with Wolf and top DHS officials on the ground in Portland "to discuss a cease-fire and the removal of heightened federal forces from Portland."

The mayor has sought to de-escalate tensions in the city between residents there protesting racial inequality and police brutality, and federal agents, who were sent there earlier this month by President Donald Trump in an attempt to protect federal property.

For several nights, the largely peaceful protests in the city have turned violent as a small subset of rioters have set fires and launched fireworks at the city's downtown federal courthouse. The issue has led local Portland city officials and members of the Trump administration to engage in a public war of words over who is to blame for the actions of rioters.

Though Wheeler had already called on the federal agents to withdraw from Portland, his demand for a meeting with DHS signals a shift in his previously entrenched public posture. When asked by CNN last week if he was in touch with Wolf, the mayor downplayed the need for any communication.

"I have no reason to reach him," he said. "My demands are clear. I want them to leave."

Wheeler and other Oregon officials have been critical of the tactics of the federal agents. Recent videos from the scenes of the protests show DHS personnel arresting protesters and putting them in unmarked SUVs.

In one such video that was shared on Twitter by Oregon Sen. Jeff Merkley, two masked, camouflaged individuals with generic "police" patches, detain a person dressed in a black outfit and place them in an unmarked van before driving away. US Customs and Border Protection has identified the officers as belonging to that agency, and indicated the man was wanted for questioning regarding a possible crime. However, a DHS official said he was later released.

"The tactics that the Trump administration are using on the streets of Portland are abhorrent," Wheeler told CNN's Jake Tapper on "State of the Union" last week. "People are being literally scooped off the street into unmarked vans, rental cars, apparently. They are being denied probable cause. And they are denied due process."

Wheeler himself was tear gassed last week after he joined crowds to listen to protesters and answer their questions in response to the violent clashes between demonstrators and federal forces. It's unknown at this time who is responsible for deploying the tear gas and there is nothing to indicate the mayor was targeted.

The actions by the agents are now under review by the inspectors general of the Justice Department and DHS.