Portland protests wind down after 13 arrested and six injured 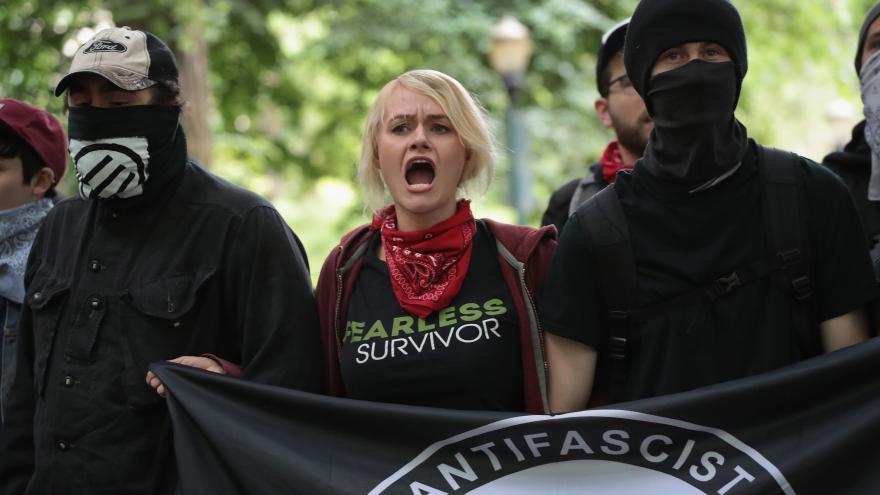 (CNN) -- More than a dozen people were arrested Saturday and six others were injured as left-wing anti-fascist demonstrators spent hours counter-protesting against a rally by far-right and extremist groups.

Thirteen people were detained for a variety of charges including disorderly conduct, interfering with police, unlawful use of a weapon, and possession of a weapon on the park, Police Chief Danielle Outlaw said.

It was unclear which groups those arrested were affiliated with.

Outlaw said one person who was injured during the day's events was taken to a hospital. Four other people with minor injuries were evaluated on scene, the chief said.

Saturday's demonstrations came after days of Portland authorities condemning hate and warning residents to stay home as far-right groups planned a rally aimed at putting an "end to domestic terrorism," with a particular focus on Antifa extremist groups.

There were fears the rally could prompt violent clashes between both a smattering of right-wing extremists and Antifa counterdemonstrators, like those the city has seen in recent years.

More than 700 law enforcement officers worked to keep the opposing groups separate, Lt. Tina Jones said. There were some "limited interactions between individuals."

Police also had several encounters with demonstrators, Outlaw said, including one where an officer used PepperBalls, which disperses pepper spray after it hits something.

Saturday morning, before events in Portland had gotten underway, President Donald Trump said "major consideration" was being given to designating Antifa an "organization of domestic terror." He added, "Portland is being watched very closely. Hopefully the Mayor will be able to properly do his job."

Mayor Ted Wheeler responded to the President's tweet in an interview with CNN Saturday, saying, "My job today is to be heads down and focused on maintaining the public safety here in Portland, Oregon. I'm focused on what's going on the ground here in my community."

"And frankly, it's not helpful," Wheeler added. "This is a potentially dangerous and volatile situation, and adding to that noise doesn't do anything to support or help the efforts that are going on here in Portland."