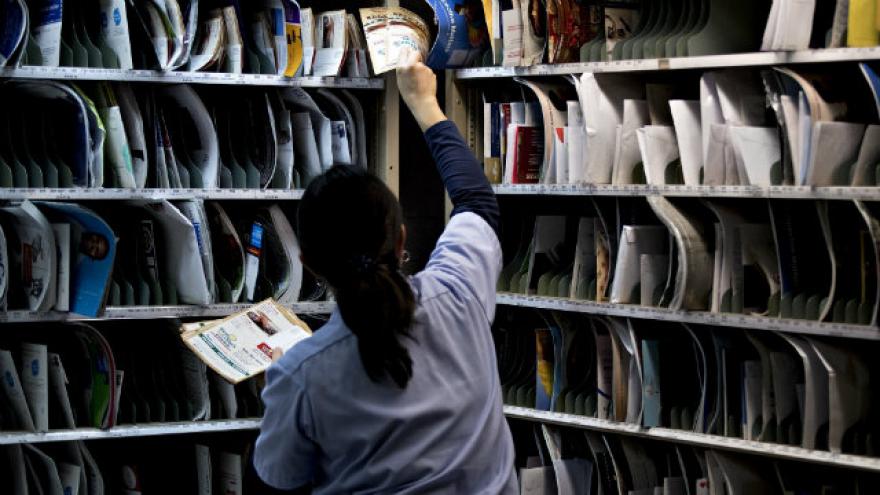 (CNN) -- The US Postal Service is asking for the biggest price jump on stamps in its history.

Facing pressure from the Trump administration to address a revenue shortfall, the Postal Service on Wednesday proposed raising the price of 1-oz. letters from 50 cents to 55 cents, which would be a record nominal increase if approved. The price of each additional ounce would go down slightly.

The request was made by the USPS' board of governors, which has been operating on an emergency basis because of a lack of confirmed members. It will have to be approved by the Postal Regulatory Commission.

"The Governors believe these new rates will keep the Postal Service competitive while providing the agency with needed revenue," the USPS said in a press release. "The Postal Service has some of the lowest letter mail postage rates in the industrialized world and also continues to offer a great value in shipping."

Rates for mailing services -- which includes catalogs and magazines as well as letters -- are pegged to consumer prices. Those have been rising faster this year, but still limited the price hike for that category to 2.5 percent.

Prices for packages, however, can float with market rates. The USPS wants to boost Priority Mail prices by an average of 5.9%. A small flat-rate box that costs $7.20 to ship, for example, would next year cost $7.90.

The steep price increases come at a time when the USPS' losses have been mounting, dragged down in part by a requirement that the quasi-public agency pre-fund the cost of retiree health benefits.

As letters and advertising mailers have been replaced by e-mail and online ads, the USPS has been making less and less money. Revenue from first class mail declined from $28.4 billion in fiscal year 2015 to $25.6 billion in 2017.

Package revenues fueled by the rise in e-commerce have been a bright spot, bringing in $19.5 billion in 2017, up from $15 billion in 2015. But it hasn't made much of a dent in the $58.7 billion net deficit that the Post Office has accumulated over the years.

The White House has proposed privatizing the Post Office, a plan that postal unions protested in nationwide demonstrations on Monday.

President Donald Trump has repeatedly criticized the terms of USPS' contract to deliver Amazon packages, the details of which are confidential. The Postal Service says it makes a profit through the arrangement.

"Why is the United States Post Office, which is losing many billions of dollars a year, while charging Amazon and others so little to deliver their packages, making Amazon richer and the Post Office dumber and poorer?" Trump tweeted last December. "Should be charging MUCH MORE!"

In April, Trump ordered a review of the Postal Service's business model by a task force led by the Treasury Department. Postal Service spokesman Carl Walton says the review has been completed, but that the agency hasn't seen it yet.

"I think they're waiting until after the elections," Walton said. "We're waiting just like everybody else."