Postmaster General to testify before Senate on Friday 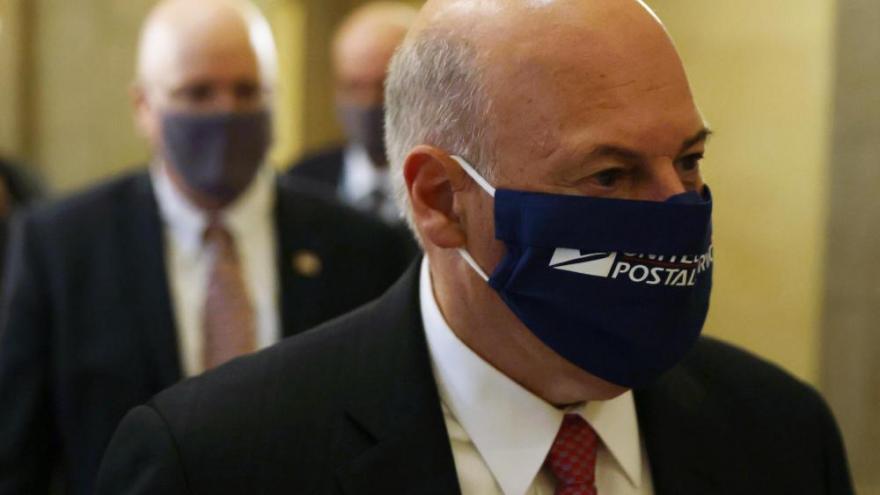 Postmaster General Louis DeJoy arrives at a meeting at the office of House Speaker Nancy Pelosi at the US Capitol on August 5 in Washington, DC.

It will be the US Postal Service chief's first opportunity to publicly answer questions amid accusations that the Trump administration is purposefully handicapping the USPS in an effort to hinder mail-in voting during the pandemic.

Democrats on the House Oversight Committee announced earlier this week that DeJoy and USPS Board of Governors Chairman Robert Duncan would testify before their committee on Monday.

Lawmakers from both parties and postal union leaders have sounded alarms over procedural changes instituted by DeJoy this summer, including eliminating overtime and slowing some mail delivery.

DeJoy acknowledged to USPS employees this week that the cost cutting measures have had "unintended consequences," but defended them as necessary.

Democrats have claimed that DeJoy, who has been an ally of President Donald Trump and Republican donor, is intentionally undermining Postal Service operations to sabotage mail-in voting in the November election -- a charge DeJoy denies.

Sen. Gary Peters, the top Democrat on the Senate Homeland committee, said in a statement Tuesday that he was "pleased to have secured an oversight hearing ... in order to address urgent questions on Postal Service delays."

Peters, who's up for reelection in Michigan this fall, announced earlier this month he was launching an investigation into the backlog at the USPS, and because Democrats are in the minority, pushed Homeland Security Chairman Ron Johnson, a Wisconsin Republican, for a hearing with DeJoy.

CNN first reported that DeJoy still owns at least a $30 million equity stake in his former company -- a USPS contractor -- and that he recently bought stock options for Amazon, a USPS competitor. These holdings likely create a major conflict of interest, ethics experts told CNN, though DeJoy and USPS maintain that he has complied with all federal requirements.