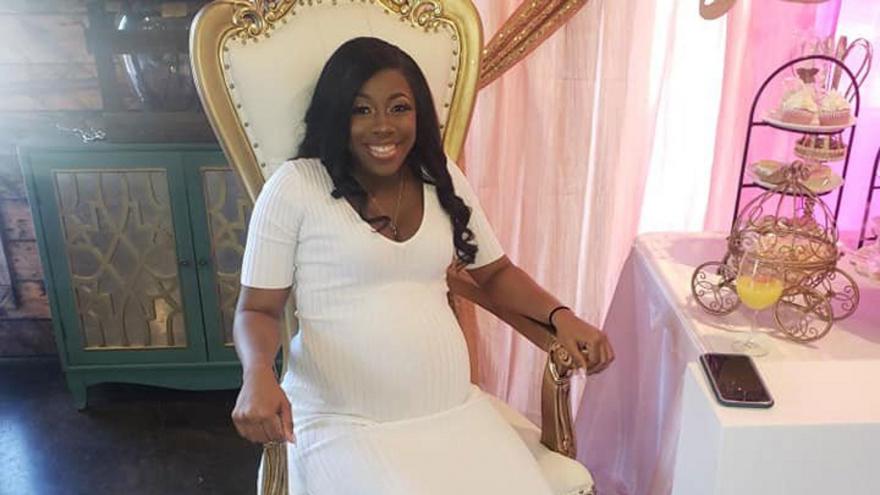 Mashayla Harper was 36 weeks pregnant before she lost her unborn child after what police say was a hit-and-run.

(CNN) -- Mashayla Harper was nearly killed on her way home from her baby shower after what police say was a hit-and-run. Her unborn child didn't survive.

A service for her unborn daughter was held Wednesday, but she was unable to attend because she has been in the hospital since Saturday's crash.

Harper was 36 weeks pregnant, according to CNN affiliate WDAM.

"That was very emotional. We were looking forward to [the baby] being here. She was going to be a spoiled baby," Harper's father, Maurice Pruitt Sr., told CNN on Wednesday.

Thirty minutes after her baby shower in Jones County, Mississippi, Pruitt says he received a hysterical phone call from Mashayla's mother, Chandra Harper. She had been driving about six or seven cars behind her 24-year-old daughter when traffic suddenly stopped. She asked someone what happened up ahead and a driver told her a pregnant woman had just got into a car accident.

Pruitt says Chandra instantly knew it was her daughter. She found Mashayla on the ground in front of her car. Pruitt says they are unsure how she got there, but the driver's door was missing due to the accident.

The driver of the vehicle that hit the fourth-grade math teacher fled the scene, but was apprehended late Saturday, Pruitt told CNN.

James Gilbert, 35, was charged with leaving the scene of an accident with injuries, according to WDAM. It is unclear whether he has legal representation.

CNN has reached out to the Jones County Sheriff's Office, but has not heard back.

Harper was taken to South Central Regional Medical Center, according to WDAM.

Her father tells CNN that doctors informed the immediate family that her unborn child had died 45 minutes later.

Doctors told the family Harper had suffered severe trauma, including abdominal, knee and leg injuries. Pruitt said doctors didn't think she was going to survive the surgeries and that she was revived at least once. He described Harper as a "strong woman."

Following surgery Saturday night, she was put on life support and was finally taken off Monday afternoon. Pruitt says while she is in and out of sleep, Mashyala kept asking her mother about the baby. He says Chandra was unsure how to tell her daughter about the baby's passing lest her blood pressure rise. The family told her Monday evening.

A GoFundMePage was created to assist with Mashyala's medical bills and lost income. As of Thursday evening, the page had raised nearly $8,000.

Pruitt says his daughter is recovering pretty quickly. "She went from being on life support on Saturday to being in her own [hospital] room today."

"The better [Mashayla] gets the better everybody will get. I got her to smile last night," Pruitt said.