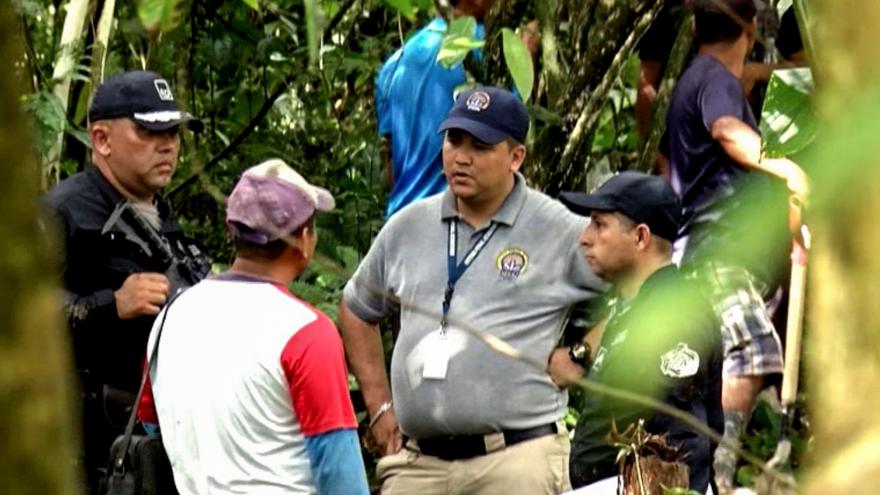 Panamanian police near the site where the mass grave was found. Credit: HO/TVN Noticias/AFP via Getty Images
By Rob Picheta and Jack Guy, CNN

(CNN) -- A pregnant woman and six children -- including a 1-year-old baby and a 3-year-old -- were tortured, slaughtered and buried in a mass grave in Panama as part of a bizarre, ritualistic killing by a religious cult, authorities have said.

Nine indigenous people have been arrested and will be charged over the grisly attack, which took place in a remote part of the Ngäbe-Buglé region, home to a large community of native Panamanians.

Authorities said the bodies of three boys and three girls -- two 9-year-olds, plus others aged 1, 3, 11 and 17 -- were found in the grave. The 32-year-old mother of five of the children, who was between four and six months pregnant, was also found dead in the grave.

The victims were killed for not repenting for their sins, the region's public prosecutor, Rafael Baloyes, told reporters. He added that the cult had been active for around three months but had not harmed people until this attack -- prompted when one of its members believed they had received a message from God.

Police raided the premises of the obscure cult and rescued a further 15 people whom they believe were next in line for a similar murder, according to a statement from the public prosecutor's office.

They arrested several people and found sufficient evidence to connect them to the killings, including machetes and other tools that police believe were used to kill the victims. One of those arrested was the grandfather of some of the murdered children.

"It appears they were members of a religious cult that carried out rituals and they were apparently responsible for the crime," Baloyes said in the statement.

The cult called itself "Church of God," he said.

Baloyes added that authorities carried out an investigation in local communities to see whether anyone else was missing, but didn't find any more victims.