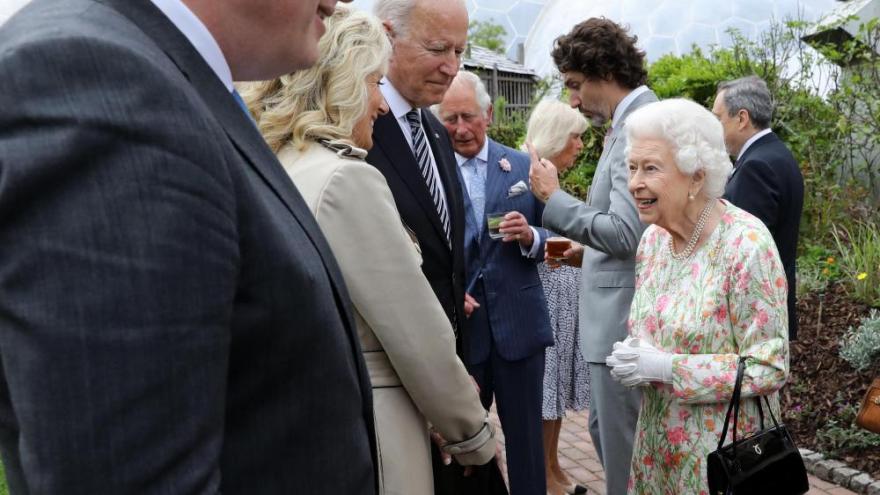 Britain's Queen Elizabeth II speaks with US President Joe Biden and US First Lady Jill Biden and leaders of the G7 during a reception at The Eden Project in south west England on June 11.

(CNN) -- When Joe Biden was preparing for his first audience with Britain's Queen Elizabeth II as a young senator, his mother -- an Irish American born with the surname Finnegan -- had a piece of advice.

"Don't you bow down to her," she told him in 1982, according to a memoir Biden published several years ago.

On Sunday, Biden met the Queen again. He did not bow.

Afterward, he described her as an "extremely gracious" woman who reminded him of the mother who offered him that advice 40 years ago.

Arriving to the interior quad of Windsor Castle in a dark Range Rover alongside his wife, Biden emerged wearing a signature pair of aviator sunglasses as he stood to chat briefly with the 95-year-old monarch.

Only after listening to the "Star Spangled Banner" did Biden remove his glasses to survey a cordon of red-suited, bearskin-hatted Grenadier Guardsmen. Biden and the Queen then walked inside the castle for their private talks. They could be heard in light conversation.

Biden is now the 12th sitting president to meet the Queen during her reign, joining a legacy of American leaders paying their respects to a global icon and living piece of history.

He and first lady Jill Biden met her at Windsor Castle, her home outside London. It was her first one-on-one engagement with a world leader since the coronavirus pandemic began. And it's among her first public engagements since her husband, Prince Philip, died at 99 earlier this year.

The meeting followed the end of Biden's first G7 summit, held on England's southwestern coast, which wrapped up Sunday afternoon. Biden has spent his first international trip aiming to revive American alliances with the world's richest democracies. After meeting the Queen, he'll head to Brussels where he will spend two days meeting with more US allies at NATO headquarters and the European Union, before heading to Geneva to meet with Russian President Vladimir Putin.

"We've just wrapped up what has been an extraordinary and collaborative and productive meeting at the G7," Biden said at a news conference following the G7 and ahead of his meeting with the Queen. "Everyone at the table understood and understands the seriousness of the challenges we are up against and the responsibility of our proud democracies to stand up and deliver for the rest of the world."

His first encounter with the British monarch this week came Friday evening, when she joined world leaders at a reception held at a biosphere in Cornwall. After posing for a photo, she took a light jab at the staged camaraderie.

"Are you supposed to be looking as if you're enjoying yourself?" she said.

Later she was pictured in friendly conversation with Biden and his wife outside the futuristic domes, her son Prince Charles and his wife Camilla clutching drinks in the background.

Sunday's occasion was more personal, with only Biden and his wife meeting the Queen in her home.

The President said the Queen wanted to know about Russian President Vladimir Putin, whom Biden will meet on Wednesday, and Xi Jinping, the Chinese President.

Speaking at Heathrow Airport before departing the United Kingdom, Biden said he wished he could have spoken to the Queen for longer.

"She was very generous," Biden said. He said he did not think she'd be insulted if he said she "reminded me of my mother in terms of the look of her and the generosity."

Asked if he'd invited her to the White House, Biden said he had.

For Biden, the moment places him within a long roster of predecessors who also came to visit one of the world's most famous women. A student of history who has consumed biographies of past presidents, the moment provides a living link to the office he now holds.

The Queen also helps further Biden's efforts to inject wartime urgency into this week's G7 and NATO summits, including by renewing the Atlantic Charter signed by US President Franklin Delano Roosevelt and British Prime Minister Winston Churchill during World War II. The Queen served as an Army mechanic in the war.

American presidents often find themselves charmed by the Queen after meeting her.

"The Queen has been a source of inspiration for me, like so many people around the world," President Barack Obama said during a visit to London in 2016, when Prince Philip drove him in a Range Rover from Marine One to the doors of Windsor Castle. "She is truly one of my favorite people."

President Donald Trump also held a special affection for Queen Elizabeth, having watched his own mother -- born in the Outer Hebrides of Scotland -- rapt with attention viewing her coronation on television.

Unlike Trump or Obama, Biden is not an Anglophile. He's a proud Irish American who has (sometimes jokingly) made references to the long British rule over his ancestors' island. This week, he confronted Prime Minister Boris Johnson over issues related to Northern Ireland, concerned that Britain's exit from the European Union is jeopardizing the hard-won peace there.

And among the first things he did upon landing in the United Kingdom on Wednesday was to quote William Butler Yeats, the most famous 20th-century Irish poet, from his poem about the Easter 1916 uprising against British rule. He also quoted the American Declaration of Independence.

The Irish allegiances aside, Biden was unlikely to air his grievances when he sat down with the British monarch on Sunday afternoon.

"Joe and I are both looking forward to meeting the Queen. That's an exciting part of the visit for us," Jill Biden told reporters this week. "We've looked forward to this for weeks and now it's finally here. It's a beautiful beginning."