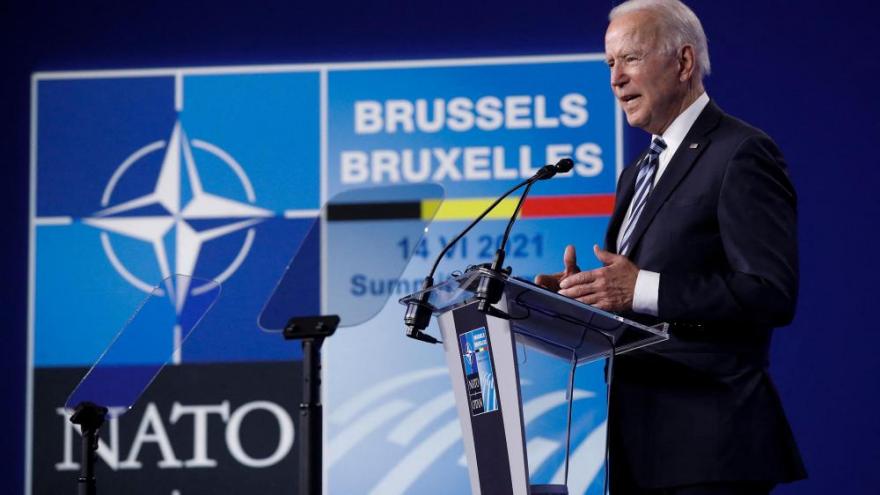 US President Joe Biden gives a press conference after the NATO summit at the North Atlantic Treaty Organization (NATO) headquarters in Brussels, on June 14. Biden arrives in Geneva ahead of lengthy and contentious talks with Vladimir Putin, the capstone on a European tour designed to show western solidarity ahead of the momentous summit.

(CNN) -- President Joe Biden arrived in Geneva on Tuesday ahead of lengthy and contentious talks with Vladimir Putin, the capstone on a European tour designed to show western solidarity ahead of the momentous summit.

Biden has spent the past week consulting fellow leaders, national security aides and political advisers, reading through extensive preparation materials and thinking about what exactly he will say to the Russian President when they sit down in an 18th century lakeside Swiss villa Wednesday.

At meetings of the Group of 7 and NATO, he discussed the upcoming summit with at least two dozen foreign leaders, from the Chancellor of Germany to the leaders of the tiny Baltic states to the right-wing President of Poland. He was even quizzed on the meeting by Britain's Queen Elizabeth II over tea at Windsor Castle.

"He's bright, he's tough, and I've found that he is, as they say when I used to play ball, a worthy adversary," Biden told reporters of Putin on Monday during a press conference at NATO headquarters. The event was delayed nearly three hours as Biden met with an onslaught of fellow leaders eager for an audience with the new American leader.

He has declined to say what specifically he will relay to Putin during their talks, which are set to begin midday. Instead, he's provided a broad outline of his message and insisted a face-to-face is necessary to lend a degree of stability to US-Russia relations.

"I'm going to make clear to President Putin that there are areas where we can cooperate if he chooses. And if he chooses not to cooperate and acts in a way that he has in the past relative to cybersecurity and some other activities, then we will respond," he said.

"I have a very different view than my predecessor"

Before he left Brussels, Biden arrived at a summit with European Union leaders that officials said would focus largely on issues of trade. Biden has yet to roll back Trump-era tariffs on steel and aluminum, but he did help settle a dispute that had dragged on for nearly two decades over subsidies for Boeing and Airbus.

The two sides were expected to announce a resolution of the aircraft dispute, and signal progress on the metal tariffs without formally announcing their suspension quite yet.

Biden is eager to restore transatlantic ties on his European tour this week, hoping to enter the high-stakes summit with Putin appearing united with western allies. That has mostly come in statements of support, but the trade dispute resolution is a concrete signal of his intent to normalize traditional US alliances after four years of strain.

"America is back. We are committed -- we have never fully left -- but we are reasserting the fact it is overwhelmingly in the interest of the United States to have a great relationship with NATO and with the EU," Biden said as the talks began. "I have a very different view than my predecessor."

"The last four years have not been easy," said von der Leyen.

Officials want to ease trade tensions ahead of Biden's meeting with Putin to put on a united front against Moscow. It's likely he will also discuss his agenda for the Putin summit with the European leaders.

Biden held a meeting with a group of Russia experts earlier this month to get their input on dealing with Putin ahead of the summit, a person familiar with the meeting told CNN. Among the attendees was Angela Stent, former national intelligence officer for Russia and Eurasia at the National Intelligence Council, former US Ambassador to Russia Michael McFaul, former National Security Council Senior Director for Russia Fiona Hill, former Ambassador to Russia John Teft, the controversial Russia expert Matthew Rojansky and former Deputy Secretary General of NATO Rose Gottenmiller. Axios was first to report the meeting and attendance of McFaul, Hill, Teft and Gottenmiller.

The consensus of this group was that Biden shouldn't hold a joint press conference with Putin at the end of their talks, according to sources familiar with the discussion.

The meeting echoed preparations for a Russia-focused meeting that Biden held when he was vice president, according to a formal official.

Biden has also opened the door for input to other key allies in bilateral meetings and conversations on the margins over the last several days. The idea serves dual purposes, aides said: While Biden's decades in foreign policy give him a self-assurance about his approach, he sees value in the views of others who have had similar meetings with the Russian leader.

Biden also sees merit in allies feeling a part of his process as he makes an effort to reassure them in his intentions while bringing them closer. It's part of a clear US effort to arrive at the Putin meeting after public displays of unity among Western allies, according to a person familiar with the process.

"Every world leader here that's a member of NATO thanked me for meeting with Putin now. Every single one," Biden said in Brussels after he attended a summit of the defense alliance. He said he'd found "a consensus and they thanked me for being willing to talk with them about the meeting and what I intended to do."

Looking for a predictable relationship

But officials say Biden is also preparing to discuss with Putin areas of potential mutual interest, laying out a potential pathway to move a relationship that he acknowledged Sunday was at a low point. There are obvious issues, ranging from Afghanistan and the Iran nuclear deal to the nuclear capabilities of both nations, where communication and a working relationship is considered critical.

There are also more incremental steps Biden may propose to establish a baseline between a new administration and a long-standing foe, one person familiar with the preparation said. The goal isn't any kind of dramatic breakthrough, and Biden and his aides alike have been careful to make clear there is no expectation of anything of the sort.

As Biden becomes the fifth straight American president with whom Putin has met, officials want Biden to be prepared for the Russian leader's tactics, including his well-known habit of turning discussions of Russia's bad practices back on the United States. Biden has told aides he believes Putin will respond to directness during their talks and wants to be ready to offer a frank message.

Officials also said they were mindful of Putin's desire to appear like he'd gotten the better of a US president, and wanted to avoid a situation that devolved into a tit-for-tat playing out in public.

"This is not a contest about who can do better in front of a press conference or try to embarrass each other," Biden said on Sunday, explaining the decision.

Biden will meet with Putin in two sessions, one a smaller group and one with a larger contingent of aides, according to a White House official.

It was still being worked out with the Russians what the exact composition of each meeting will be, though Secretary of State Anthony Blinken and Russian Foreign Minister Sergey Lavrov are expected to participate.

A Kremlin spokesman said in Russian state media on Tuesday it was possible the two leaders meet one-on-one.

"As for whether the presidents will want to step aside and have a real one-on-one talk, I don't know, it's up to them," the Kremlin spokesman said.