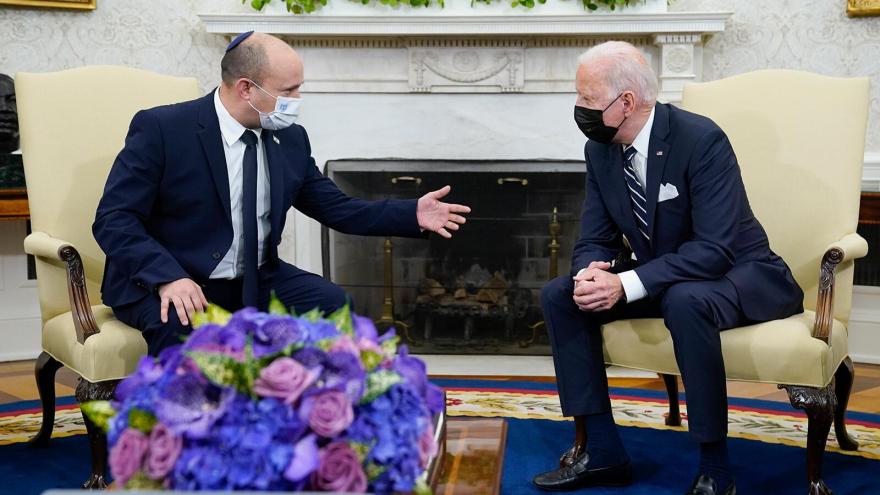 President Joe Biden will visit Israel "later this year" after Israeli Prime Minister Naftali Bennett invited him to the country. Biden and Bennett are shown here in the Oval Office of the White House on August 27, 2021, in Washington.

(CNN) -- President Joe Biden will visit Israel "later this year" after Israeli Prime Minister Naftali Bennett invited him to the country, according to a readout of a call between the two on Sunday released by the White House.

The White House said the two leaders "discussed the shared security and other challenges in the Middle East region, including the threat posed by Iran and its proxies."

In addition, Biden "underscored his commitment to expanding stability and partnerships across the Middle East region, as exemplified by the Abraham Accords, together with Israelis and Palestinians enjoying equal measures of security, freedom, and prosperity."

The two discussed Wednesday's counterterrorism raid in northwestern Syria that led to the death of ISIS leader Abu Ibrahim al-Hashimi al-Qurayshi. It was the biggest US raid in the country since the 2019 operation that killed ISIS leader Abu Bakr al-Baghdadi.

Bennett congratulated Biden on the operation and said that "the world is now a safer place thanks to the courageous operation of the US forces," according to a statement from the Israeli government.

Bennett and Biden also discussed the possibility of further Russian aggression against Ukraine, according to the readout.

The pair first met at the White House in August when Bennett said in remarks from the Oval Office that he sought to bring a "new spirit" to the relationship between the two governments.

"A spirit of good will, a spirit of hope, a spirit of decency and honesty, a spirit of unity and bipartisanship, of folks who -- as you suggested -- harbor very different political opinions, even opposing, yet we all share the deep passion to work together to build a better future for Israel," Bennett said at the time.

In warm remarks at the time, Biden hailed Bennett's coalition as the "most diverse government in Israeli history," and said the US was committed to ensuring Iran never develops a nuclear weapon.

The President spoke in only broad terms during that meeting about other issues in the region, saying he planned to discuss "ways for increased peace and prosperity for Israelis and Palestinians."

"The US will always be there for Israel. It's an unshakable partnership between our two nations," Biden said in August.