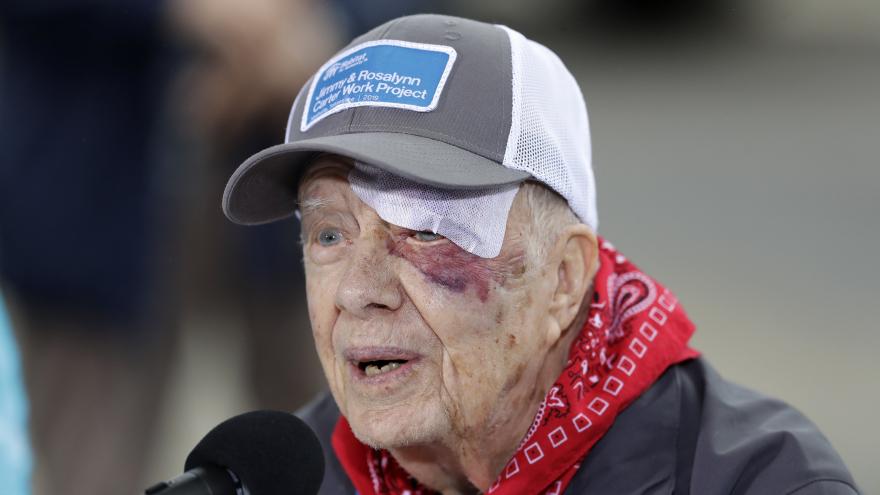 Former President Jimmy Carter answers questions during a news conference at a Habitat for Humanity project on October 7, 2019, in Nashville, Tenn. Carter wears a bandage after a fall the day before at his home in Plains, Georgia. Carter will have to take another week to rest and recover, the church announced on Facebook. It\'s the second time Carter has taken a fall this month. Source: Mark Humphrey/AP
By Harmeet Kaur, CNN

(CNN) -- Turns out, Jimmy Carter will be teaching Sunday school in Plains, Georgia, this weekend.

Maranatha Baptist Church, where the former President has taught for years, announced on Tuesday that Carter had made a recovery and would indeed be back on November 3, despite an earlier announcement that he would have to miss this week's session.

"UPDATES: We are proud and relieved to announce President Carter has changed his mind and decided that he feels well enough to to teach," the church wrote on Facebook." Please join us to welcome him back! We will live stream for those who can't be with us."

On Monday night, Maranatha Baptist Church said that Carter would be taking time to rest and recover after falling in his home in Plains on October 21.

Pastor Tony Lowden said last week that the former President was in "great spirits" and that the two prayed together.

It's Carter's second fall this month

After his fall last week, Carter was admitted to Phoebe Sumter Medical Center for a minor pelvic fracture, Deanna Congileo, director of communications for the Carter Center, said in a statement. On Thursday, the Carter Center announced that he had been released.

"He is looking forward to continuing to recuperate at his home in Plains, Georgia and thanks everyone for their kind wishes," Congileo said in a statement.

It was the second time this month that the former President, who recently turned 95, took a fall in his home.

Carter fell and hit his head in early October while getting ready for church, requiring 14 stitches above his brow. But he didn't let that stop him from heading to Nashville that afternoon for a week of building houses with Habitat for Humanity.