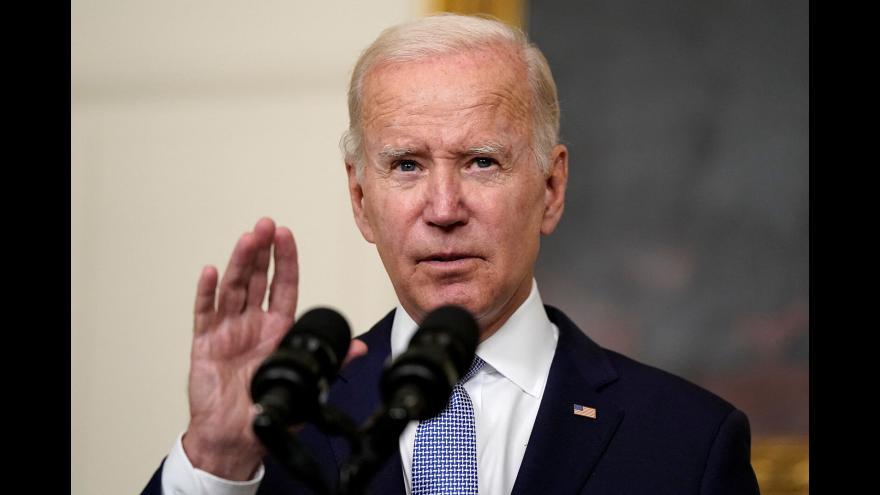 President Joe Biden gestures as he delivers remarks at the White House on July 28, 2022.

(CNN) -- President Joe Biden tested positive for Covid-19 again Saturday morning, per a letter from presidential physician Dr. Kevin O'Connor, in what is likely a "rebound" Covid-19 positivity that the doctor noted is "observed in a small percentage of patients treated with Paxlovid."

Biden has experienced "no reemergence of symptoms, and continues to feel quite well" and will, as a result, not resume treatment, the White House said. O'Connor said the President tested negative on Tuesday evening, Wednesday morning, Thursday morning and Friday morning before testing positive on Saturday morning.

"However, given his positive antigen test, he will reinitiate strict isolation procedures," the doctor noted. Biden ceased isolating on Wednesday after testing negative on successive antigen tests, celebrating his return in remarks from the White House Rose Garden.

Biden's physician said the President is not experiencing any symptoms but that he will isolate at the White House.

"Folks, today I tested positive for COVID again," Biden wrote on Twitter. "This happens with a small minority of folks. I've got no symptoms but I am going to isolate for the safety of everyone around me. I'm still at work, and will be back on the road soon."

White House press secretary Karine Jean-Pierre wrote Biden is "asymptomatic, feeling fine, and working in isolation from the Residence to protect others."

The President had resumed events at the White House after testing negative this week, though he was seen wearing a mask more regularly. White House officials said they worked to ensure there was social distancing at the public events he held at the White House.

Biden, 79, first tested positive on July 21. During his first bout with the disease, he experienced mild symptoms, including runny nose, fatigue, high temperature and a cough, according to his doctor. The President completed a five-day course of Paxlovid, which requires a doctor's prescription and is available via emergency use authorization from the US Food and Drug Administration for treatment of mild to moderate Covid-19 in people 12 and older who are at high risk of severe illness.

When Biden first tested positive last week, the White House said he'd had 17 close contacts, none of whom ended up testing positive themselves.

First lady Jill Biden remains in Delaware, where she has been since the President first tested positive for Covid-19, a White House official told CNN. She has not been back to the White House.

The first lady had been scheduled to join the President when he traveled to Wilmington on Sunday.

The US Centers for Disease Control and Prevention issued a health alert to doctors on May 24 advising that Covid-19 symptoms sometimes come back, and that may just be how the infection plays out in some people, regardless of whether they're vaccinated or treated with medications like Paxlovid. The CDC said most cases of rebound involve mild disease and that there have been no reports of serious illness.

Biden is fully vaccinated and received two booster shots. He received his first two doses of the Pfizer/BioNTech Covid-19 vaccine ahead of his inauguration in January 2021, his first booster shot in September and his second booster vaccination in March.

White House officials had previously suggested a rebound case of Covid was unlikely, based on reports of cases around the country. However, Biden continued to be tested and monitored.

Infectious disease experts have been calling on the government to study instances of rebound more systematically, saying the phenomenon needs to be better characterized to understand who is most at risk and whether the standard five-day course of treatment with the drug should be lengthened to prevent it. Studies have shown that people can pass the infection to others during a rebound, which is another reason to better understand it.

Pfizer, the company that makes Paxlovid, has said its studies show rebounds are rare and happen in people who take the drug as well as those who took a placebo pill. Because investigators noted the phenomenon in both groups, the company doesn't believe it is tied to the medication.

National Institute of Allergy and Infectious Diseases Director Dr. Anthony Fauci also experienced rebound Covid-19. His symptoms got worse when they returned after treatment, and his doctors prescribed another course of Paxlovid.