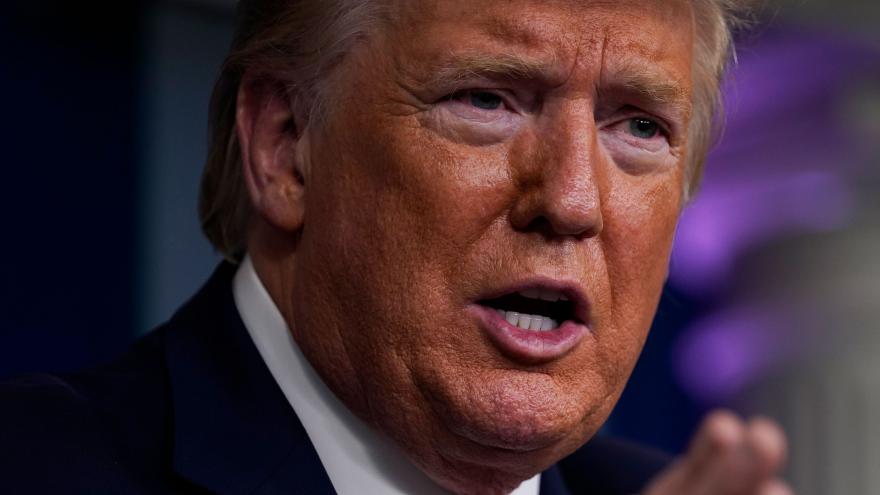 (CNN) -- President Donald Trump said Sunday that the federal government has activated US National Guard units for three of the states hardest hit by the novel coronavirus -- New York, California and Washington state.

"And through (Federal Emergency Management Agency), the federal government will be funding 100% of the cost of deploying national guard units to carry out approved missions to stop the virus while those governors remain in command," the President said at a White House briefing.

Trump described the federal government as a "backup" to the state leaders, underscoring the importance of keeping governors "in command."

"We'll be following them and we hope they can do the job and I think they will. I spoke with all three of the governors today, just a little while ago and they're very happy with what we're going to be doing." Trump said.

The comments come as millions of people in a growing number of states face orders by their governors aimed at keeping them home to prevent further spread of the coronavirus.

There are at least 32,149 cases of the novel coronavirus in the country, according to CNN Health's tally of American cases that are detected and tested in the United States through US public health systems. At least 400 people have died.

The White House news conference comes hours after New York Gov. Andrew Cuomo pleaded with Trump to nationalize the effort to acquire medical supplies at a time when state leaders say they've been forced to compete with one another for essential equipment.

"I think the federal government should order factories to manufacture masks, gowns, ventilators, the essential medical equipment that is going to make the difference between life and death," Cuomo said earlier during a news conference Sunday.

"It's not hard to make a mask or PPE (personal protective equipment) equipment or a gown, but you need companies to do it," the New York governor said.

The President has already approved disaster declarations for New York and Washington and said the declaration for California should be approved soon.

Trump also said at the briefing that in addition to supplies, he has instructed FEMA to provide:

The supplies should be in New York and California within the next 48 hours, Trump said.

He added there will be two naval hospitals, one on the West Coast, and one on the East Coast, that will be activated. After some discussion, the USS Mercy will be sent to Los Angeles and not Washington state.