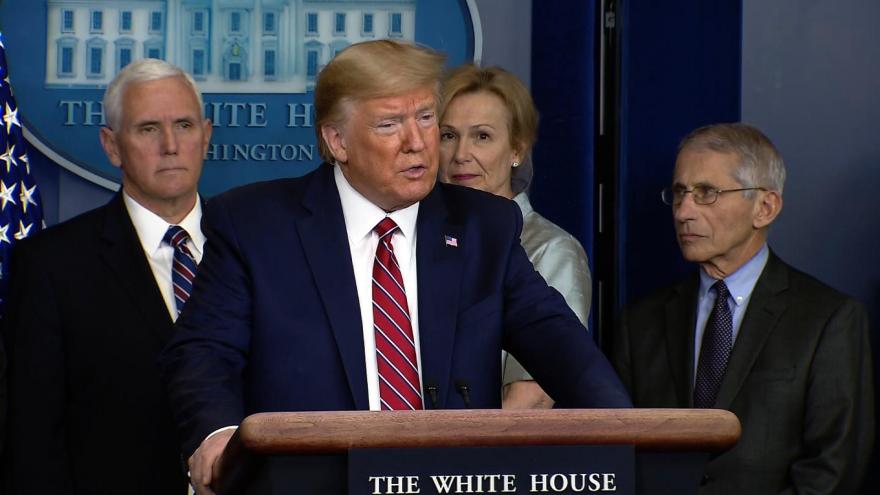 Pressure mounts for President Donald Trump to actually use the Defense Production Act.

(CNN) -- President Donald Trump has repeatedly said he's invoking the Defense Production Act to ramp up production, but he hasn't wielded his federal powers yet as health officials voice alarm about potential shortages of lifesaving medical supplies like ventilators and protective gear for doctors on the front lines of the coronavirus pandemic.

Trump signed the measure after several people urged him to act amid mounting concerns over a supplies shortage, a person familiar told CNN. But as he signed the emergency bill earlier this week, the administration had yet to conduct a full account of inventory across the nation, nor had it identified which companies it would need to make which products. That still hadn't been done as of Friday night, this person said, despite Trump insisting the act would be used to acquire "millions of masks."

Amid the confusion over whether he'll act or not, several companies have cast doubt on whether the President needs to carry out orders under the Defense Production Act at all. And several aides have privately advised against it.

The Defense Production Act, legislation passed in the 1950s on the cusp of the Korean War, provides the President with a broad set of powers to require businesses to "prioritize and accept government contracts" as well as "provide economic incentives" to ensure the US has the stockpiles it needs to handle an impending medical crisis.

On Friday night, General Motors announced in a statement -- first reported by the Detroit Free Press -- that it would work in coordination with a ventilator company to help increase production.

Still, Democrats on Capitol Hill are urging the President to fully unlock the powers now or face a supply shortage that may not be able to be reversed in time. And there is little evidence that the law is being used to direct any manufacturers to boost production of critical equipment.

Now the President is caught in between those who think he should use the power more broadly and those who argued he should have never invoked it in the first place.

While the administration spent the middle of the week engaged in voluntary conversations with automakers like General Motors and Ford about retooling factories to make ventilators, a person familiar with those discussions told CNN the conversations had not been happening in the context of the Defense Production Act. In fact, while some medical supply companies are independently ramping up production of key equipment, there's little evidence that Trump is actively using his powers under the act to direct any of the activity.

Groups such as the American Medical Association as well as congressional Democrats -- in the midst of negotiating a massive $1 trillion stimulus package -- have tried to urge Trump to act with urgency and use his legal powers.

On a call with Trump on Friday, Senate Minority Leader Chuck Schumer asked the President to use the law to make ventilators immediately.

According to a Schumer aide, "POTUS told Schumer he would, and then POTUS yelled to someone in his office to do it now."

But just over an hour later, Trump muddied the message when, asked by reporters about his plans to invoke the Defense Production Act, he said he'd already kicked it into "high gear" without providing answers as to which companies he was working with on it. Instead, Trump argued that companies were voluntarily contacting the White House about ways they could help convert their factory floors to making products that may be in short supply.

"Amazing things are happening. We are getting calls from automobile companies and other companies saying they have capacity and they want to make ventilators and other things. We are literally being besieged in a beautiful way by companies that want to do the work and help our country," Trump said.

On Friday, the confusion continued when, on a call with House lawmakers, Democratic Rep. David Cicilline of Rhode Island pressed administration officials on how exactly the Defense Production Action was being used. Cicilline said he didn't get a clear answer and instead was told the administration was discussing all possible options.

"I can't seem to get an answer from anyone within the administration as to what they are doing," Cicilline told CNN in an interview. "There was a general 'all those issues are in discussions.' This is not the time you should be having discussions."

A Department of Health and Human Services spokesperson told CNN that "HHS has been transparent that more supplies are needed -- hence the request to Congress for additional funding to procure more and scale up production. Manufacturers are currently scaling up production of personal protective equipment, such as masks and gloves. The role at the federal level is to appropriately implement regulatory relief, provide alternative sources and support manufacturing, and help to appropriately target distribution to areas in need."

The business community, which Trump relies on for support, has quietly expressed concern about what the Defense Production Act could mean for business, especially in light of an economic downturn. Instead, it would prefer to step in voluntarily. According to one business association familiar with the conversation, the preference was "just tell us what we need to do and we'll do it."

Many Republicans on Capitol Hill have echoed the same sentiment. Another source involved in conversations said the business community is making contingency plans for the Defense Production Act in case it is used. In discussions this week, some business leaders discussed what exactly the war-era act could look like in modern times.

"Industry is stepping up to rapidly retool. They mostly just need waivers from (regulations) and standards to rapidly redeploy," one Republican aide said. "Don't need DPA to do that."

The latest Republican stimulus proposal included a provision to help incentivize companies to jump in to produce needed medical supplies by establishing liability protection for the manufacturers of respirators and personal protective equipment.

Still, Democrats have continued to hammer the administration for not immediately doing more to produce ventilators and protective equipment. On Friday, 18 Democratic senators sent a letter to the President urging him to immediately carry out orders through the Defense Production Act.

"Our domestic industries are ready and waiting for the call to respond to the critical ongoing shortages of key medical equipment and supplies," the Democrats wrote. "But they need capital, federal contracts, and other assurances in order to act. We can activate America's ingenuity and resolve by immediately providing that financial incentive and direction through the full use of DPA authorities. We urge you to move forward in using these authorities immediately, for the sake of the health and well-being of the American people."