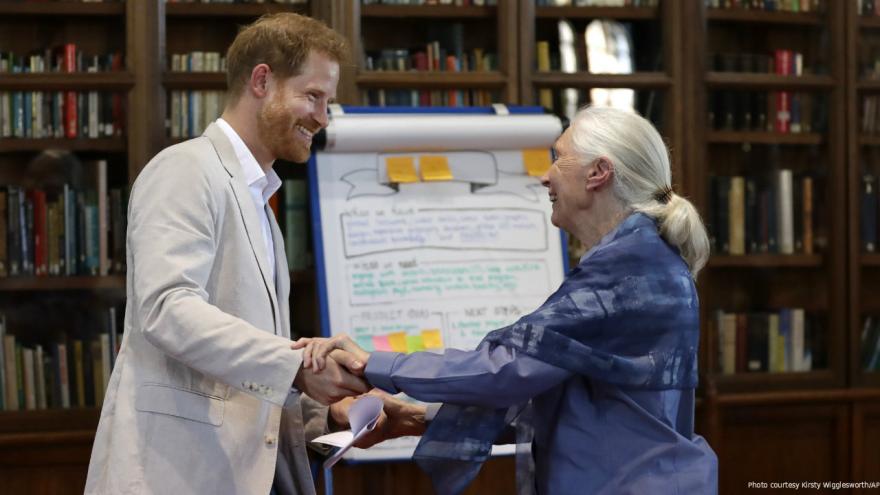 (CNN) -- Prince Harry and world-renowned primatologist and conservationist Jane Goodall greeted each other on Tuesday in unorthodox fashion.

The Duke of Sussex gave Goodall what's known as a "chimp greeting" by bending down and patting her on the head before the two hugged.

"As my grandmother The Queen once said, 'Sometimes the world's problems are so big we think we can do little to help,'" the Duke said on Tuesday. "On our own we cannot end wars or wipe out injustice, but the cumulative impact of thousands of small acts of goodness can be bigger than we imagine."

The duke, who often participates in conservation efforts, attended a Tuesday meeting and listened to presentations on endangered species and reducing plastic waste before greeting the students.

"His Royal Highness believes that people are at the heart of conservation and sustainability and that in order to succeed we need an inclusive, community-centred approach," the Duke and Duchess of Sussex's Instagram said in a post.

This was the third time that the two met. They first met in December 2018 to discuss the Jane Goodall Institute's Tanganyika Catchment Reforestation and Education program and involving local African communities in conservation efforts, according to Goodall Institute spokesman Shawn Sweeney.

"We know that (Prince Harry) is keenly involved in youth and global environmental issues and Dr. Goodall believes that his visit will inspire the participants knowing that someone of his stature is eager to learn of their efforts," Sweeney said in a statement to CNN.

The Duke and the Duchess of Sussex pledged to focus their Instagram on raising awareness of environmental issues during July.

"There is a ticking clock to protect our planet - with climate change, the deterioration of our natural resources, endangerment of sacred wildlife, the impact of plastics and microplastics, and fossil fuel emissions, we are jeopardizing this beautiful place we call home - for ourselves and for future generations. Let's save it," a June 30 post reads.