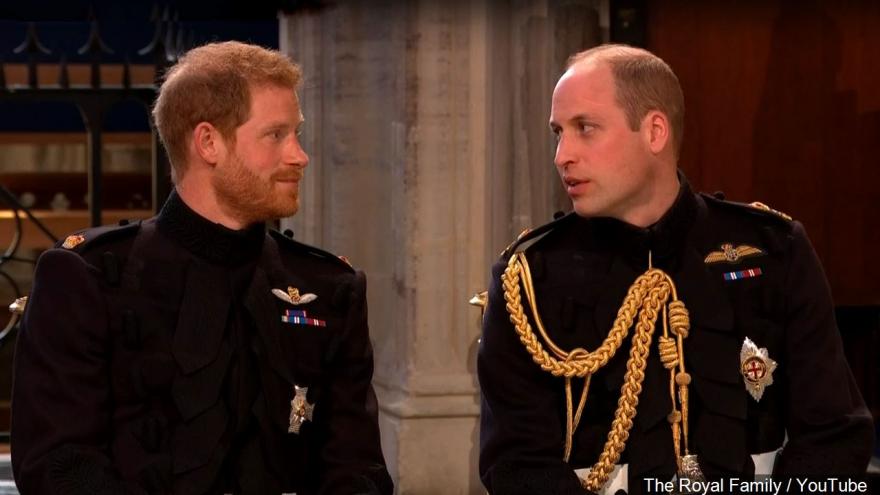 (CNN) -- Princes William and Harry have denied a UK newspaper story alleging that a rift in the royal family was caused by William's "bullying attitude."

"For brothers who care so deeply about the issues surrounding mental health, the use of inflammatory language in this way is offensive and potentially harmful," the statement said.

It followed a story in the Times of London on Monday, reporting that the Duke and Duchess of Sussex, Meghan and Harry, felt "pushed away" by William's "bullying attitude."

The article suggested the brothers "fell out because William wasn't friendly towards Meghan" and that the Sussexes were "constantly being bullied."

Harry and Meghan shocked the world and "disappointed" the rest of the royal family last week when they announced they would be scaling back their official duties to pursue their private interests.

They added that they wanted to work towards becoming financially independent.

Royal sources have told CNN it wasn't the decision itself but the timing of their announcement that left senior members of the family feeling hurt.

Queen Elizabeth II, Harry's grandmother, had expressly asked the prince to hold off releasing any statements regarding the couple's future, CNN understands.

The royal family is set to hold a summit Monday to discuss Harry and Meghan's future, a palace source told CNN on Saturday.

The Queen, Prince Charles, Prince William and Prince Harry will all attend the meeting at Sandringham, the Queen's country estate in rural Norfolk, about 100 miles north of London.

Meghan, who has returned to Canada -- where the couple and their baby son Archie spent the Christmas holidays -- is expected to call in. It's unclear when she will return to the UK.

The summit will be the first time the senior royals have met since the Sussexes made their announcement on Wednesday.

In spite of the way it has unfolded, the couple's decision to step back from senior royal duties is not that surprising. While it may have come as something of a bombshell to casual observers, the writing had been on the wall for some time.

Harry and Meghan have both spoken previously about the toll public scrutiny has taken on them. Harry also flagged up the possibility of living abroad during the couple's controversial TV documentary, which aired in October.