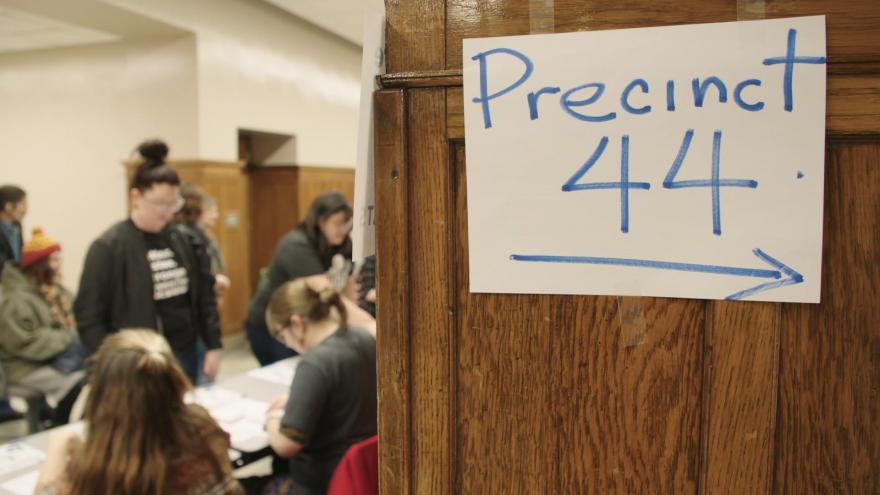 The mobile app that has apparently caused issues during the Iowa caucuses is due to be used in the Nevada Democratic caucuses later this month, a person familiar with the app told CNN.

(CNN) -- The Nevada Democratic Party said Tuesday that it will not use Shadow Inc., the maker of the app that caused reporting issues in the Iowa caucuses, to power its state caucuses later this month, despite already paying tens of thousands of dollars to the Democrat-affiliated technology company.

In a statement, state Democratic Party Chairman William McCurdy II promised that Nevada's caucuses on February 22 will not be a repeat of Iowa's.

"We will not be employing the same app or vendor used in the Iowa caucus," he said. "We had already developed a series of backups and redundant reporting systems, and are currently evaluating the best path forward."

A person familiar with the Iowa app had previously told CNN that Nevada was also expected to use Shadow's software in a matter of weeks.

Expenditure data reported by the Nevada Democrats showed that they had paid $58,000 to Shadow last year.

The app was built to collect and report the caucus results, but some precinct officials said they had issues reporting the results of their caucuses through the app.

Shadow apologized in a series of tweets Tuesday afternoon, marking its first public comment about the problems.

"We sincerely regret the delay in the reporting of the results of last night's Iowa caucuses and the uncertainty it has caused to the candidates, their campaigns, and Democratic caucus-goers," the company said.

The issue, according to the tweeted statement, "did not affect the underlying caucus results data," and Shadow said it "worked as quickly as possible overnight to resolve this issue, and the IDP has worked diligently to verify results." The company vowed to "apply the lessons learned in the future," adding that it has corrected the underlying technology issue.

A cascading series of problems

The software issues were the start of a cascading series of problems -- including difficulties getting through on the phone to report results after precinct officials had trouble with the app -- that led the Iowa Democratic Party to hold off on releasing results on Monday night.

Officials from multiple precincts described to CNN having problems with the app and the reporting process, though some others did say the software performed as needed.

Polk County Democratic Chairman Sean Bagniewski told CNN early Tuesday morning that tests of the app last week did not go entirely smoothly. Last Thursday, Bagniewski advised precinct chairs who couldn't get the app to work to call in their results to the Iowa Democratic Party.

In a statement Monday night, the IDP said "this is simply a reporting issue, the app did not go down and this is not a hack or intrusion."

The Democratic National Committee sent an email to presidential campaigns last Thursday, including details about the app, but saying "the reporting app was not built by the DNC team. We are sharing on behalf of the vendor and IDP [Iowa Democratic Party]."

A copy of the email was obtained by CNN.

Troy Price, the chair of the Iowa Democratic Party, told campaigns in a letter obtained by CNN that a "coding issue" with the app was preventing it from transmitting accurate data.

"While the app was recording data accurately, it was reporting out only partial data," Price wrote. "This issue was identified and fixed." Price added that paper backups have successfully validated the data that made it into the app.

One precinct chair in Iowa describing the failure of the app, saying that the app got stuck on the very last step when reporting results, which was uploading a picture of the precinct's results.

The chair said they were finally able to upload and screenshotted what they uploaded. Then the app showed different numbers than what they had submitted as captured in their screenshot.

A Democratic source tells CNN that the issue seems to lie with a major coding error in the app that was discovered once data started flowing into the IDP, and party officials began to see discrepancies in the three data streams as the results started coming. The source said that it took time for party officials to identify the issue and try to address it, and they noted there was not a problem with the raw data being put in by the individual precincts.

The IDP pushed heavily to make this year's caucus a high-tech affair. In addition to the app, it initially proposed a new "virtual caucus" system that would see caucusgoers voting by smartphone -- an idea that national party officials quickly shot down over security concerns.

Shadow's involvement was first reported by HuffPost, and a person familiar with the app told CNN it was built by Shadow Inc.

On its website, Shadow describes itself as a technology company serving progressive campaigns, and says that its employees previously worked for Hillary Clinton and Barack Obama's campaigns, as well as the AFL-CIO and the Democratic National Committee.

A CNN review of IDP's expenditures showed that it had made payments to Shadow, the company that built the app, in 2019, totaling more than $60,000.

"ACRONYM is a nonprofit and not a technology company," said Tharp. "As such, we have not provided any technology to the Iowa Democratic Party, Presidential campaigns, or the Democratic National Committee."

Tharp acknowledged ACRONYM's role as one of a number of investors in Shadow. But he added that "we, like everyone else, are eagerly awaiting more information from the Iowa Democratic Party with respect to what happened."

Shadow's background is primarily in voter-contact technologies such as text messaging, the official said, not app development.

"Our impression was they don't do software development, to be honest," the official said. "It was surprising to see them in all of this, because it seemed like their main work was more like organizing and get out out the vote through technology services. Our impression from some conversations with them was that that was not their area of expertise."

A review of the company's staff on LinkedIn appears to bolster the claim. Of 10 employees who self-identified as working for Shadow, only its chief technology officer, Krista Davis, listed any significant programming experience.

Davis spent eight years at Google as a senior software engineer, according to her profile, working on teams developing Google Hangouts and Google Docs. James Hickey, Shadow's chief operating officer, spent two years as a quality assurance engineer at Apple, according to his LinkedIn profile. The company also has several junior developers and interns who completed their coding certifications only in the last couple of years.

The official predicted that the company's foray into software development could be set back by the Iowa episode as other states reevaluate the company's technology.

"I can almost guarantee you, after all of this, I cannot imagine them going forward with Shadow during their caucuses," said the Democratic official.

On paper, Shadow's offices are located in a WeWork co-working space at the end of a hip, industrial-looking alley in Washington. A mural graces the wall at one end of the alley, which also boasts a trendy La Colombe coffee shop. The entire aesthetic befits the cool startup personality that Shadow seeks to convey on its website.

But Shadow is no longer at the temporary work space address listed in Iowa state records from just a couple of months ago.

When CNN visited Shadow's offices Tuesday morning, a receptionist at the WeWork space said the company had moved out of its space roughly a month ago.

It was not immediately clear where the company had relocated, but the receptionist said that Shadow had occupied the WeWork space for some time before vacating the co-working site.

Others worked with Shadow

The Texas Democratic Party acknowledged on Tuesday that it had also hired Shadow, but a spokesman for the state party, Abhi Rahman, said the business relationship was limited to Shadow's voter texting service.

"It's very important to note here that we did not use them for any web development or app services," Rahman told CNN.

Rahman said that Shadow was one of a number of different texting vendors that the state party has used for get-out-the-vote efforts in Texas.

According to Federal Election Commission records, the Texas Democratic Party paid Shadow a combined $250 last year in two separate payments -- one in May and one in September.

Mayor Pete Buttigieg's campaign also acknowledged hiring Shadow, but like the Texas Democratic Party, said it only used the company for text messaging.

"We have contracted with this vendor in the past for text messaging services to help us contact voters," said a Buttigieg campaign aide. "Totally unrelated to any apps they built for the party."