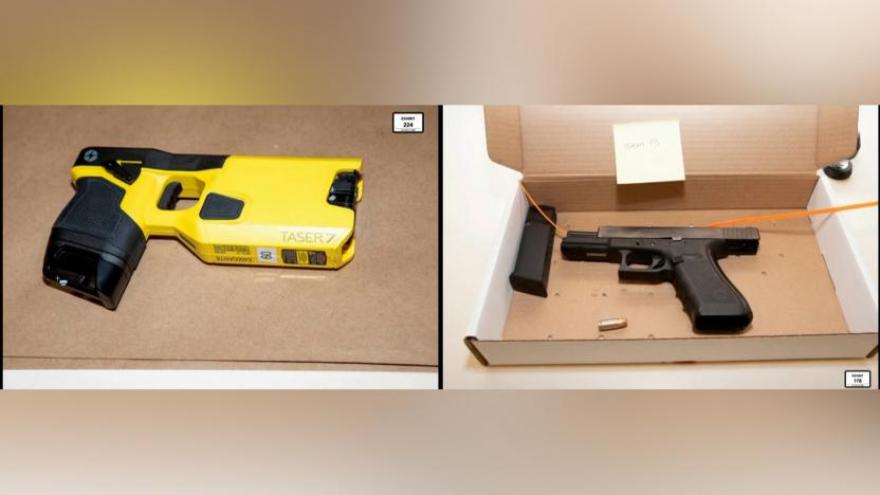 A Taser is shown on the left and a Glock to the right.

(CNN) -- Kim Potter, the former officer who fatally shot Daunte Wright during a traffic stop in suburban Minneapolis, told a state court judge Thursday that she'll testify in her own defense.

Potter, 49, could take the stand as early as Friday -- one day after her former police chief, a law enforcement expert and other defense witnesses were called at her manslaughter trial.

"Mrs. Potter, do you still want to testify or have you changed your mind?" Hennepin County Judge Regina Chu asked the defendant shortly after the prosecution rested its case Thursday morning.

"Yes, your honor, I'll testify," responded Potter, whose testimony could be the centerpiece of her defense.

The state presented more than two dozen witnesses over six days, including a policing expert who testified Wednesday that Potter was not justified in using deadly force when she fatally shot Wright in April. The expert also said the use of a Taser during the stop would have been unreasonable.

After the state rested, Chu denied a defense request for a judgment of acquittal on grounds the state presented conflicting evidence on whether the use of a Taser would have been unreasonable.

Former police chief says he saw 'no violation' of policy

On Thursday, the Brooklyn Center police chief at the time of the shooting, Timothy Gannon, described Potter as a "fine officer" and said he had worked with and known her since 1995.

Gannon, a defense witness, told jurors he believed he was asked to step down days after the shooting because he would not immediately fire Potter. He said his handling of unrest after Wright was killed was another reason city officials asked him to resign.

Video of the April 11 shooting shows officers pulled over Wright and tried to arrest him on an outstanding warrant when he got back in his vehicle and attempted to flee. Potter pulled out her firearm and shot him -- later admitting she meant to use her Taser instead.

"I grabbed the wrong f**king gun and I shot him," she said after the shooting, which happened near the courthouse where former police officer Derek Chauvin was on trial for killing George Floyd in nearby Minneapolis.

Gannon, questioned by defense attorney Earl Gray, testified he concluded there was "no violation" after reviewing body camera and other video after the shooting.

"No violation of what?" the defense lawyer asked.

Gannon told jurors he once felt "sheer terror" after he was dragged by a car in a separate incident, and that he believed deadly force was reasonable against Wright. He testified that a Taser could have been used to stop Wright from fleeing.

The first defense witness, Stephen Ijames -- a law enforcement expert and former assistant police chief from Missouri -- testified Thursday that a Taser would have been effective in incapacitating Wright.

Ijames also told jurors that deadly force is warranted if an officer is partly inside a vehicle as a suspect is attempting to drive away -- a reference to an officer who was reaching into Wright's car when Potter opened fire.

Potter is charged with first- and second-degree manslaughter for killing Wright, a 20-year-old Black man. Potter, who is White, has pleaded not guilty.

Prosecutors have argued Potter was negligent and acted recklessly in mistaking her gun for the Taser.

Her defense has characterized the killing as an accident but argued she was within her rights to use deadly force to protect another officer -- an assertion prosecutors sought to counter with expert testimony.

"The use of deadly force was not appropriate and the evidence suggests that a reasonable officer in Officer Potter's position could not have believed it was proportional to the threat at the time," the law professor testified.

Stoughton, who testified for the state at Chauvin's trial, told jurors the deadly force used against Wright would have been proportional but "inappropriate because of the proximity of two other officers and the passenger."

"The available evidence leads me to conclude that a reasonable officer in Officer Potter's position would not have concluded that there was an imminent threat of death or great bodily harm and thus, that the use of deadly force was excessive, that is disproportionate to the threat presented," Stoughton testified.

"And regardless of whether the reasonable officer would have perceived an imminent threat of death or great bodily harm, the use of deadly force under the circumstances was inappropriate because of the danger that it created to the other two officers and the passenger in Mr. Wright's vehicle."

Ijames on Thursday disagreed with Stoughton on both counts -- testifying that a Taser is the "second best thing" to a gunshot to the head in incapacitating a suspect and deadly force is justified if an officer perceives a colleague is in danger.

The officers, Ijames told jurors, were required by law to arrest Wright on a warrant for an outstanding weapons violation.

Wright's father, Arbuey, fought back tears on the stand Wednesday when prosecutors -- wrapping up their case -- showed photos of him and his son. He recalled supervising his son at a store -- "At work, I was his boss and home I'm your dad."

And the elder Wright described his son's joy at becoming a father. "He was so happy," Arbuey Wright recalled. "He loved his son."

Earlier, a sergeant who trains police officers testified Potter's use of a Taser would have been a "reasonable use of force."

Brooklyn Center Police Sgt. Michael Peterson, who trains officers on Taser use, testified that, while the use of such a device would have been reasonable during the Wright traffic stop, officers can also use deadly force to stop suspects trying to get away.

The decision on what type of force to use -- a Taser or handgun, for instance -- "has to be made in a very short amount of time," Peterson, a witness for the state, testified under cross-examination.

"Mistakes can happen when someone confuses a Taser with a gun?" defense attorney Paul Engh asked the sergeant.

Peterson said using a Taser to stop Wright would have been a "reasonable use of force."

"If that was a training scenario that was put in front of me or one that I created for my officers, the use of a Taser would have been reasonable under those circumstances," the sergeant told Engh during cross-examination.

Peterson told jurors that Potter at the time was using a new Taser that had come out at the beginning of 2021. She had never used a Taser in the field before, he testified.

Potter fully trained in Taser and use of force policy, commander testifies

On Tuesday, jurors heard from a suburban Minneapolis police commander that Potter was fully trained in her department's Taser and use of force policies.

Brooklyn Center Police Cmdr. Garett Flesland, who oversees department training, testified for the prosecution that shooting at occupants of a moving car is "rarely effective." He said firing at a driver could result in the vehicle striking "something or somebody."

On cross-examination, Flesland testified deadly force can be used to save an officer reaching into the vehicle in an attempt to keep a suspect from getting away.

"Potentially yes, but I wasn't there," the commander testified, adding later the threat to another officer leaning over the driver's seat could be "severe and significant."

Flesland testified Potter was fully trained in department policies on use of force, including Tasers. Her most recent training certification on Taser use was in March 2021, he said.

Under questioning by Gray, Flesland said of Potter: "She's a good cop. She's a good person. She's a friend. I have no concerns going to calls with her."

The prosecution objected -- and the judge sustained the objection -- after jurors heard the statements.

Special agent Sam McGinnis of the Minnesota Bureau of Criminal Apprehension on Monday described the Taser and gun differences in appearance, weight and positioning on Potter's utility belt. McGinnis is a state investigative agent responsible for reviewing police shootings.

"The Taser is yellow; the firearm is black," McGinnis said during questioning by the prosecution. "The Taser has a stocky body to it compared to the Glock handgun. The grip of the Taser is shorter and wider than the Glock."

McGinnis' analysis of the two weapons revealed marked differences in weight. Potter's Glock handgun weighed 2.11 pounds, McGinnis said, compared to her Taser that weighed less than a pound. McGinnis said this meant the Glock with the ammo weighed over twice as much as the Taser.

The state investigator also described differences in the ways the two weapons are fired.

McGinnis also testified that he took photos of Potter after the shooting, which showed she kept her firearm and Taser on opposite sides of her body.

"Her firearm was on her dominant side, which you'd have to use your right hand to draw," he said, noting her holster had a snap retention system to keep the gun in its holster.

The Taser, in contrast, was holstered on her left side and required her to push a lever with her left hand to pull it from the holster.

Immediately after the shooting, Wright's car veered across traffic and crashed into an occupied vehicle. His death led to days of unrest in Brooklyn Center.