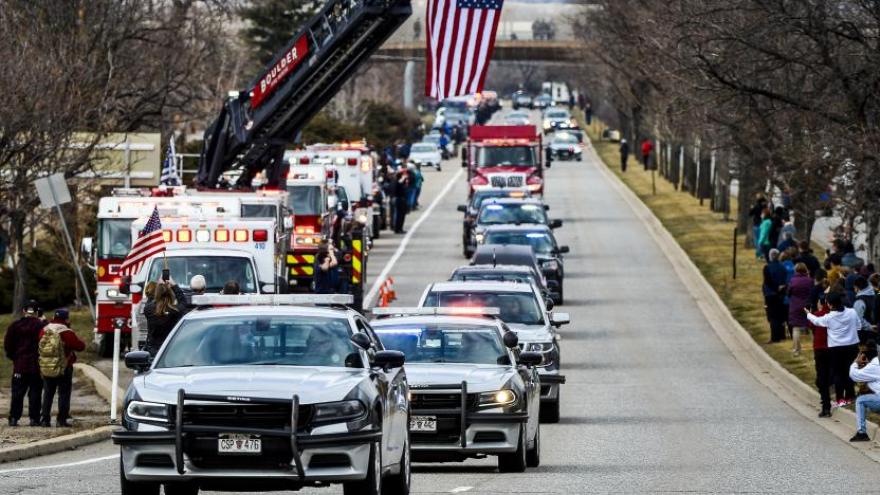 Two days after the community was traumatized by a mass shooting, the people of Boulder honored the victims on Wednesday as support poured in from public figures and citizens around the country.

(CNN) -- A defense attorney for the man charged with killing 10 people at a Colorado grocery store asked a judge Thursday to delay the case's next hearing for weeks because the defense needs to assess what she called her client's mental illness.

During suspect Ahmad Al Aliwi Alissa's first court appearance in connection with Monday's massacre in Boulder, a prosecutor also told the judge he anticipates filing more charges in the case within weeks.

The judge, Thomas Mulvahill, agreed to set the next hearing, a status conference, in "about 60 to 90 days," and ruled Alissa would remain jailed without bond at least until then.

This was the first time Herold publicly mentioned her client's mental health after Monday's killings.

However, investigators have been examining possible mental health questions in the case, a law enforcement official briefed on the investigation previously told CNN on condition of anonymity. Alissa's brother also has said Alissa may have been suffering from mental illness.

Alissa sat in a wheelchair during Thursday's hearing, wearing a blue gown. A mask covered his mouth and nose, looped around his ears. He spoke only when the judge asked whether he understood his rights.

Alissa is accused of opening fire outside and inside the King Soopers store Monday afternoon in the university town of Boulder, killing 10 people -- including a police officer, store workers and shoppers -- as numerous others fled or hid.

Alissa was arrested after he surrendered in the store that afternoon -- with a gunshot wound to the leg -- following a gunfire exchange with police, authorities said.

Alissa has been charged with 10 counts of murder in the first degree and one charge of attempted murder, the district attorney's office said Thursday.

The charge of attempted murder alleges that Alissa tried to kill a separate police officer, according to court documents.

Boulder County District Attorney Michael Dougherty explained "there was an officer who was alleged was shot at but was not injured during the interaction with the accused." The criminal complaint filed Thursday identifies the officer as Richard Steidell.

An arrest affidavit released Tuesday said Steidell saw Alissa with a firearm who "was shooting toward him."

Dougherty told the judge Thursday that he anticipates more charges.

"The crime scene has not yet been completed in terms of processing and we'll be filing additional charges in the next couple of weeks," Dougherty said.

Dougherty told reporters afterward that Thursday's hearing was "the beginning of a lengthy process that I anticipate will take at least a year to try to completion."

Alissa is being represented by public defenders Daniel King and Kathryn Herold, both of whom have a history of defending major cases.

Police have said they're still trying to determine the motive for Monday's shooting, which began in the parking lot and continued inside the store.

Police have said Talley was the first Boulder officer to respond to the scene.

Alissa, after surrendering inside the store Monday, was taken to a hospital for a gunshot wound to the leg. When he was discharged, officers formally took him into custody with Talley's handcuffs, Boulder police said Thursday.

"It was our distinct honor to use Officer Talley's handcuffs to formally process him into the jail," Boulder police said on Twitter. "Though this was a small gesture, we hope it is the start of the healing process that so many of us need at this time."

Investigators are trying to determine motive

Besides trying to determine the motive, investigators are trying to learn why the shooting happened in that particular location, according to the law enforcement official who told CNN about investigators' checks into mental illness.

Alissa's home, in the Denver suburb of Arvada, is about 30 minutes from the store, and other grocery stores are closer to his residence, the official noted.

Investigators suspect the attack was planned, given that authorities say the suspect recently purchased a gun believed to have been used in the shooting, the official said.

The FBI is looking at Alissa's online activity and conducting interviews with friends and relatives, a law enforcement official also told CNN, adding that Alissa was not previously the subject of any FBI investigation and it appears nothing in the federal system would have prohibited him from buying a firearm.

Dougherty, the district attorney, and Boulder Police Chief Maris Herold plan to hold a news conference Friday to address "next steps in the court process, crime scene processing and the role of victim advocates among other topics," according to a news release from the Boulder Office of Emergency Management.

Vigils are held for the victims

The people of Boulder honored the victims Wednesday as support poured in from public figures and citizens around the country.

Conversations in the community also have turned to how to prevent such a loss of life, especially following the mass shootings at three Atlanta-area massage spas that happened less than a week earlier.

Tribute was paid Wednesday to the heroism of Talley, the officer who lost his life at the scene, as people lined the streets Wednesday.

"It's sad but glad we could honor his life," Crystal Hootman told CNN. "I was talking with another resident and we both shop at the grocery store. I'm hoping out of sadness, Boulder becomes an even better place to live," she said.

Talley's body was transported to a funeral home in nearby Aurora, escorted by a procession of police and first responder vehicles.

At the King Soopers store, visitors left flowers and paid their respects Wednesday to the 10 people who died. Chaplains from churches were available to those in need, as well as Cubby, an emotional support golden retriever.

"They take on people's feelings," K-9 Crisis Response Coordinator for Lutheran Church Services Bonnie Fear told CNN affiliate KUSA. "We bring the dogs and bring comfort and smiles and just open up emotions for people so they can start the healing process."

"Of course, the conversation turned toward what can we do to make sure this never happens in another community in our country, and so we explored that a little bit," the mayor told CNN's Pamela Brown. "The President expressed that he regretted that when the first federal assault weapons ban was passed in 1994, that there had to be a 10-year sunset to get that through.

"He further regretted that the sunset occurred, and the ban expired. And then we talked some about what steps could be taken at the federal level to make sure that things like this just don't happen to other communities."

Bianca Porter, a friend of 20-year-old Denny Stong, the youngest victim in Monday's shooting, said she wasn't surprised to hear reports of Stong trying to protect others during the shooting.

"I had no doubt that he lost his life trying to save other people, that's who he was," she told CNN's Erin Burnett Wednesday night.

She shared her favorite memory of Stong, a close friend of four years whom she had texted just an hour before the attack.

"Last year on my birthday, he was one of the only people that got me a birthday present, which made me feel very special," Porter told Burnett. "He was really into aviation and stuff, so he brought his RC (radio-controlled) plane and he was controlling it over the pond and just doing some really cool tricks with it. We were just all laughing and having a great time."

Porter said Stong was dedicated to his work at the supermarket and had dreams of becoming a pilot.

"He was really passionate. Denny had a work ethic like no one else that I've ever met," Porter said. "It's not the most interesting job, but he looked forward to doing it. Never once did I ever hear him complain about having to go into work late or something. He just really did what he could and had no complaints."