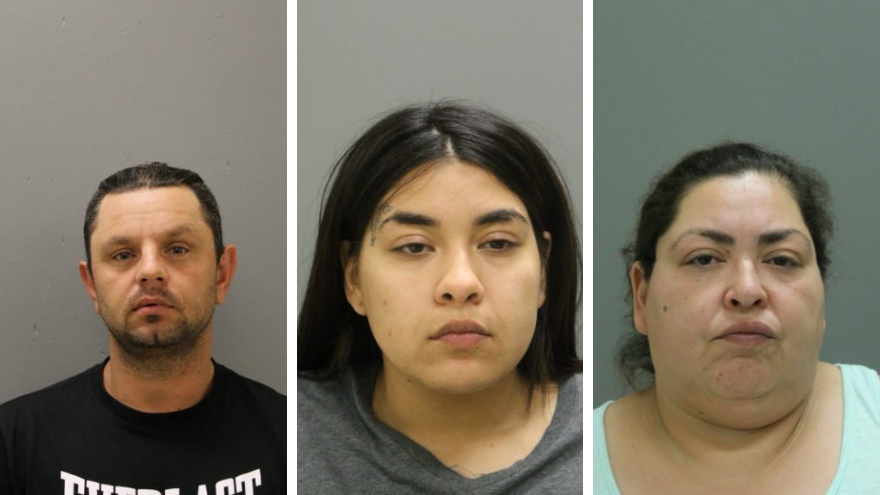 CHICAGO (AP) — A pregnant Chicago teen who was killed and whose baby was cut from her womb was strangled while being shown a photo album of the late son and brother of her attackers, a prosecutor said Friday in urging a judge to keep the defendants locked up.

Assistant State's Attorney James Murphy told Cook County Judge Susana Ortiz that 19-year-old Marlen Ochoa-Lopez managed to get her fingers under the cord around her neck and that the woman strangling her, Clarisa Figueroa, then yelled at her daughter, "You're not doing your f---ing job!"

The daughter, 24-year-old Desiree Figueroa, then pried Ochoa-Lopez's fingers from the cord while her mother continued to strangle the teen for another five minutes, Murphy said. With Ochoa-Lopez showing no signs of life, Clarisa Figueroa, 46, cut her open with a butcher's knife and removed the placenta and baby, which she put in a bucket.

She then put the teen's body in a garbage can and called 911, claiming that her newborn baby was not breathing, authorities said. When first responders arrived, the child was blue. They tried to resuscitate the infant and transported Clarisa Figueroa and the boy to a nearby hospital, where police said he remained in grave condition and was not expected to survive. Figueroa, meanwhile, had blood on her upper body but no physical sign that she'd given birth, according to investigators.

Ortiz denied bond to the Figueroas, who are charged with murder, saying she felt "the presumption is great" that they committed a "heinous and brutal murder" and that they pose "a real and present" danger to the community. She also denied bond to Clarisa Figueroa's boyfriend, 40-year-old Piotr Bobak, who is charged with the concealment of a homicide.

The mother's lawyer asked Ortiz to place the Figueroas in protective custody for their safety, given "the nature of the case."

Clarisa Figueroa apparently wanted to raise another child after her adult son died of natural causes last year, authorities said. Murphy told the court that she told her family last October that she was pregnant and later posted on Facebook ultrasound results and photos of a room decorated for a baby. He said Desiree Figueroa was surprised because her mother had had her fallopian tubes tied to prevent pregnancy.

The arrests came three weeks after the disappearance of Ochoa-Lopez, whose decaying body was discovered this week in a garbage can in the backyard of Figueroa's home on the city's Southwest Side, about 4 miles from Ochoa-Lopez's own home. The cord used to strangle her was still around her neck.

According to police, the young woman had driven from her high school to Figueroa's home in response to an offer of free clothes that Figueroa had posted on Facebook.

Police did not connect the Ochoa-Lopez's disappearance and the 911 call about the baby until May 7, when friends of the teen directed detectives to her social media account, which showed she had communicated with Clarisa Figueroa in a Facebook group for expectant mothers.

At the same time, Clarisa Figueroa had started a GoFundMe campaign for the funeral of what she said was her dying baby, said Sara Walker, a spokeswoman for Ochoa-Lopez's family. Police then conducted DNA tests, which showed that Ochoa-Lopez and her husband, Yiovanni Lopez, were actually his parents, Walker said.

When police arrived to question Clarisa Figueroa, her daughter told them that her mother was in the hospital with some kind of leg injury, before adding that she had just delivered a baby, said Brendan Deenihan, deputy chief of detectives.

"She told an extremely odd story," and officers "kind of knew where this is headed," Deenihan said.

Police then searched the neighborhood and found Ochoa-Lopez's car a few blocks away. On Tuesday they returned with a search warrant, finding cleaning supplies as well as evidence of blood in the hallway and in the bathroom. They later found the body in a trash can behind the house and recovered surveillance video that showed Ochoa-Lopez's vehicle driving through the neighborhood on the day they believed she was killed, authorities said.

Ochoa-Lopez's family had been looking for her since her disappearance on April 23, organizing search parties and holding news conferences as they pushed police for updates in the investigation.

Her father, Arnulfo Ochoa, said relatives were grateful to have found her. Now they want justice. The family was also bracing for the baby's death, while still hoping for a miracle.

"We plead to God that he gives us our child because that is a blessing that my wife left for us," Yiovanni Lopez told reporters through a Spanish interpreter outside the county morgue where his wife's body was taken.

The three suspects were scheduled to appear Friday in bond court.