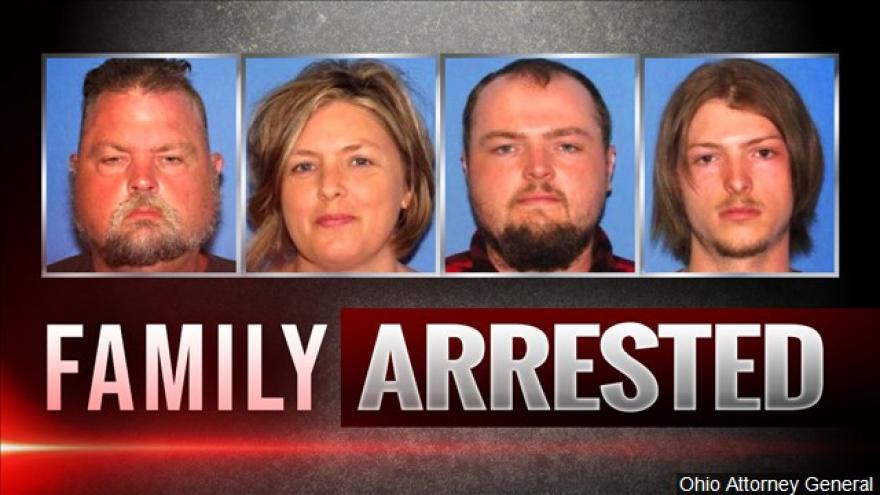 (CNN) -- An Ohio family carefully studied the habits of members of another family -- learning their routines, the layouts of their homes, and where they slept -- before planning a deadly massacre that stunned a rural town, a prosecutor said Tuesday.

The eight victims -- who ranged in age from 16 to 44 -- were found shot to death at four crime scenes in and around the small town of Piketon on April 22, 2016. At one crime scene, police found a 4-day-old baby lying next to his slain mother. That child, along with a 6-month-old and a 3-year-old, survived the killings.

He declined to identify a motive, but said custody of a child "plays a role in this case."

"We believe that the Wagners conspired together to develop an elaborate plan to kill the eight victims under the cover of darkness and then carefully cover up their tracks," DeWine said. "The killers knew the territory and meticulously planned these murders."

George "Billy" Wagner III, 47; his wife Angela Wagner, 48; and their sons, George Wagner IV, 27; and Edward "Jake" Wagner, 26, were indicted on Monday by a Pike County grand jury on several offenses, including eight counts each of aggravated murder with death penalty specifications.

Authorities: One suspect had fathered a child with victims

Edward "Jake" Wagner was also charged with unlawful sexual conduct with a minor for having sexual contact with one victim, Hanna May Rhoden when she was 15 years old and he was 20 years old, prosecutors said.

He is the father of Hanna May Rhoden's older daughter, who was staying with the Wagners on the night of the killings, prosecutors said.

The Wagners are from South Webster, about a 30-mile drive southeast of Piketon, the community in and around where the killings happened.

The six are in custody in Ohio and Kentucky, authorities said.

Piketon is a town of about 2,000 residents, 90 miles east of Cincinnati.

There were no witnesses to the shooting but the suspects left traces, authorities said.

"They left a trail: The parts to build a silencer, the forged documents, the cameras, cell phones -- all that they tampered with, and the lies," Pike County Sheriff Charles S. Reader told reporters.

At request of prosecutors, a judge formed an investigative grand jury in July to meet regularly to examine evidence collected and gather additional evidence, according to DeWine. Investigators discovered a key piece of evidence on October 30, the attorney general said.

Since 2016, investigators conducted more than 500 interviews and followed more than 1,100 leads during the investigation, which took them to 10 states, including Alaska. The Wagners lived in Alaska before recently moving back to Pike County, the attorney general said.

The Wagners had been "the prime suspects for some time," DeWine said, though he declined to say when the family was identified as suspects.

"We promised that the day would come when arrests would be made in the Pike County massacres, " said DeWine , who won the governor's race last week. "Today is that day."