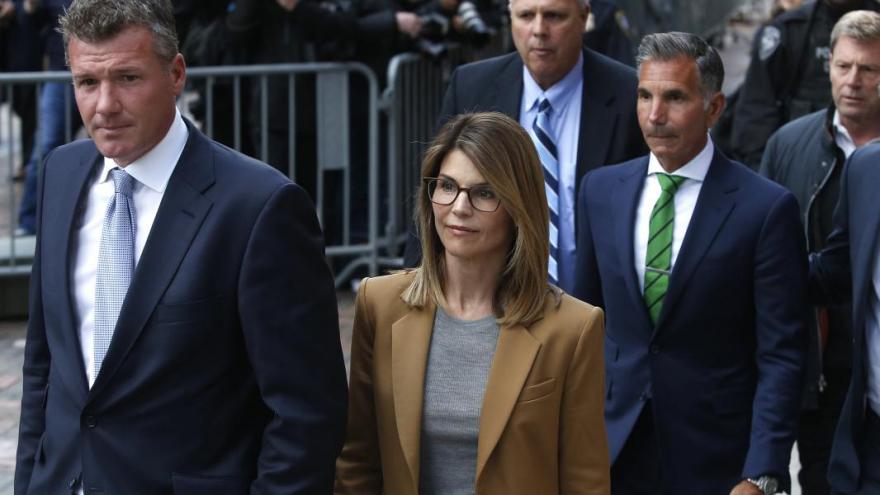 Lori Loughlin, in tan at center, leaves as her husband Mossimo Giannulli, in green tie at right, follows behind her outside the John Joseph Moakley United States Courthouse in Boston on April 3, 2019. Hollywood stars Felicity Huffman and Lori Loughlin were among 13 parents scheduled to appear in federal court in Boston Wednesday for the first time since they were charged last month in a massive college admissions cheating scandal. They were among 50 people - including coaches, powerful financiers, and entrepreneurs - charged in a brazen plot in which wealthy parents allegedly schemed to bribe sports coaches at top colleges to admit their children. Many of the parents allegedly paid to have someone else take the SAT or ACT exams for their children or correct their answers, guaranteeing them high scores. (Photo by Jessica Rinaldi/The Boston Globe via Getty Images)

The sentencing memorandum follows "agreed-upon" terms after Loughlin and Giannulli pleaded guilty to conspiracy charges in May.

Loughlin, best known for her role as Aunt Becky on the sitcom "Full House," and Giannulli had long fought the charges, but in May they pleaded guilty and admitted to allegations that they paid $500,000 as part of a scheme with scam mastermind Rick Singer to get their two daughters into the University of Southern California as fake crew team recruits.

"The crime Giannulli and Loughlin committed was serious," the government writes in the filing. "Over the course of two years, they engaged twice in Singer's fraudulent scheme. They involved both their daughters in the fraud, directing them to pose in staged photographs for use in fake athletic profiles and instructing one daughter how to conceal the scheme from her high school counselor."

The sentencing memo also adds new allegations that Giannulli and Loughlin spoke with their younger daughter, Olivia Jade, about how to deal with a high school counselor skeptical of her crew resume.

When she asked her parents whether she should list USC as her top choice, Loughlin replied, "Yes . . . . But it might be a flag for the weasel to meddle," according to the memo.

Giannulli cursed the counselor and remarked that he was a "nosey bastard," the memo states.

"Don't say too much to that man," Loughlin said.

Prosecutors write that the evidence suggests Giannulli was the more active participant, while Loughlin took a less active role but was "fully complicit."

They call the Giannulli and Loughlin sentence request comparable to those imposed on similarly situated defendants.

Singer has pleaded guilty to racketeering conspiracy and other charges and is cooperating with federal prosecutors. He has not been sentenced yet.