Protesters, ACLU sue over use of force at White House ahead of Trump's church visit 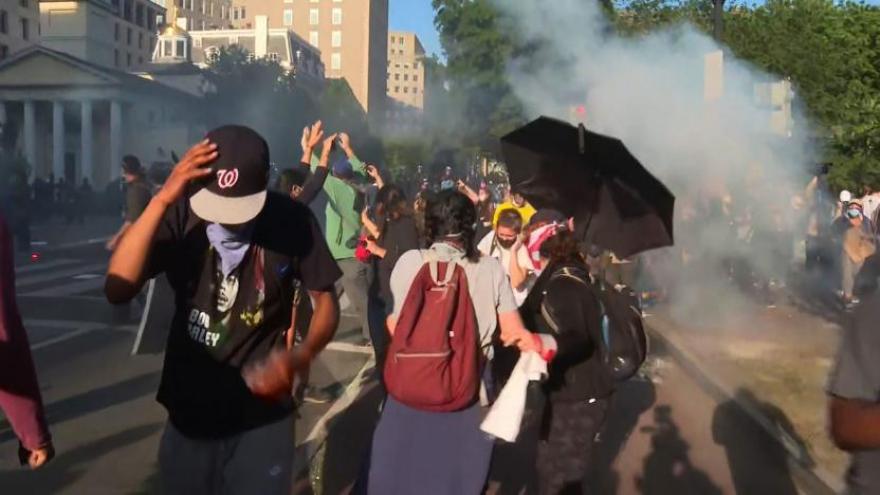 Several protesters and the American Civil Liberties Union filed a lawsuit challenging the federal use of force to disperse a peaceful protest in Washington, DC, ahead of President Donald Trump's photo-op at a local church.

(CNN) -- Several protesters and the American Civil Liberties Union filed a lawsuit Thursday challenging the federal use of force to disperse a peaceful protest in Washington, DC, ahead of President Donald Trump's photo-op at a local church.

The lawsuit -- which names Trump and Attorney General William Barr in their official capacities, as well as other federal officials, as defendants -- says the administration-directed police had "no legitimate basis to destroy the peaceable gathering" of people protesting the death of George Floyd.

"This case is about the President and Attorney General of the United States ordering the use of violence against peaceful demonstrators who were speaking out against discriminatory police brutality targeted at Black people," reads the lawsuit.

During the police effort to clear the crowd Monday, there were reports and eyewitness accounts that canisters were shot in the crowd, putting off thick smoke that contained an irritant that made people choke and cough.

Barr defended those actions Thursday, saying at a news conference that difficulties with relocating authorities had forced the clash. Barr maintained that his decision to disperse the crowd followed signs that the crowd was "becoming increasingly unruly," and had nothing to do with the photo-op at the church.

"There was no correlation between our tactical plan of moving the perimeter out by one block and the President's going over to the church," Barr said.

The episode -- showing federal forces move in on peaceful protesters -- sparked a national outcry, including within the district where Washington, DC, Mayor Muriel Bowser denounced what she described as an attack against protesters. Bowser's attorney general, Karl Racine, has now launched an investigation into the matter.

On Tuesday, Trump took a victory lap on Twitter after declaring "no problems" in DC or Minneapolis Monday night, using terms like "overwhelming force" and "domination."

Plaintiffs in Thursday's lawsuit seized on those words.

"For Defendants to describe their actions as 'domination' is telling. To dominate is to establish supremacy by subjugation of others. It is precisely such domination -- in the form of centuries of white supremacy and subjugation of Black lives -- that was the core focus of the peaceful demonstration in Lafayette Square," the lawsuit, filed in the US District Court for the District of Columbia, reads.

Plaintiffs include residents of Washington, DC, and Maryland who attended the demonstration. The lawsuit also seeks damages for sustained injuries.

The ACLU is also filing lawsuits across the country in response to use of force against journalists.

"The President's shameless, unconstitutional, unprovoked and frankly criminal attack on protesters because he disagreed with their views shakes the foundation of our nation's constitutional order," Scott Michelman, legal director of the ACLU of the District of Columbia, told CNN. "And when the nation's top law enforcement officer becomes complicit in the tactics of an autocrat, it chills protected speech for all of us."

"For the President to refer to this assault as domination is very telling and indicates a willingness to use brute force to trample on the rights of Americans," said Kristen Clarke, president and executive director of the Lawyers' Committee for Civil Rights Under Law. "The Lafayette Square assault amounts to unconstitutional and unlawful state-sponsored violence perpetrated against nonviolent civil rights activists. The actions of the government caused harm and were intended to chill the speech and right to assembly of people exercising constitutionally protected rights. This lawsuit is about defending rights that lie at the heart of our democracy."

CNN previously reported it was ultimately Barr who ordered the move to clear protesters. Barr and other top officials from agencies responsible for securing the White House had planned to secure a wider perimeter around Lafayette Square in response to fires and destruction on Sunday night.

Trump said Wednesday he was unaware of the tactics used to clear the park ahead of his visit to the church.

Trump claimed law enforcement in the area "didn't use tear gas," which is untrue, according to the definition of tear gas used by the Centers for Disease Control and Prevention.

House Democrats have also sought answers from the administration about the events that transpired Monday.

Four Democratic chairmen wrote to Barr, Defense Secretary Mark Esper, Interior Secretary David Bernhardt and acting Homeland Security Secretary Chad Wolf this week seeking information and a briefing about who gave the order to clear the park, which federal agencies were involved and what measures and authorizations were used.

"We want to be clear: the use of federal personnel to prevent American citizens from exercising their Constitutional right to peaceably assemble represents a direct threat to our democracy," the lawmakers said.

Racine, DC's attorney general, is also trying to get answers from state governments and the Justice Department about whether the deployment of National Guard troops to the city this week was appropriate.

In letters sent Thursday night to more than a dozen states that either sent or may have been asked to send troops, Racine asked state leaders to tell the city by Saturday who asked for the troops to go to Washington, what legal authority they had to do so and whom the troops reported to once they arrived.

The states' answers will help Racine's office "fully evaluate whether the federal government's conduct was proper," the letters read.

Racine also sent questions to Barr, Esper and the White House, writing in a letter that "the District government has received very little information about the legal basis for these entities' presence."