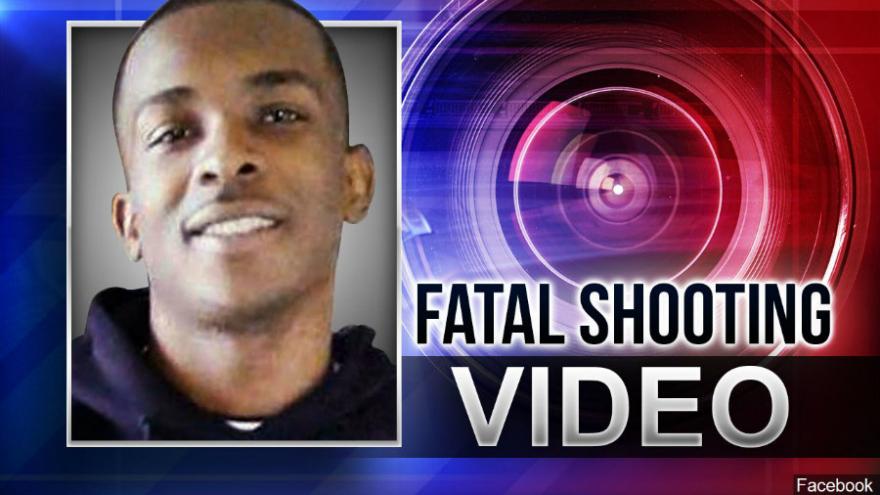 (CNN) -- Protests erupted in Sacramento four days after Stephon Clark, an unarmed black man, was shot by police in his grandmother's backyard. Demonstrators blocked the entrance to an arena where an NBA game was scheduled Thursday, chanting "Black Lives Matter" and the name of the 22-year-oldwho was killed.

Police said the officers who fired at Clark believed he had a gun. Investigators said they did not find a weapon, only a cell phone.

The shooting sparked an outcry in the city, bringing protesters to the Golden 1 Center, where the Sacramento Kings defeated the Atlanta Hawks in a nearly empty arena.

Most ticketholders weren't able to get inside, and the Sacramento Police said via Twitter that "no one else will be admitted to the #SacKings game."

Outside the arena, protesters linked arms and chanted at fans, "Join us or go home!"

The NBA and the Kings made the decision to close the doors, Sgt. Vance Chandler of the Sacramento Police Department told CNN. The game started with a delay and the team said it would refund the tickets.

Protesters began to disperse at night, and police made no arrests.

After the game, Sacramento Kings owner and chairman Vivek Ranadivé addressed the crowd, joined by the team's players, coaches, front office and executives.

"On Sunday we had a horrific, horrific tragedy in our community," Ranadivé said, in reference to the shooting, and conveyed sympathies for the Clark family.

Earlier in the day, protesters had also marched into Sacramento's City Hall and onto an interstate highway as the mayor called for calm.

They called for the arrest of the two officers and demanded to see Police Chief Daniel Hahn as they marched into City Hall. The protest, which was organized by Black Lives Matter Sacramento, briefly spilled onto Interstate 5 after the group left City Hall.

"A phone is not a gun," protesters chanted.

Less than an hour before the protest, Mayor Darrell Steinberg said Clark's death warrants a thorough review of the shooting, and of police policies and procedures.

"It is vital that we give voice to the pain in our community, especially the African-American community," the mayor said.

Steinberg said, "I feel the community's anguish." He called for the public not to rush to judgment until an investigation is completed.

The incident began on Sunday after 9 p.m., when Sacramento officers responded to a report that a man had broken car windows and was hiding in a backyard. They pursued a man who hopped a fence into the grandmother's property.

The shooting was captured by the two officers' body cameras and a police helicopter; that footage was released on Wednesday in an effort to be transparent.Daniel Hahn, who is the first black police chief in Sacramento, told CNN affiliate KCRA that the shooting is "a tragic event for our entire community, so yes, there's a lot of anger. There's a lot of questions."

When asked whether releasing the videos increased trust with the police department, he said: "I have seen some of the conversations change since we've had that video released to the facts of the case, as opposed to filling in the facts because there is a void of facts. I think that's a positive change."

On Sunday, officers fired 20 times at Clark, hitting him multiple times, police told CNN affiliate KOVR. The two officers have since been placed on paid administrative leave amid a use of force investigation.

The body camera videos show the brief encounter between police and Clark, lasting less than a minute, from the moment one of the officers yelled: "Hey, show me your hands. Stop. Stop."

Seconds later, officers opened fire as they took cover near a wall.

As more police arrived at the scene, someone is heard asking, "What did he have on him?"

An officer responded "... something in his hands. It looked like a gun from our perspective."

Clark's grandmother said she was inside the house when the shots were fired, and saw her grandson with an iPhone. Stevante Clark, Stephon's brother, said the two often stayed at their grandmother's house.

He said his brother was a father of two. He was fashionable and got regular manicures and pedicures.

"He was like Ric Flair," his brother said, referring to the stylish wrestler. "He was an entrepreneur. He would make money selling shoes ... playing online for video games."