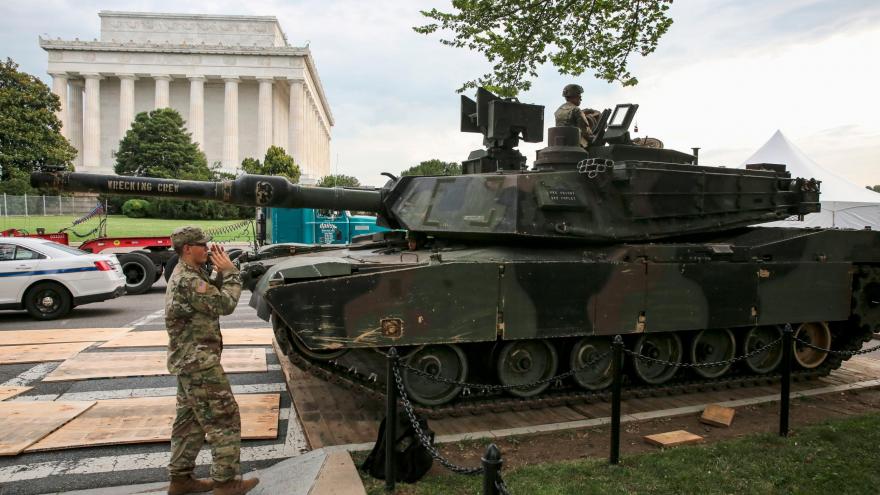 (CNN) -- Leftist protesters burned an American flag outside the White House on Thursday and then clashed with supporters of President Donald Trump, including the far-right Proud Boys group, not long before Trump took the stage for his "Salute to America."

The protests, which turned into violent clashes at times, took place just blocks from crowds who had gathered to watch Trump's July Fourth speech and fireworks displays on the National Mall.

Led by activist Joey Johnson, a group from the Revolutionary Communist Party, USA, linked arms and set an American flag on fire outside as they chanted, "America was never great." The Secret Service intervened quickly to extinguish the fire.

After the flag was extinguished, Johnson's group clashed with a group of pro-Trump protesters, who began chanting, "Trump 2020." The two groups traded chants and scuffles that occasionally turned violent.

Multiple protesters, including Johnson, were escorted from the scene in handcuffs by the Secret Service. A news release after the event from the Revolutionary Communist Party, USA, said Johnson was among those arrested.

Among the protesters were members of the Proud Boys, a far-right group with ties to white nationalism. The Southern Poverty Law Center has designated the organization a hate group.

The Secret Service tweeted a statement later Thursday that said there had been two arrests, though it included no names. One of those arrested was transported to a hospital for treatment of minor injuries, the statement said, as were two uniformed Secret Service officers.

Trump's July Fourth event in Washington, branded as a "Salute to America," drew considerable controversy beforehand for the central role that US military equipment was expected to play, including M1 Abrams tanks and a military plane flyover.

Trump pushed back against criticism of the event, saying the military was "thrilled" to be part of it.