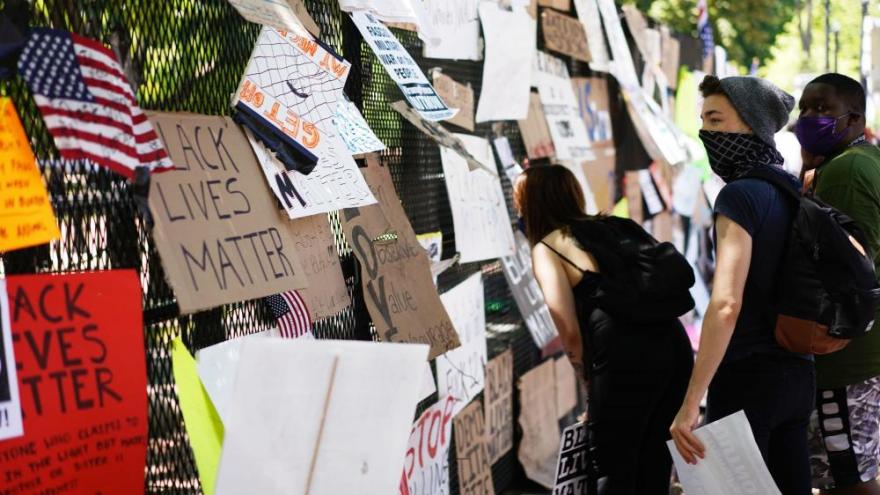 People look at posters and placards on the security fence on the north side of Lafayette Square, near the White House, in Washington, DC.

(CNN) -- Though President Donald Trump hasn't declared "Black Lives Matter," the words are found all along the newly installed temporary fence that borders the White House these days.

Protesters in Washington, met with a barricade in Lafayette Park facing the White House, have affixed the signs they've carried during demonstrations to the temporary fence.

As a result, the site has become a makeshift memorial to black Americans killed by police.

There are balloons for Breonna Taylor's birthday (she would've turned 27 last week). There are paintings of George Floyd and Emmett Till, the black 14-year-old who in 1955 was lynched for allegedly offending a white woman.

There are signs to defund the police and calls to vote Trump out of office.

Protesters are posting more and more art to the wall daily as the demonstrations continue into their second week.

Trump's message to the protesters

Trump, for his part, shared a letter last week that referred to the peaceful protesters who were forcibly dispersed from Lafayette Square as "terrorists."

"The phony protesters near Lafayette were not peaceful and are not real," claimed the letter, which was written by veteran attorney and former Trump lawyer John Dowd, without citing any evidence. "They are terrorists using idle hate filled students to burn and destroy. They were abusing and disrespecting the police when the police were preparing the area for the 1900 curfew."

CNN reported last week that law enforcement used tear gas to disperse peaceful crowds, but the official version of events has repeatedly changed. After initially denying the use of tear gas, a US Park Police spokesperson said it was a mistake to make that statement. Shortly afterward, acting Park Police Chief Gregory T. Monahan again denied tear gas was used.

And after curfew one night last week, low-flying National Guard helicopters kicked up strong winds and debris, an effort to move protesters off the streets.

Still, many of the protests in the capital have been peaceful, attracting the likes of Republican Sen. Mitt Romney and Washington Mayor Muriel Bowser, who marched with the public.