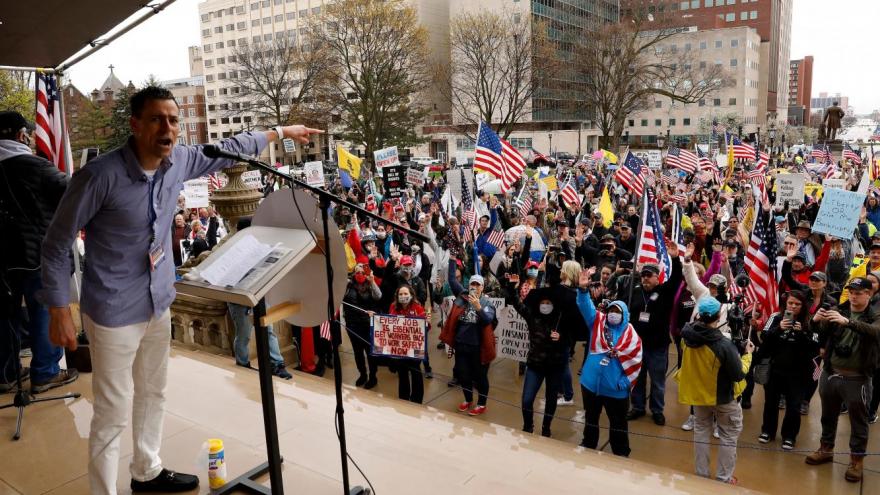 State police estimated between 400 to 700 demonstrators were at the Capitol on Thursday.

(CNN) -- Protesters at the Michigan Capitol on Thursday jammed inside the building where the lawmakers were meeting, demanding an end to the state's state of emergency.

On a cool, rainy day in Lansing, about 400 to 700 people stood on the Capitol grounds, according to Michigan State Police.

Some carried signs about the governor's stay-at-home order, which Gov. Gretchen Whitmer issued in March after a state of emergency was declared. Other demonstrators waved flags.

Whitmer, a Democrat who is at odds with the Republican-majority Legislature over her emergency powers, said she was using independent sources of statutory authority.

"While some members of the legislature might believe this crisis is over, common sense and all of the scientific data tells us we're not out of the woods yet," she said in a statement. "By refusing to extend the emergency and disaster declaration, Republican lawmakers are putting their heads in the sand and putting more lives and livelihoods at risk."

The governor was not at the Capitol on Thursday, her office said.

Protest organizer Ryan Kelley, a Realtor from Grand Rapids, said: "This was a huge win." He said they were supporting the members of the state Legislature who want the state of emergency to expire.

Scores of demonstrators were allowed into the Capitol -- which has been closed to tourists -- but due to social distancing rules in place, only 275 people were allowed inside at a time, according to Lt. Brian Oleksyk, a spokesman for the state police.

Oleksyk said it was a very peaceful protest. "They were chanting peacefully and that was it," he said.

But state Senator Dayna Polehanki tweeted that protesters were directly above her, "men with rifles yelling at us."

"Some of my colleagues who own bullet proof vests are wearing them. I have never appreciated our Sergeants-at-Arms more than today," she added.

A photo she included in her tweet shows four men, at least two of whom have rifles.

It is legal to openly carry firearms in the Capitol.

Kelley said he didn't go into the Capitol and had worked with state police to allow uniformed members of a militia to work security outside.

State police made one arrest outside the Capitol, where one protester had allegedly assaulted another. All protesters had left by 5 p.m. ET, Oleksyk said.

More than 41,000 people in Michigan have been infected with the coronavirus and at least 3,789 have died, according to state health officials. Only two states have more coronavirus-related deaths.