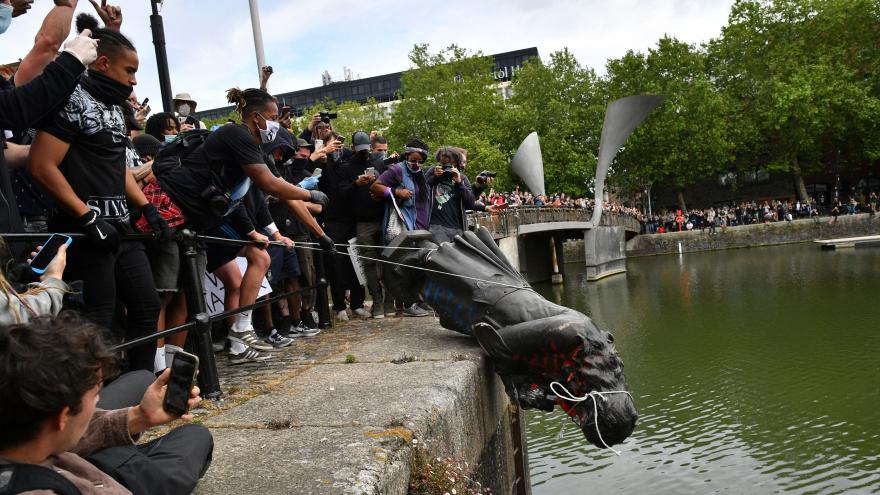 (CNN) -- Activists filled public spaces in huge numbers for the second consecutive weekend to commemorate the death of George Floyd and demand an end to systemic racism -- staging "die-ins" outside US embassies and even tearing down a statue of a former slave trader in the British town of Bristol.

In London, Rome, Madrid, Warsaw, Sydney, Hong Kong and countless other cities, protesters packed streets that have laid deserted for months to tell governments around the world that "Black Lives Matter."

Some defied coronavirus lockdowns and warnings from politicians to do so. Many protesters wore masks during the weekend's rallies, while some carried messages that racial inequality is also a public health crisis.

They marched in solidarity with tens of thousands in the US, whose protests on Saturday were the biggest yet since video of Floyd's death at the hands of a white police officer ignited a wave of anger and action.

But they turned out to draw attention to racial injustice in their own nations, too.

Colonial-era statues ripped down with ropes

In London, thousands congregated outside the US Embassy on Sunday despite British ministers saying that public protests ran the risk of increasing the spread of Covid-19.

Chants of "No Justice, No Peace" and "Black Lives Matter" bounced off the building in the Vauxhall region of the city, with a jubilant atmosphere for much of the day.

"Together, we will let our voices be heard. Enough is Enough. Black people cannot keep suffering," one protester addressed the crowd.

At times, the activists chanted "The UK is not innocent." Others had messages for the US President, with one sign reading: "Black lives trump your ego, Mr. President."

The previous day, activists had descended onto Parliament Square in the center of the city. Protests were peaceful for several hours, but turned heated in the evening when police and crowds faced off outside Downing Street.

In one incident, video posted online showed a police horse suddenly bolting, causing its officer to crash into a street light and fall to the ground. The loose horse then caused panic as it ran through groups of protesters, before making its way back to police stables.

"I stand with you. George Floyd's brutal killing must lead to immediate and lasting change everywhere," London Mayor Sadiq Khan said in a Sunday message to protesters, while condemning the minority who turned violent and reminding activists to try to limit physical interactions.

A number of Boris Johnson's government ministers had previously urged protesters to avoid gathering at all for public health reasons, with Home Secretary Priti Patel saying on Saturday: "I would say to those that want to protest, please don't."

The monument had stood in the city center since 1895 but had become increasingly controversial, with petitions created to demand its removal. On Sunday it was ripped down with ropes to loud cheers from a crowd of demonstrators.

The messages of those protesters were echoed by thousands more around the world.

In Spain, permission was given for demonstrators to assemble outside the US Embassy but, after defying orders from the government, protesters marched through the city to Puerta del Sol -- one of the best-known and busiest places in the city.

Demonstrators were seen holding placards and chanting phrases including "Donald Trump is a criminal."

According to figures released by the government's delegation in Madrid, approximately 2,000 protesters were in attendance; organizers say 4,000 people attended.

Lisa Okpala, a spokeswoman for CNAAEB -- an anti-racism platform in Spain -- told CNN that the purpose of the demonstration was to show support for the Black Lives Matter movement in the US and to "denounce and demonstrate against structural and institutional racism" in the country.

"We felt not only sad because, as I said, racism is a problem here also, but also we felt the rage that the people in the United States are feeling now, especially the black community. So, there is a mix between sadness and rage," Okpala said.

Activists there took a knee in silence for a full eight minutes in a symbolic tribute to Floyd, who died after police officer Derek Chauvin pressed his knee on his neck for 8 minutes and 46 seconds.

During the demonstration, the protesters were addressed by representatives of Italy's migrant community and American expatriates; the names of all those killed in the US as a result of police brutality were listed and commemorated by the crowd.

While the large gathering made it difficult for protesters to adhere to the government's social distancing guidelines, those demonstrating in the piazza were seen to be attempting to maintain a one-meter gap between themselves, with many also wearing masks and face coverings.

Meanwhile in Warsaw, streets were lined outside the American embassy. The previous day, crowds have swarmed through Paris and other French cities like Lille, Marseille, and Nice.

Hours earlier, cities in Australia had been similarly active.

A court in the country overturned an injunction that banned a march and rally in Sydney on Saturday, allowing thousands to gather in the city.

Performances from Aboriginal protesters took place, and demonstrators held banners calling for an end to deaths in police custody both in the US and in Australia.

New South Wales state officials had sought to ban the protest due to social distancing concerns and received an injunction Friday night. The New South Wales Court of Appeals overturned it in time for the actions to take place.

Another rally took place in Brisbane and Melbourne.

In Hong Kong, smaller crowds gathered outside the Consulate General of the United States. And in Seoul, South Korea, activists in face masks held up signs on Saturday to commemorate Floyd's death.