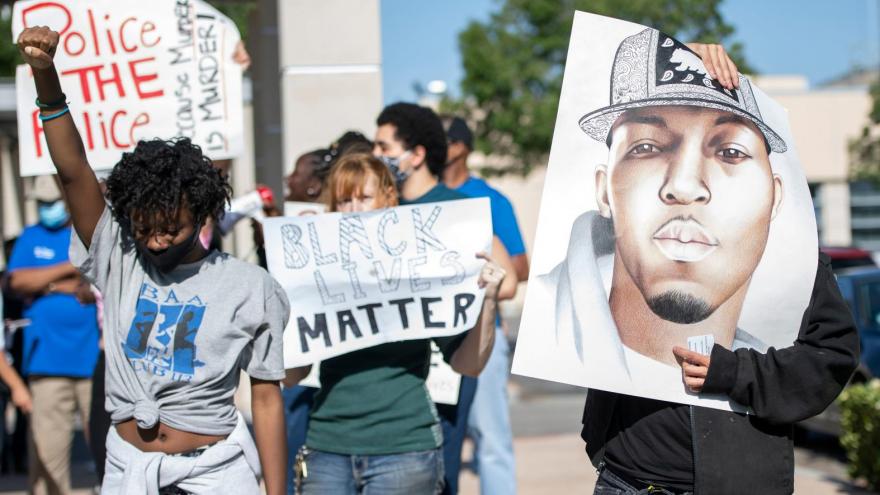 A woman raises her fist next to a person holding a portrait of Malcolm Harsch during a protest over the death of Harsch, a black man who was found hanging from a tree, June 16, 2020, in Victorville, California.

Princess Berry, who has been protesting the death of George Floyd in police custody, joined to protest the deaths of Robert L. Fuller, 24, and Malcom Harsch, 38.

"People are trying to intimidate us and stop us from coming out here protesting. And to show us, 'This is what we can do.' And apparently, it's like they weren't even investigating it. So they can get away with it," Berry said.

The Department of Justice and the FBI announced Monday they will review the hanging death of Fuller, who was found hanging from a tree early last Wednesday in Palmdale, as well as that of Harsch 10 days earlier in San Bernardino County.

But Fuller's family announced Tuesday that they are seeking an independent investigation and autopsy to determine the cause of his death.

"The Sheriff's Department immediately declared his death a suicide without completing a full and thorough investigation," attorney Jamon R. Hick said. "For African Americans in America, hanging from a tree is a lynching. Why was this cavalierly dismissed as a suicide and not investigated as a murder?"

Palmdale, where Fuller died, and Victorville, where Harsch died, are about 50 miles apart.

Victorville Police said Harsch's manner of death has not yet been determined. Mayor Gloria Garcia said in a statement on Tuesday that a thorough investigation is being conducted.

"We take very seriously the concerns voiced by so many who fear that Malcolm's death could be racially motivated, a hate crime, or a form of retaliation," Garcia said. "Malcolm Harsch's life matters to our City."

Fire department personnel responded to the scene of Fuller's death early last Wednesday, the Los Angeles County Sheriff's Department said in a statement. His death was described as "an alleged suicide."

Despite Fuller's death being consistent with suicide, officials "felt it prudent to roll that back and continue to look deeper," said Los Angeles County Medical Examiner Coroner Dr. Jonathan Lucas.

"Hangings in public, suicides, do occur with some regularity," Lucas said. The signs seemed to point in the direction of suicide, but the cause and manner of death were never officially determined as officials await further investigation and toxicology reports. An autopsy was completed last Friday.

Nothing but the rope, the contents of Fuller's pockets and a backpack he was wearing were found on the scene, according to Los Angeles County Homicide Capt. Kent Wegener.

Investigators are researching Fuller's medical history, looking for the witness who reported the hanging and searching for contacts in Arizona and Nevada. They will also analyze Fuller's cell phone and are looking for neighborhood surveillance video.

Authorities plan to interview Fuller's case worker at the Department of Public Social Services as well as anyone who may have had contact with Fuller.

Harsch found in a homeless encampment

Dispatchers received a call from a woman May 31 at 7:07 a.m. saying her boyfriend, Harsch, hanged himself, according to a news release from the San Bernardino County Sheriff's Department. The release said Harsch was found at a homeless encampment.

When Victorville Fire crews arrived, they saw bystanders performing CPR on Harsch, Victorville police spokeswoman Sue Jones said in a statement. Fire personnel then began advanced live support care protocol, but could not revive him after 20 minutes of effort, the statement said.

Investigators did not find any evidence of foul play. An autopsy was conducted on June 12 and there are still no signs of foul play, the release said. The forensic pathologist is waiting for toxicology results before assigning the cause and manner of death.

Sheriff Villanueva in Los Angeles County said his department intends to have conversations with officials in San Bernardino County.