Protests break out in Myanmar in defiance of military coup 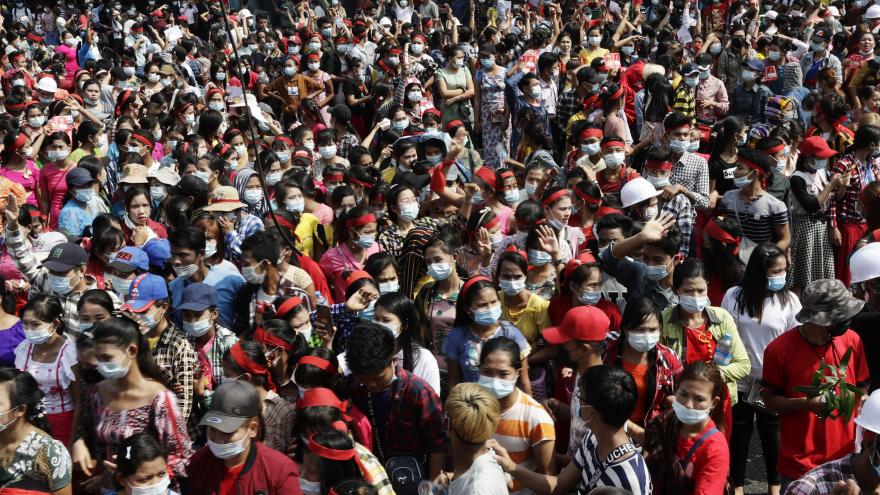 (CNN) -- An Australian adviser to Myanmar's recently deposed civilian leader Aung San Suu Kyi was detained on Saturday as pro-democracy protests broke out in the country's largest city on Saturday.

Thousands of people took to the streets of Yangon in the first major organized demonstration since the military seized power in a coup earlier this week.

The crowd, many of whom could be seen waiving flags and holding banners, called for the military to release Suu Kyi, and other democratically-elected lawmakers, who were detained in pre-dawn raids Monday.

Chants of "We demand democracy" could be heard coming from the crowd as they marched close to downtown Yangon, prompting the government to impose an internet blackout.

Dozens of police, some in riot gear, had initially attempted to block the protest route, forcing the crowd to change direction.

During the earlier large-scale march, passers-by could be seen giving the three-finger salute of opposition to army rule, in apparent solidarity with those demonstrating. Others were seen applauding and handing out water to both protesters and police in what one witness described as a way of defusing tension.

Witnesses described the crowd as expanding in size, before appearing to disperse after several hours. But a number of smaller, scattered protests remained ongoing including one at Yangon University, where several hundred mostly young people gathered and continued to chant.

Resistance to the coup had initially proved limited, due in part to widespread communications difficulties, as well as fears of a further crackdown.

Internet monitoring service NetBlocks said Saturday that the country was in the midst of a second "national-scale" internet blackout as the military attempted to secure its grip on power.

According to NetBlocks, real-time network data showed connectivity had fallen to 54% of ordinary levels and users had reported difficultly getting online.

The Myanmar Ministry of Transport and Communications (MoTC) ordered the nationwide shutdown of the data network on Saturday, according to Norwegian telecommunications company Telenor Group, which runs Telenor Myanmar.

The group, writing on Twitter, said the ministry cited "Myanmar's Telecommunication Law, and references circulation of fake news, stability of the nation and interest of the public as basis for the order."

While voice calls and SMS remain operational, Telenor Group said it was deeply concerned by the internet shutdown, but said Telenor Myanmar is a local company and is therefore "bound by local law and needs to handle this irregular and difficult situation."

"We deeply regret the impact the shutdown has on the people in Myanmar," Telenor said.

Witnesses told CNN that internet connection has been intermittent on Saturday, though some people were still able to stream video from the march in Yangon on social media platforms.

The Australian adviser to Suu Kyi, Sean Turnell, told Reuters that he had been detained on Saturday. "I guess you will soon hear of it, but I am being detained," he told Reuters reporters in a message.

"Being charged with something, but not sure what. I am fine and strong, and not guilty of anything," he said, with a smile emoji.

Turnell is a professor of economics at Macquarie University, but according to his page on the university's website, he is currently on leave while working as a senior economic adviser to the government of Myanmar.

In a statement released on Saturday, Australia's Department for Foreign Affairs and Trade [DFAT] raised concerns about the detention of an Australian citizen.

"The Australian Government is deeply concerned about reports of Australian and other foreign nationals being detained arbitrarily in Myanmar," it wrote.

"In particular, we have serious concerns about an Australian who has been detained at a police station" it added.

The DFAT said they have "called in the Myanmar Ambassador and registered the Australian Government's deep concern about these events."

For more than 50 years, Myanmar -- also known as Burma -- was run by successive isolationist military regimes that plunged the country into poverty and brutally stifled any dissent. Thousands of critics, activists, journalists, academics and artists were routinely jailed and tortured during that time.

Recently deposed civilian leader Suu Kyi shot to international prominence during her decades-long struggle against military rule. When her party, the NLD, won a landslide in elections in 2015 and formed the first civilian government, many pro-democracy supporters hoped it would mark a break from the military rule of the past and offer hope that Myanmar would continue to reform.

The NLD was widely reported to have won another decisive victory in a November 2020 general election, giving it another five years in power and dashing hopes for some military figures that an opposition party they had backed might take power democratically.

The sudden seizure of power came as the new parliament was due to open and after months of increasing friction between the civilian government and the powerful military, known as the Tatmadaw, over alleged election irregularities. The country's election commission has repeatedly denied mass voter fraud took place.

Hundreds of NLD lawmakers were detained in the capital Naypyitaw Monday, where they had traveled to take up their seats. The junta has since removed 24 ministers and deputies from government and named 11 of its own allies as replacements who will assume their roles in a new administration.

Analysts have suggested the coup was more likely to do with the military attempting to reassert its power and the personal ambition of army chief Min Aung Hlaing, who was set to step down this year, rather than serious claims of voter fraud.

"Facing mandatory retirement in a few months, with no route to a civilian leadership role, and amid global calls for him to face criminal charges in The Hague, he was cornered," Jared Genser, an international human rights lawyer who previously served as pro bono counsel to Suu Kyi, wrote for CNN this week.

Monday's coup has been widely condemned internationally, with the United States calling on Myanmar's military leaders to "immediately relinquish the power they have seized, release the activists and officials they have detained, lift all telecommunications restrictions, and refrain from violence against civilians."